Now we can begin to understand the reasons for the troposphere’s typical temperature profile. The atmosphere is mostly transparent to the incoming solar visible radiation, so Earth’s surface warms, and thus warms and moistens the air above it. This warm, moist air initially rises dry adiabatically, and then moist adiabatically once a cloud forms. Different air masses with different histories and different amounts of water mix and the result is a typical tropospheric temperature profile that has a lapse rate of (5–8) K km-1.

But many processes affect the temperature of air at different altitudes, including mixing of air parcels, sometimes even from the stratosphere, and rain and evaporation of rain. Exchange of infrared radiation between Earth’s surface, clouds, and IR-absorbing gases (i.e., water vapor and carbon dioxide) also plays a major role in determining the atmosphere’s temperature profile, as we will show in the lesson on atmospheric radiation.The resulting atmospheric profiles can have local lapse rates that can be anywhere from less than the dry adiabatic lapse rate to greater than the moist adiabatic lapse rate. Look carefully at the temperature profile below. You will see evidence of many of these processes combining to make the temperature profile what it is.

The most recent Skew-T Log-P diagram created from the radiosonde launched from Edmonton, Alberta (CWSE). The date can be seen in the bottom left, and the time is in UTC time.
Credit: National Center for Atmospheric Research (NCAR) (Public Domain)

Combining knowledge of stability along with the knowledge of moist processes enables us to understand the behavior of clouds in the atmosphere. The following picture of water vapor released from a cooling tower at the Three-Mile Island nuclear reactor near Harrisburg, PA shows the water vapor quickly condensing to form a cloud. The cloud ascends, but then reaches a level at which its density matches the density of the surrounding air. The cloud then stops ascending and begins to spread out. 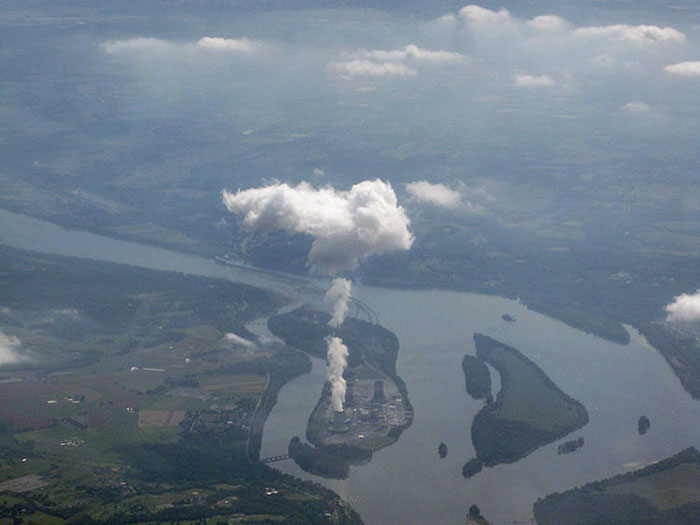 Water vapor plume rising from the Three-Mile Island nuclear power plant near Harrisburg, PA. The mushroom shape is due to the temperature profile in the lowest part of the troposphere.
Credit: W. Brune © Penn State is licensed under CC BY-NC-SA 4.0
‹ 3.5 The Skew-T Diagram: A Wonderful Tool! up Summary and Final Tasks ›
METEO 300 Fundamentals of Atmospheric Science