What is vapor pressure? Because of the Ideal Gas Law (Equation 2.1), we can think of vapor pressure e (SI units = hPa or Pa) as being related to the concentration of water vapor molecules in the atmosphere,

where n is the number of moles per unit volume (n = N/V). 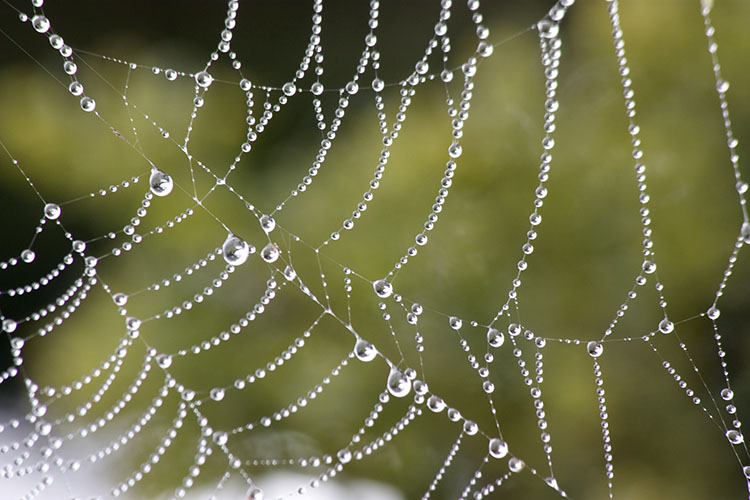 Water vapor condensed into liquid drops on a spider web overnight. As the sun rises and the air heats up, there will be net evaporation and the beads will shrink and disappear during the day.
Credit: Spider web with dew drops by devra from Flickr is licensed under CC BY 2.0.

Think about a liquid water surface on a molecular scale. What is happening all the time is that some water molecules in the gas phase are hitting the surface and sticking (i.e., making hydrogen bonds), while at the same time other water molecules are breaking free from the hydrogen bonds that tie them to other molecules in the liquid and are becoming water vapor. The water vapor surface is like a Starbucks, but even busier. We can easily calculate the flux of molecules that are hitting the surface using simple physical principles, although it is harder to calculate the number that are leaving the liquid. Both are happening all the time, although usually the amount of condensation and evaporation aren't the same, so that we usually have net evaporation or net condensation.

So we know that the amount of water in vapor phase determines the condensation rate and thus e. So what determines es? We will see next that es depends on only one variable: temperature!