Earth’s atmosphere is essentially always in radiative energy balance, which is also called radiative equilibrium. By this, I mean that, when averaged over the whole Earth, the total amount of solar radiation energy per second that is absorbed by the Earth’s surface and atmosphere is about equal to the total amount of infrared radiation energy per second that leaves the Earth’s surface and atmosphere to go into space. There can be periods when this balance is not exact because changes in atmospheric or surface composition can alter the absorption or scattering of radiation in the Earth system. It can take a little while for all of the temperatures of all of the Earth system's parts to adjust, but if the changes stop, the Earth system will adjust its temperatures to come back into balance. Right now we are in a period where atmospheric CO2 concentrations are increasing due to industrialization, the outgoing infrared radiation is slightly less than the incoming absorbed solar radiation, and the Earth system's temperatures are adjusting (by increasing) to try to bring the outgoing infrared radiation into balance with the incoming absorbed solar radiation. For most of the following discussion, we will use this concept of radiative equilibrium even though the current balance is not exact.

Always keep in mind that atmospheric radiation moves at the speed of light and that all objects are always radiating. Moreover, as soon as an object absorbs radiation and increases its temperature, its emitted radiation will increase. Thus energy is not “trapped” in the atmosphere and greenhouse gases do not “trap heat.” We will see instead that greenhouse gases act like another radiation energy source for Earth’s surface. 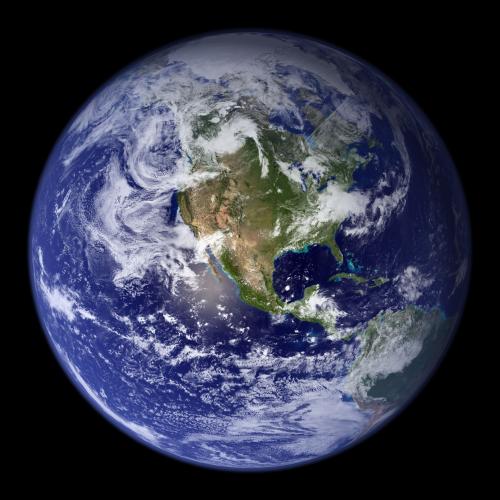 Image of Earth in the visible. Clouds are scattering radiation at all visible wavelengths back out to space, and thus appear to be white, while Earth's surface selectively scatters visible radiation at only some wavelengths and absorbs the rest.
Credit: NASA 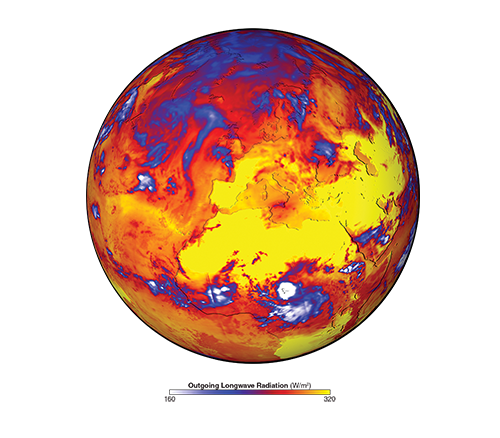 Image showing outgoing longwave (infrared) radiation emitted by the Earth and atmosphere during the European heatwave of 2003. The blue and white colors are clouds, which are radiating at the lower temperatures of the upper troposphere, while the yellows are the Earth's surface and the lower troposphere, which are radiating at higher temperatures.
Credit: NASA

Here is another chance to earn 0.2 points of extra credit: Picture of the Week!