4.6 Where do cloud condensation nuclei (CCN) come from?

4.6 Where do cloud condensation nuclei (CCN) come from?

Now that you've learned about the atmosphere’s gas-phase composition, it is time to look at its particle composition. We are interested in atmospheric particles for several reasons:

Atmospheric aerosol is most obvious to us on warm and muggy summer days. Under these conditions, there are lots of aerosol particles and they absorb water and swell up to a size that is quite efficient at scattering sunlight. The following picture was taken over Maryland on a flight between Washington Dulles airport and State College airport. Above the fair-weather cumulus clouds is blue sky in the free troposphere. Below the clouds is the atmospheric boundary layer, which is filled with aerosol that has been well-mixed by warm, moist air parcels rising and stirring the boundary layer air. The haze is so thick that it is a little hard to see the ground. 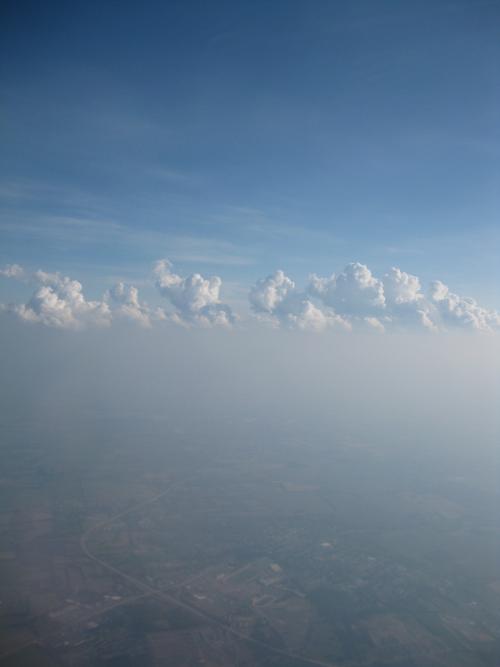 Atmospheric particles come from many different sources. Good cloud condensation nuclei (CCN) must be small particles, so that they do not settle too fast, and must be hydrophilic, which means that water can stick. They can be either soluble (i.e., dissolvable in water), or insoluble, but most are soluble.

Most particles originate from emissions from Earth’s surface. Primary aerosols are emitted directly from the source, although the smaller ones start off as hot gases that rapidly condense to form particles even before they leave the smokestack or tailpipe. Secondary aerosols are gaseous emissions that are converted to aerosol particles by chemical reactions in the atmosphere. Some of these become CCN. This process is often called gas-to-particle conversion. Most CCN are secondary aerosols.

The sources of aerosols are both natural and anthropogenic (human-made). Seaspray, volcanoes, forests, and forest fires, as well as gas-to-particle conversion of naturally occurring gases such as sulfur dioxide (SO2) and some naturally occurring VOCs, such as α-pinene (which gives the pine smell) are important natural particle sources. Industry, power plants, using fires to clear cropland, transportation, and gas-to-particle conversion of anthropogenic SO2 and numerous other gas emissions are important anthropogenic particle sources. 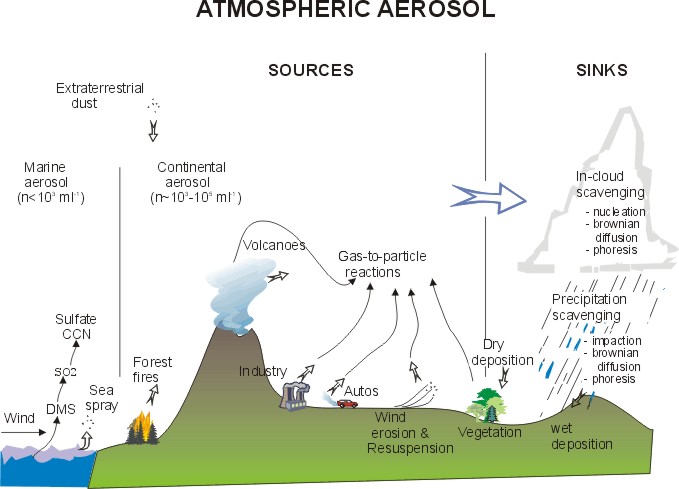 The different sources make particles of different sizes. The typical size distribution (i.e., number of particles in a volume of air, plotted as a function of size) has bumps in it, with more particles at some sizes than at others, as seen in the diagram below. Reading these bumps tells us a lot about how the particles were made.

The nucleation mode (there are other designations for this) includes particles that are made by gas-to-particle conversion. A low-volatility vapor is one that will condense onto particles or other surfaces when its vapor pressure exceeds its low saturation vapor pressure. This situation is analogous to water.

The coarse mode includes particles made by mechanical processes. The hydrophilic coarse particles can be CCN, but they settle out pretty fast. 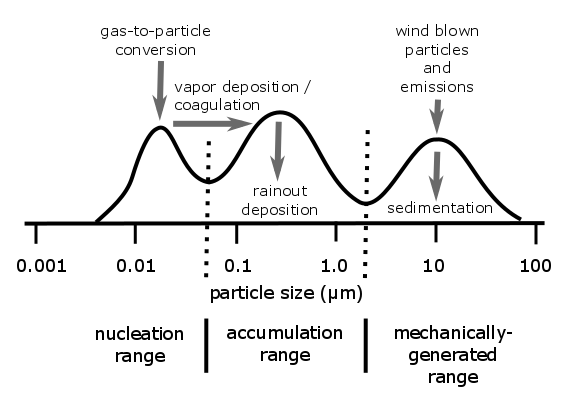 Secondary particles start with the emission of VOCs or sulfur compounds, which react mainly with OH to start a sequence of reactions. These reactions tend to add oxygen to the molecules, which chemically makes them stickier (with a lower saturation vapor pressure) and more water soluble, which is just what is needed to make them better cloud condensation nuclei.

For particles that start as gaseous sulfur compounds, such as sulfur dioxide (SO2), the reaction sequence starts with OH and the reaction product is sulfuric acid, a compound that has a very low vapor pressure and is very sticky:

Sulfuric acid is easily taken up into cloud drops and raindrops and then can be deposited on Earth’s surface when it rains. The good news is that the rain cleans the atmosphere. The bad news is that the rain is very acidic and has earned the name “acid rain” because of its harmful effects on forests and on buildings, memorials, and statues.

We can demonstrate gas-to-particle conversion of a VOC that is often emitted into the atmosphere by trees. This compound is limonene and also comes from oranges. In the video (4:47) below entitled "Demonstration of Gas-to-Particle Conversion," I will use orange peel to demonstrate this effect.

Today I'm going to show you how particles can come from gases. So what I have here is I have an artificial atmosphere right here, a glass jar. I have a light source in there, which will act like the sun, so here's the sun right here. I'll set the sun. Sun's off right now. And then I have a source of gases, an orange. So let me first peel the orange. Let's peel the orange here. A little bit of orange. Take some peel off the orange. OK, that's enough. So now here we have some orange peel. That smells really good. So what I'm going to do is take some orange peel and squeeze it a little bit, and I'm going to drop it in the atmosphere. Squeeze some more and drop it in the atmosphere. Now I'll put the lid on the atmosphere. OK. There we go. Now you see I have orange peel here and so there's some gases that smell really good, these volatile organic compounds. So I can smell, and they smell great. And I'm going to show you that even though I put that in there, I have a light source. Here's a little laser, just a laser pointer, and you see I'm shining it in there and you don't really see any particles at all in here. So look in here and there are no particles. See that? No particles. OK, now I'm going to turn on the sun, which is this nice ultraviolet light here. So I'll turn on the sun, and we're just going to wait a little bit. So the sun is on. You can see it glowing here and here. And so what that's doing is that's producing lots and lots and lots of OH, the hydroxyl radical. And it's also producing lots of ozone, and so it's doing what the atmosphere does, which is oxidizing the volatile organic compounds that came from the orange peel. Those volatile organic compounds, one of the main ones is called limonene, which is of course also in lemons and limes. And so we are just going to let that cook a little bit and let the day go on a little bit. And then what we can do is we can see if we're making any particles. So let me shake it up a little bit like there's a little bit of a wind. There we go. So now you see we have a very bright light from the lamp. It's really gotten bright. And we can see that it's doing a lot. Heat it up a little bit more. Now we'll just take a quick look and see if we see anything. So the laser light here we can't see anything in the atmosphere outside of the chamber, so I'm shining it. Right now this is hitting my hand, as you see here. And there's no sort of scattering. But I've turned off the light now. Now we shine this in here, and we see a tremendous beam. And so all this is small particles that we made which are now scattering that light. See you can see that very strong beam. And all those particles came from the volatile organic compounds, limonene and others, that came out of the orange peel and then they were oxidized in the atmosphere to make less volatile compounds, one that had lower vapor pressure, and then those all stuck and made these nice little particles that you see here. So there's a demonstration of gas to particle conversion.

‹ 4.5 The Story of the Atmosphere's PAC-MAN up Summary and Final Tasks ›
METEO 300 Fundamentals of Atmospheric Science