The Outer or Jovian Planets

Through even a small telescope, both Jupiter and Saturn look beautiful. Many people, myself included, feel that Saturn is by far the most beautiful of all of the planets. Much of Saturn's aesthetic appeal comes from its magnificent ring system. 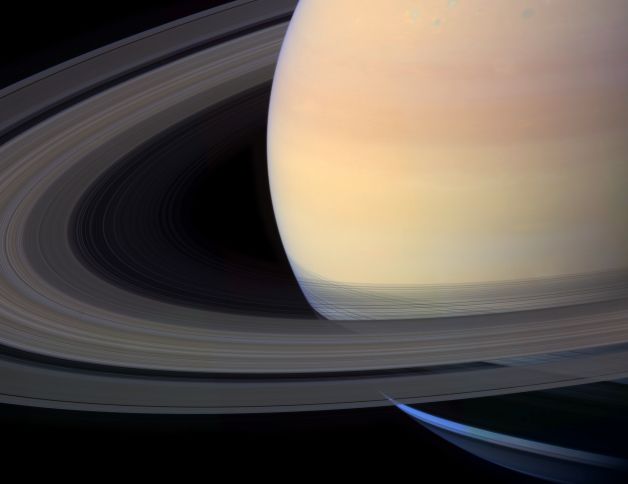 The rings of Saturn orbit the planet around its equator, and, although they are very thin, they extend out almost 300,000 kilometers from the planet. The pair of images from Hubblesite shown below will help you understand exactly how thin they are—when we see them nearly edge-on, they almost disappear! 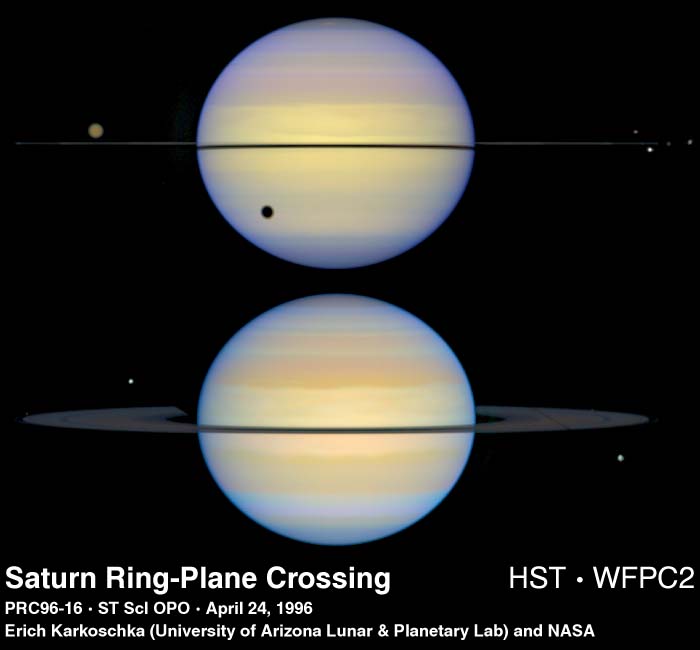 Even though they are 300,000 kilometers in radius, Saturn's rings are only about 20 meters thick. An analogy is to picture a compact disc (CD) that is the same thickness as usual, but 30 kilometers (about the size of an average town) in diameter!

The rings of Saturn were probably created by the destruction of an object that got too close to the planet. We know that Saturn's rings are made up of many small particles. Even though they look like they may be solid in all of the images that you have seen, they are not! If you look back at our discussion of tides in the last lesson, we studied how the gravitational force of the Moon deforms the Earth and vice versa. If you think about it, if a tidal force is strong enough, it might be able not only to deform an object, but also to actually break the object into pieces. There is a limit, called the Roche limit, which is a roughly spherical region that surrounds each planet (and star). Outside the Roche limit, an object will be deformed by the planet's tidal force, but will otherwise be OK. If an object gets inside the Roche limit, though, the tidal force from the planet will be stronger than the force of gravity holding the object together, so it will be destroyed. The rings of Saturn are inside of the Roche Limit for this planet, so it seems likely that they were formed by the disruption of some massive object.

From the ground, there only appear to be a few rings with a relatively wide, dark gap called the Cassini Division between the rings. However, views from spacecraft like Voyager and Cassini show that the rings are actually made up of many thin ringlets. It appears that there may be up to several hundred thousand ringlets.

Other than its ring system, however, Saturn is in many ways similar to Jupiter. It is the second most massive and second largest planet in the Solar System. Saturn rotates once on its axis very quickly, about 11 hours, which is very similar to Jupiter, which rotates in approximately 10 hours. If you look at an image of the whole disk of Saturn, you find that it appears to be not quite spherical, but it is flattened because of its fast rotation. Saturn is, again, primarily a gaseous planet with perhaps a small solid core, but its density is significantly different from Jupiter's—it is 0.7 g / cm3, which is less than water! An often repeated joke is that if you could build a bathtub big enough, Saturn would float, but it would leave a ring.

In most pictures, Saturn's atmosphere appears to have less structure than Jupiter's. This is very likely because the colder temperature of Saturn causes different chemical reactions to occur in the atmosphere. However, if you process the images to enhance the contrast, you will see that the atmosphere of Saturn does show many of the same structures that we see on Jupiter, as shown in these Hubblesite images:

Every planet that we have studied so far was known to ancient astronomers because they are all visible to the unaided eye. Uranus and Neptune, however, are only visible with a telescope. In many ways, these two planets seem similar, but when we study them in some detail, we will find that they have some significant differences. Both Uranus and Neptune are gaseous planets like Jupiter and Saturn, but they are much smaller. They are both about 4 times the diameter of the Earth, and they are about 15 times more massive than Earth. Although this is large, for perspective it is 20 times less massive than Jupiter. 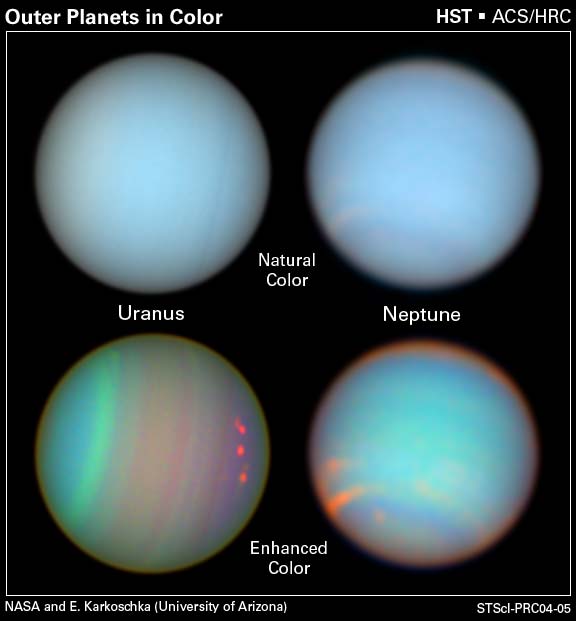 Images of these two planets show that in natural color, Uranus and Neptune look to be a blue-green color. This is usually attributed to the presence of a mix of methane and molecular hydrogen in the atmospheres of these planets. The atmosphere of Uranus appears to be very plain. It does not show banding, storms, or any of the features seen on Jupiter or Saturn. However, the Voyager satellite did show dark spots on Neptune that appear to be storms similar to the Great Red Spot on Jupiter.

It seems very strange that Neptune should show such strong evidence of activity in its atmosphere when Uranus does not. In the case of Uranus, it is very cold—only about 58 kelvin. It also does not show any evidence of generating energy in its interior, so it is believed that the lack of internal energy generation keeps the atmosphere from creating the prominent structures seen in Jupiter and Saturn. Neptune is even more distant than Uranus, so we expect that it should be colder. The measurement that Neptune is 59 kelvin (that is, slightly warmer than Uranus) suggests that it does generate energy, emitting almost 3 times as much light as it receives from the Sun. So, it may be that it requires internal energy generation to create the strong weather patterns in the gas giants. Why, then, is Uranus the only Jovian planet which does not appear to generate energy in its interior?

Recent observations by Hubble shows that Uranus' atmosphere is beginning to show new structure. Uranus, it turns out, has a very strange rotation. Most of the planets rotate so that the poles of their rotation are pretty closely aligned with the poles of their orbit. Another way to visualize this is that the equator of most planets is aligned with the plane of the planet's orbit around the Sun. However, the pole of the rotation of Uranus is almost perpendicular to its orbit. That is, the pole of Uranus' rotation is tilted by almost 90 degrees compared to that of Earth. Because of this, Uranus keeps its pole pointed towards the Sun and not its equator. So for about 1/4 of its orbit, its South Pole never sees the Sun, and for 1/4 of its orbit, its North Pole doesn't see the Sun. It takes Uranus 84 years to orbit the Sun once, and just a few years ago its South Pole started getting sunlight again. This may be why its atmosphere is beginning to increase its activity compared to when Voyager visited decades ago. Thus, it may be that Uranus' odd rotation may be responsible for its apparent difference from the other Jovian planets in terms of its internal energy generation.

‹ Jupiter up Rings and Jovian Moons ›
ASTRO 801: Planets, Stars, Galaxies, and the Universe