Studying blackbody radiation is a useful exercise. However, I have stressed a few times that blackbody radiation is only emitted by an “ideal” or “perfect” radiator. In reality, few objects emit exactly a blackbody spectrum. For example, consider the two spectra you looked at on a previous page: the sun and a blue straggler star. Recall that blackbody radiation is continuous with no breaks. If you look at the two spectra of stars, you see there are black bands in the image of the sun’s spectrum and areas in the plot where the intensity goes to zero or nearly zero in the spectrum of the blue straggler. These gaps in the spectrum where there is no light emitted are called absorption lines. Other astronomical sources (and also light sources you can test in a lab) are found to create spectra that show little intensity at most wavelengths but a few precise wavelengths where a lot of intensity is seen. These are referred to as emission lines.

In the early days of spectroscopy, experiments revealed that there were three main types of spectra. The differences in these spectra and a description of how to create them were summarized in Kirchhoff’s three laws of spectroscopy:

You can also summarize Kirchoff's laws in a diagram, like this one: 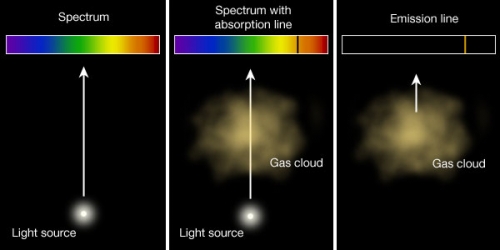 Figure 3.6: The three conditions that give rise to the three Kirchoff's laws for the creation of a continuous, absorption, and emission spectrum.
Credit:  Penn State Astronomy & Astrophysics

Like Kepler's laws of planetary motion, these are empirical laws. That is, they were formulated on the basis of experiments. In order to understand the origin of absorption and emission lines and the spectra that contain these lines, we need to first spend some time on atomic physics. Specifically, we will consider the Bohr model of the atom.

Whenever you are studying the light from an astronomical object, recall that there are three things you need to consider:

We observe absorption lines when the light from a background source passes through a cool gas. Somehow, it is the gas that causes the absorption lines to appear in what would otherwise appear to be a continuous spectrum. So, what is going on inside the gas?

A cloud of gas is made up of atoms, which are the smallest components of an element that retain all the properties of that element. A typical cloud of gas in space is likely to contain a lot of hydrogen and helium and trace amounts of heavier elements, like oxygen, nitrogen, carbon, and perhaps iron. The atoms inside the cloud of gas are made up of a nucleus of positively charged protons and neutrons, which have no charge. Surrounding the nucleus are one or more negatively charged electrons. Here is a cartoon image I put together of a helium atom: 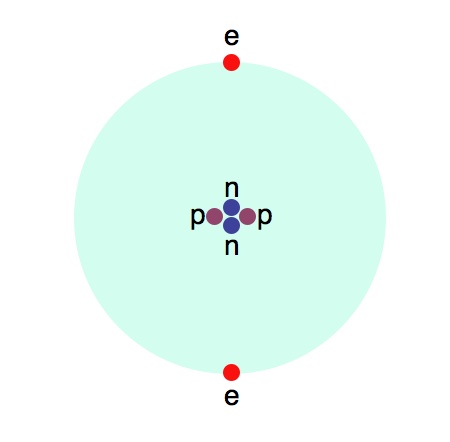 The particles labeled n are neutrons, p are protons, and e are electrons.

For a bit more background and information on models of the atom, see a description by the folks at the Jefferson Lab.

Returning to atomic physics and spectroscopy, it is the electrons that are the primary cause of the absorption lines we see in stellar spectra. Bohr proposed a simple model for atoms that required the electrons to occupy “orbits” around the nucleus. The crucial part of his model is to understand that the electrons can only exist in these specific orbits, and not in between. Each orbit has a specific energy associated with it—that is, when the electron is in a specific orbit, it has a specific amount of energy. Thus, the orbits can also be referred to as energy levels. If an electron absorbs exactly the energy difference between the level it is in and any higher level, it can move up to a higher level. Once an electron is in a higher level, it will eventually fall back down to a lower level (either all at once back down to level 1, or by a series of steps down to level 1), and each time it falls from one level to a lower one, it emits a photon that carries exactly the amount of energy equal to the difference in energy between the starting energy level and the ending energy level of the electron. This is shown below. In the top panel, the electrons are falling from higher levels to lower levels and are emitting photons. In the lower panel, the electrons are absorbing photons, causing them to jump to higher levels from their lower levels. 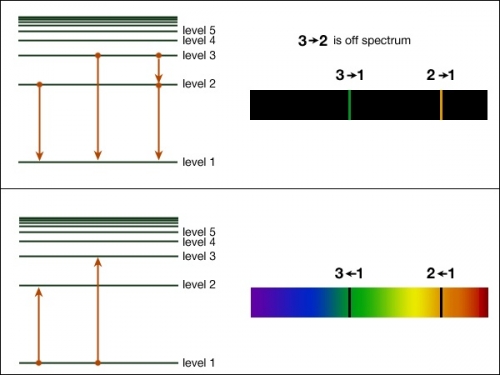 Figure 3.8: Energy levels of electrons in Bohr model and how those correspond to the wavelengths of an absorption or emission line in an object's spectrum.
Credit:  Penn State Astronomy & Astrophysics

and in this case

In the top panel above, there is an electron dropping from level 2 to level 1 and emitting a photon with an energy equal to the energy difference between those two levels. So, an astronomer studying the light from that cloud of gas will see an emission line in the spectrum of that cloud with a yellow color, the one labeled "2 - 1" in the spectrum on the right.

Let's tie this idea of electrons moving between energy levels back to the observed spectra of astronomical objects.

A continuous source of light emits photons with all different energies. When these photons pass through a foreground cloud (or clouds) of gas, they can encounter the atoms in that gas, each of which has a set of electrons with specific energy levels. Those photons that have precisely the correct energy to kick an electron in an atom of the gas up to a higher level can be absorbed. All those photons that do not have the exact amount of energy to excite an electron pass through the cloud without being absorbed. Thus, what we see after light from a blackbody (that is, the continuous source) passes through a cloud of gas is that most of the photons in a narrow range of frequency (or color) don't make it, leading to breaks, or absorption lines, in the otherwise continuous spectrum of the light source. The absorption lines all correspond precisely to wavelengths or frequencies that are determined by the energy difference between the energy levels of electrons in the atoms that make up the cloud. So, again referring to the energy level diagram above, when an electron goes from level 1 to level 2 by absorbing a photon, an astronomer will observe an absorption line at the frequency that corresponds to that 1 - 2 energy level difference.

At the website for the PhET Interactive Simulations, they have a simulation that allows you to investigate models of the Hydrogen atom.

If you have a low density cloud of gas that is being warmed by some process, the electrons in the atoms in that cloud of gas will not be in the lowest level—they will be in higher levels. So, as they cascade down to the ground level, they will emit photons with precise frequencies, giving rise to emission lines. Neon lights you see in store windows contain low density gas, and the electrons get excited when you run current through the bulb. As the electrons cascade down to the ground level (level 1), they emit emission lines in the red part of the spectrum. Here is an image of a neon containing bulb, and the spectrum it creates when you pass its light through a prism: 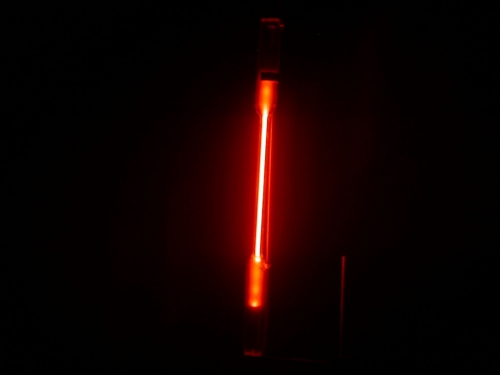 Figure 3.9: Light from a neon bulb
These Supplemental Materials accompany the article "Simultaneous Display of Spectral Images and Graphs Using a Web Camera and Fiber-Optic Spectrophotometer" Niece, Brian K. J. Chem. Educ., 2006, 83, 761-764 and are provided with the permission of the Journal. 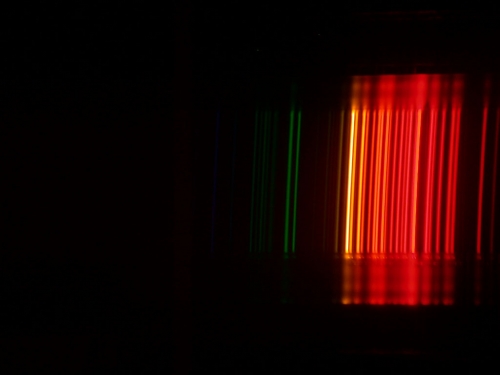 Figure 3.10: Spectrum from a neon bulb
These Supplemental Materials accompany the article "Simultaneous Display of Spectral Images and Graphs Using a Web Camera and Fiber-Optic Spectrophotometer" Niece, Brian K. J. Chem. Educ., 2006, 83, 761-764 and are provided with the permission of the Journal.

Finally, let's end this discussion of spectra with a few consequences of the above physics: