Using the unaided eye, from most sites on Earth, you can observe several hundred stars each night. Although the stars all appear as pinpoints of light from our point of view, we have already discussed how telescopes have revealed that many of these stars are binary stars. That is, they are pairs of stars bound together by their mutual gravity. When we studied star formation, we learned that the types of clouds of gas that form stars fragment as they collapse, and that star forming regions tend to form many stars simultaneously and not one at a time. If you survey the sky with a telescope, you can quickly find some regions of the sky that contain examples of clusters of stars. That is, there are regions of space that contain hundreds, thousands, or even millions of stars.

There is one obvious example of a star cluster that is visible to most observers in the winter from the northern hemisphere, and that is the Pleiades. You have probably seen a picture of the Pleiades before, but here is an excellent one. 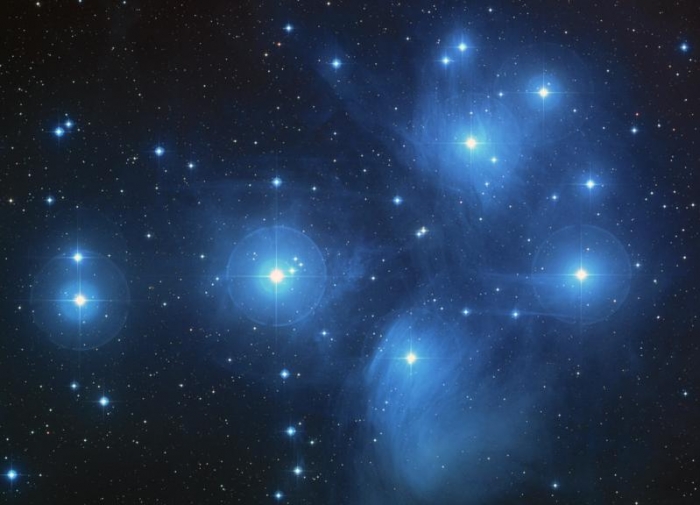 Incidentally, the Pleiades is a favorite target of astrophotographers, and there are several other very beautiful pictures of the cluster available from APOD (note that there are even more than this, these are just the ones I think are the nicest):

This group of stars is also the logo of the Subaru car company (they used to have a link at the US site that described the star cluster and their logo, but they seem to have deleted it, so I swapped in the Australian link). In Japanese, Subaru means “unite,” and this word is also used by Japanese speakers to identify the cluster that we refer to as the Seven Sisters or the Pleiades. The logo on the front of their cars is a representation of the stars in this cluster.

If you look closely at the image above, you will notice a few things about this group of stars:

Here are some other examples of similar star clusters:

The Pleiades and the other clusters above are examples of a class of objects that astronomers refer to as open clusters or sometimes galactic clusters. There is another type of cluster that is not as familiar to most of us, because there are no objects of this type that are easily visible to the naked eye. The claim is that from the darkest site, with good eyes, you should be able to see one example, M13, with your naked eye – but this is challenging enough that these objects are not as commonly known as open clusters. This second type of star cluster is referred to as a globular cluster. Below is an example, M80. 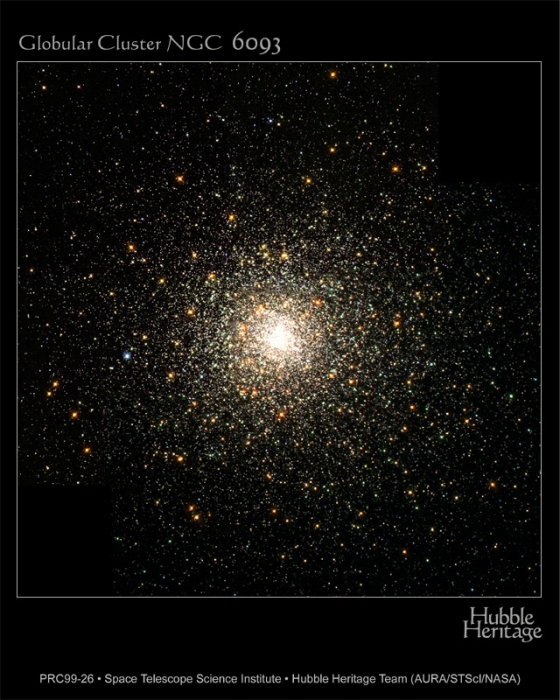 Here are links to some other examples:

These images of "globular clusters" should reveal several strong differences when compared to the images of "open clusters" presented above:

Open clusters and globular clusters are very different in many ways. In this lesson, we will study each of these classes of objects in some depth.

What are these M and NGC numbers you keep seeing?

You may be wondering why I refer to some star clusters as "M3" and the image above refers to the cluster as either "M80" or "NGC 6093." The answer is that most astronomical objects belong to catalogues and are referred to by their catalogue number rather than by a proper name like "The Milky Way." The M numbers refer to the Messier catalogue, which essentially includes the most famous objects visible to northern hemisphere backyard astronomers. These are objects that were catalogued by the French astronomer Charles Messier and his assistant in the 18th century. They were searching for comets (faint, fuzzy objects in the telescopes of that day that moved with respect to the stars), but would occasionally come across faint, fuzzy objects that did not move with respect to the stars. So you can think of the Messier catalogue as the roughly 100 objects that to a small telescope are faint, fuzzy, and not comets. Many astronomers think it is ironic that this comet hunter is known several centuries later for this catalogue, but that there is no well known "Messier's comet."

The NGC numbers refer to objects in the "New General Catalogue," which is a much larger catalogue of additional star clusters, nebulae, and galaxies that was published in the 19th century.

In the 21st century, many millions of objects have been cataloged by projects like 2MASS or the Sloan Digital Sky Survey. Since these catalogues are orders of magnitude larger than the Messier or NGC catalogues, objects are assigned names that include their right ascension and declination coordinates on the sky. So the star Vega can also be referred to as 2MASS J18365633+3847012.

‹ Overview up The Mass-Luminosity Relationship ›
ASTRO 801: Planets, Stars, Galaxies, and the Universe