The Hierarchy of Needs

For the purposes of this discussion, in the beginning, there was Abraham Maslow. Maslow was an American psychologist who, in 1943, would publish one of the most influential psychological journal articles of the last 100 years: "A Theory of Human Motivation." In this piece, he would lay out his case for the "Hierarchy of Needs," which is commonly referred to as "Maslow's Hierarchy" today.

Maslow's Hierarchy is elegant in its simplicity: It delineates universal human needs, beginning with the most fundamental physiological needs at the bottom, and progressing to the most abstract at the top: 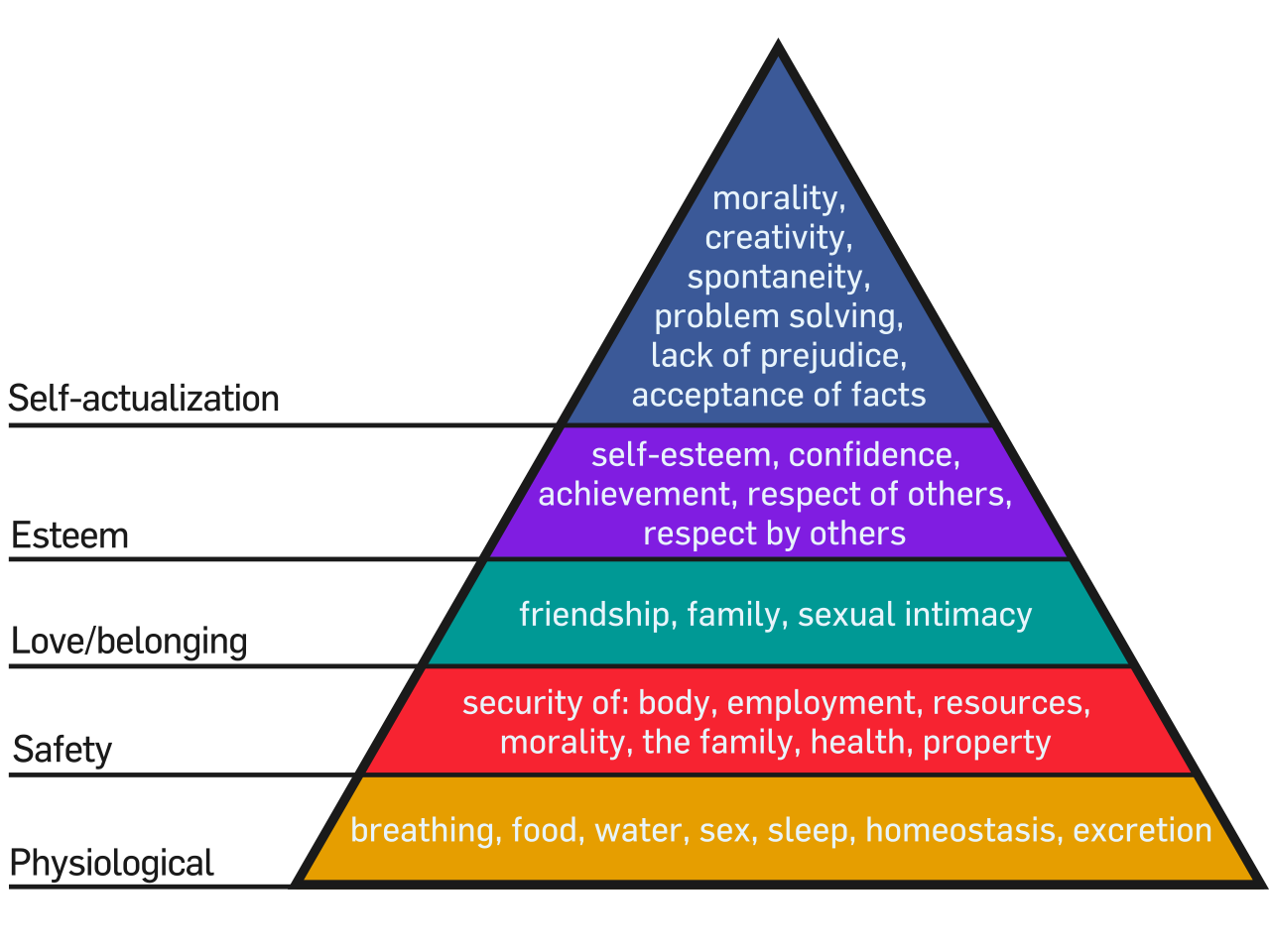 The hierarchy is used in many contexts today to explain any number of psychological phenomena, and it has been adapted for use in everything from management to motivation to marketing. Some of the applications of Maslow's Hierarchy may be a bit of a stretch from his original vision, but to provide some feel for the influence Maslow still holds on psychology and other fields, below is a graph of the use and citation of the more important psychologists in recent history. I have also included "Kardashian" for some frame of reference. (Bear in mind, thankfully, that this chart shows incidence of the terms in books and journal articles.)

Nonetheless, in the scope of meaningful reference and use, Maslow's work is in some fairly-rarified territory:

Click for text description.
Graph shows the relative use of terms between 1900 and 2000, including: Carl Jung, Jean Piaget, Abraham Maslow, B.F. Skinner, and Kardashian. Jung, Piaget, and Maslow appear the most frequently over time. Skinner is quite a bit lower, and Kardashian experienced a small blip in the 1990s.

Why do we care about Maslow's Hierarchy to kick off a Lesson centered on insight-driven innovation? Because in the First World, much of our lives are not spent on the literal act of daily subsistence, but on pursuits higher on the pyramid. So, while Maslow's hierarchy does an excellent job of explaining human needs, many of our efforts are centered around wants.

But, then, as we have addressed in the Clouds and Roots Model, and as we will address further in the Lesson, sustainability is very much about self-actualization for many people and organizations. What I refer to there is that the person or organization is extremely aspirational about sustainability, how sustainability refers to their own personal philosophies, and evaluating how we define and evaluate "success."

What we have is this combination of sustainability operating at the two farthest levels of the Hierarchy, which can make it very difficult to craft a coherent strategy for the innovation we are moving through research and development. This is not a trivial concern, as the strategy shapes the research, which refines the strategy, which drives the messaging.

It's a very interconnected web of the offering we are trying to understand and refine here, and far too often, messaging is considered an afterthought. The effort is centered on "what's in the box," which is then passed over to marketers and merchandisers later. We absolutely can not divorce or defer the strategy and messaging from our research, as quite literally, messaging shapes how customers experience the offering, and how they perceive the offering we are researching. Messaging has so much power that it can quite literally change how the brain processes signals from taste receptors, for example. (More on that later.)

So, how do we understand this "interconnected web" of the offering in order to refine strategy and messaging? By using a very specific and descriptive tool which we could consider a "relative" of Maslow's Hierarchy: The Means-Ends Chain.