Carbon dioxide can be chemically extracted from the atmosphere, and a couple of projects led by universities and private companies have developed systems to do this. These systems involve using natural winds or fans to pass air through filters that are coated with chemicals — either amines (organic molecules derived from ammonium), or a sodium hydroxide solution — that react with CO2, causing it to attach to the filter material. When the filters are full, they are closed off and subjected to either high humidity or temperatures of 100°C, which releases the CO2 — it is then drawn off and eventually concentrated into nearly pure CO2. Once the CO2 has been concentrated, there are several options:

The general scheme of a DACCS system is illustrated in the figure below. 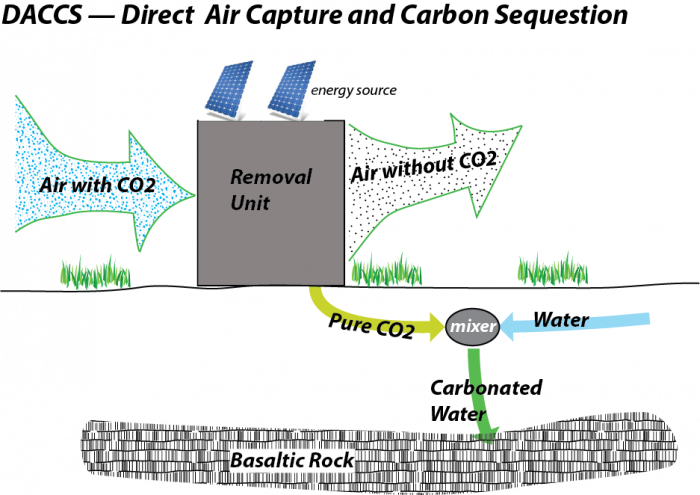 Some DACCS systems consist of relatively small (1 m cube) units with a fan on one side, and exhaust on the other, and filters inside that remove the CO2. The CO2 is then concentrated, mixed with water and injected into a geologic material below the surface where the carbonated water reacts with the rock to form carbonate minerals that lock up the carbon.
Credit: David Bice © Penn State is licensed under CC BY-NC-SA 4.0

These DACCS systems can be relatively small, and they can be deployed anywhere near a site where the CO2 can be injected into a suitable underground geologic storage site. Climeworks, a Swiss company, has already deployed several of these units; one is located in Iceland where they use waste heat from a geothermal power plant to provide energy to run the system and then inject the carbonated water into basaltic rock, which is an ideal geologic storage unit. A Canadian company, Carbon Engineering, has even gotten some of the major oil companies to invest heavily in this new technology, which is meant to be deployed in larger facilities.

At the moment, these systems are quite expensive. Climeworks is removing carbon for about \$600 per ton of CO2, and they are confident that they can quickly get down to \$200 per ton, and, if they greatly expand their manufacturing process, they might get it down below \$100 per ton. Carbon Engineering says that they will be able to do it for less than \$100 per ton. The lesson we take away from wind and solar energy is that the prices for these technologies are likely to continue to decrease as more units are produced. But, if we use \$100 per ton as a good near-term estimate, it would cost \$1 trillion to remove 10 Gt of CO2 (remember that our current global emissions are in the range of 37 Gt CO2 in 2018). This sounds like a lot of money, but it is only 1% of the global GDP and just a shade more than what we spend in the US on our military. Deploying this on a large scale also requires a lot of energy, but if that energy came from solar or wind power, there would still be a net removal of CO2 from the atmosphere.

One of the attractive features of DACCS technologies is that they could help solve the problem of ocean acidification at the same time as lowering the temperature (or preventing it from getting too high).

If we wanted to use DACCS to get to zero carbon emissions, we would have to remove as much as we emit from burning fossil fuels. Doing this would allow the carbon cycle to begin to return to normal; the temperature would decrease slightly, and ocean acidification would be reversed.