Water use and treatment

Once taken for human use, water generally follows a path described in Figure 3 below. After undergoing treatment and distribution, it is used. In the broadest sense, water is constantly being re-used. Water that is taken from rivers or streams for domestic, industrial, or agricultural use was most likely also used by communities or farms up-stream, and subsequently treated and discharged. Over even longer timescales, the water in streams, lakes, and groundwater is the same water that has ever been on Earth – and those same molecules have undoubtedly cycled through many plants and animals before we were even around!

Depending on the nature of water use, it may be re-captured after treatment (“recycled water”) for re-use. As we will see later in the semester, this re-use of water resources is one strategy to cope with water scarcity. The recycled water, depending on its quality, can be used for irrigation (i.e. for parks or golf courses), or for domestic supply. Once the water leaves the “use” loop, it is treated and discharged, typically into surface water bodies. In some cases, the treated water may be used to recharge aquifers instead, either through induced recharge systems or at a smaller scale via passive filtration through soils – for example in leachfields. The discharged water, after mixing with water in the river, stream (or aquifer), becomes a water source for downstream or down-gradient users. 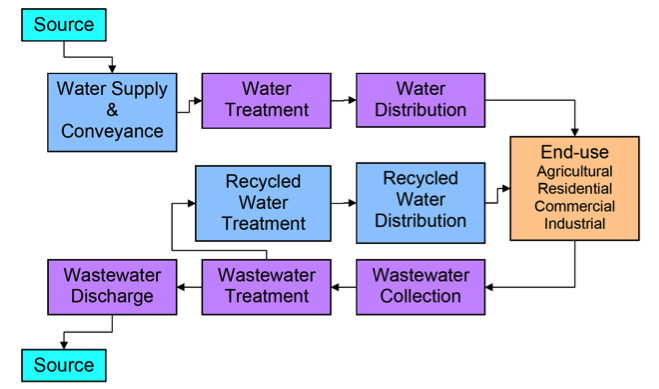 Figure 3. California’s Water Use Cycle
Click for a text description. This will expand to provide more information.
Water is first diverted, collected, or extracted from a source. It is then transported to water treatment facilities and distributed to end-users. What happens during end-use depends primarily on whether the water is for agricultural or urban use. Wastewater from urban uses is collected, treated, and discharged back to the environment, where it becomes a source for someone else. In general, wastewater from agricultural uses does not get treated (except for holding periods to degrade chemical contaminants) before being discharged directly back to the environment, either as runoff to natural waterways or into groundwater basins. There is a growing trend to recycle some portion of the wastewater stream – recycled water – and redistributing it for non-potable end uses like landscape irrigation or industrial process cooling.
Source: California Energy Commission

1. Do you know the source of domestic or municipal water in your hometown? If yes, what and where is it? If no, does it surprise you to realize that you don't know where your drinking water comes from?

Click for answer.
ANSWER: Of course, the answer will vary depending on where you live – but your water source should be either surface water (a river, lake, or man-made reservoir) or groundwater (if wells supply the water). In some cases, it may be a combination of the two. If you don't know where your water comes from, hopefully, this class will inspire you to find out.

2. Do you suppose that any of that water is used and then treated by others before being taken for your use?

Click for answer.
ANSWER: Although it may be unpalatable to hear, it’s almost certainly the case. Most surface water supply taken from rivers or lakes will include a proportion of water that was discharged by upstream communities.

3. Take a look at figure 3 above. Had you thought about your water as a substance that has a “life cycle” and is constantly being used, treated, released, and re-used? If not, does the idea make you uncomfortable?

Click for answer.
ANSWER:
‹ The Value of Water up Water and Population Centers ›
Earth 111: Water: Science and Society