The distribution of water-rich and water-poor regions is of course not the whole story – access to clean water isn’t just about the amount of water that falls as precipitation. It’s also about the infrastructure needed to obtain, treat, transport, and deliver potable water. And that’s just the water supply. Disposal and sanitation of dirty water are equally important and require a means of transporting waste away from the distributed sources, collecting it and treating it, and discharging it safely. Ideally, both supply and waste conveyance systems should also be monitored for performance and for their impacts on water quality.

In some areas, water is plentiful, but access to clean water is not (Figures 7-8). The converse is also true, mainly in developed nations where water projects, desalination, or dams provide a water supply to regions that receive little precipitation. There is also a clear distinction between access to clean water in rural and urban areas (Figure 7), wherein access in rural areas, even in developed nations, lags behind that in urban areas. 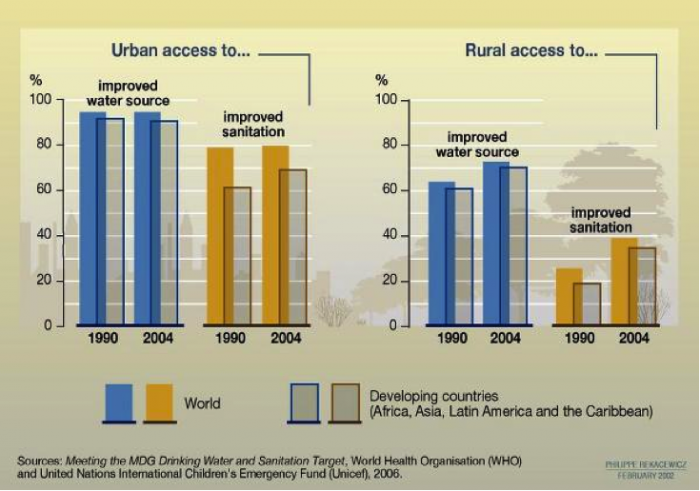 Figure 7: Access to clean water supply and sanitation in urban and rural areas. Note that rural areas lag behind urban ones in access to clean water and sanitary disposal, and developing nations lag behind developed ones.
Click the link to expand for a text description of Figure 7.8
Source: United Nations Environment Programme Vital Water Graphics

1. What is the primary trend shown in Figure 7 above, with respect to urban vs. rural areas?

2. Is there a major difference in access to clean water supply and sanitation when comparing developed and developing nations?

Click for answer.
ANSWER: There is. In general, access is better in developed nations (solid colored bars) than developing nations (outlined bars).

3. Which is the bigger difference – urban vs. rural, or developed vs. developing nations?

Click for answer.
ANSWER: The discrepancy between rural and urban areas is larger than that between developed and developing nations.

4. Do you find your answer to question #3 surprising – or is it what you had expected?

Click for answer.
ANSWER: Your answer may vary. The instructors did find this surprising – our preconceived notion was that the major difference would be between developed and developing countries, and that access to water and sanitation in developed nations would be better than shown.

Access to clean water differs between rural and urban areas, and between developed and developing nations. In general, in rural areas, even in developed nations, access to water and sanitation lags behind that in urban areas. Globally, the areas with the poorest access to clean drinking water are in equatorial and sub-Saharan Africa, and parts of South America and southeast Asia (Figure 8).

One might imagine that access to clean water and sanitation would be strongly correlated with water-related illnesses and death. For example, compare the maps in Figures 8 and 9. 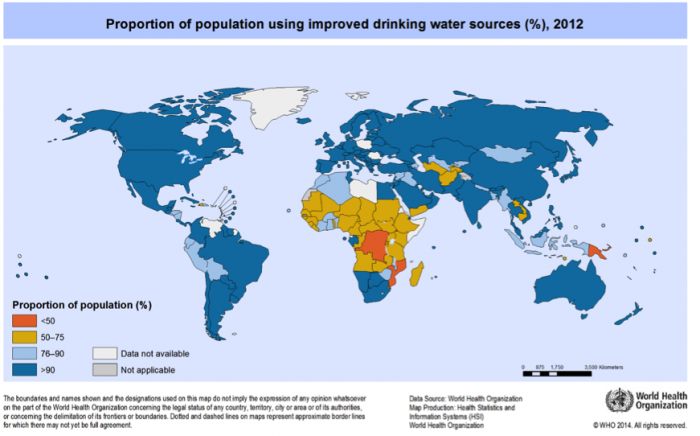 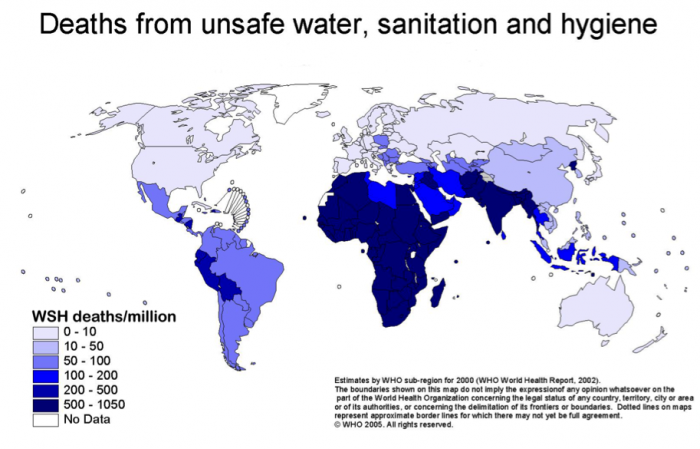 Click for answer.
ANSWER: There are many areas where poor access to improved water sources coincides with high rates of death and disease from water-related illnesses. The most prominent are equatorial nations in Africa, parts of the Middle East, and to a lesser extent Indonesia and S. America (Ecuador, Peru). Likewise, there are numerous examples of regions with near-universal access to improved water (>90%) and the lowest rates of death and disease – notably North America, Australia, and much of Europe.

Click for answer.
ANSWER: Although not a clear cut story everywhere, in some areas the problem seems unlikely to be water scarcity – for example in central Africa, where rainfall is plentiful, there are still high rates of death and disease. This suggests that the root of the problem is not scarcity. In other areas, like the Middle East (e.g. Egypt, Saudi Arabia), there is access to improved water, but the prevalence of disease – suggesting a possible link to water scarcity.
‹ Water and Population Centers up Water Usage: What and Where? ›
Earth 111: Water: Science and Society