Porosity (usually denoted by the symbol η, which is Greek letter 'eta') is the primary aquifer property that controls water storage, and is defined as the volume of void space (i.e., that can hold water in the zone of saturation) as a proportion of the total volume (Figure 10). 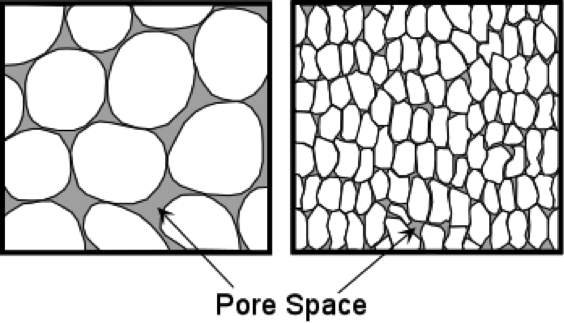 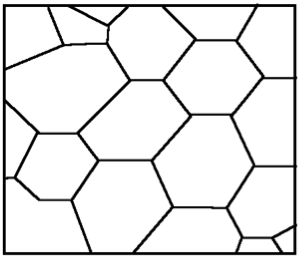 Figure 10. Schematic diagrams illustrating porosity in sedimentary rock with two different particle, or grain sizes (left), and in a crystalline rock (right). In the latter example, the porosity is restricted to the boundaries between “grains” that remains after they crystallized or grew, and is usually <2-5%.
Source: Earthsci.org (Creative Commons Attribution-NonCommercial-ShareAlike 3.0 Unported License), after lecture notes from S.A. Nelson.

Porosity is expressed as either a fraction, or a percentage:

, or if reported as a percentage,


For aquifers composed of sedimentary rocks or sediments, porosity is usually in the range of ~10-35%. For unfractured crystalline rock, porosity is quite a bit lower - on order of a few percent - because there is little porosity between individual grains other than the vary narrow interfaces along their boundaries (Figure 10).

Several factors can affect porosity. In sedimentary rock and sediments, controls on porosity include sorting, cementation, overburden stress (related to burial depth), and grain shape. Poorly sorted sedimentary deposits, in which there is a wide distribution of grain sizes, typically have lower porosity than well-sorted ones (Figure 11). This is because the finer particles are able to fill in spaces between the larger grains. Cementation caused by precipitation of minerals (typically calcium carbonate or silica) at grain boundaries also reduces porosity (Figure 11). Angular grains generally allow more efficient packing of particles than rounded or spherical ones, also leading to slightly lower porosity. Finally, the more deeply sediments or sedimentary rock are buried, the larger the weight of the overburden; the higher stress leads to compaction, tighter packing of the grains, and lower overall porosity.

Secondary processes that act on the rock or sediment after its formation, primarily weathering by physical or chemical mechanisms, can also affect porosity. Physical weathering by wind or water movement can remove fine clay-sized particles from the sediment (a process termed winnowing), leading to increased porosity near the Earth’s surface. Chemical weathering of certain rock types can lead to clay and oxide formation; depending on the environment and initial composition of the aquifer grains, the clays and oxides may subsequently be removed (porosity increase), or they may grow at the boundaries of other particles and reduce the porosity.

In fractured rock (whether fractured crystalline or cemented sedimentary rock), porosity is typically ~2-5%. The pore space is almost entirely composed of the fractures or cracks themselves, which are typically a millimeter or less in aperture (Figure 12). Two primary factors control porosity – and the connectedness of porosity – in fractured rock. First, increased stress, related to the depth of burial and the weight of the overburden, exerts a clamping force that causes the closure of cracks or fractures (decreases fracture aperture). In some types of rock – most notably limestones – chemical weathering occurs via dissolution as water flows along and through fractures. This leads to increased fracture aperture. Significant enlargement of fractures can lead to the development of karst, typified by large open fractures, caves, and caverns, as well as sinkholes and hummocky topography that ensue as the underlying rock is gradually dissolved (Figure 13).

Interestingly, grain size does not affect porosity. For example, consider a box filled with spherical particles packed as tightly as possible. The proportion of empty space (porosity) would be the same whether the particles are marble-sized, pea-sized, or golf ball-sized; the porosity is controlled entirely by the geometry of the particles – not their dimensions. As we’ll see in the next section, however, grain size does strongly affect the ability of aquifers to transmit water because it directly controls the size of the pore spaces where the water percolates. For example, unconsolidated clays (grain sizes of a few to tens of microns) commonly have porosities of over 50-60%, but they transmit water only one-thousandth to one millionth as well as sands with porosities of 20-30% (grain sizes of a few hundred microns).

Specific Yield (denoted as Sy) is another important quantity for water storage in unconfined aquifers. Sy is defined as the proportion of water occupying void spaces that drains under gravity. Because some water is bound, or adsorbed, to the aquifer particles or fractures, the specific yield is always lower than the porosity (take a look at Figure 8, inset at top left). The attraction between water molecules and the aquifer is due – you guessed it! – to the polar nature of water and surface tension. In sands and fractured rock, Sy is typically a large fraction (>90%) of the porosity, whereas in fine-grained sedimentary deposits Sy may be as low as a few percent because the surface area interacting with water molecules is higher, and pores are smaller, allowing the aquifer to retain more water. In unconfined aquifers, Sy controls the amount of water that can be extracted by pumping.

In confined aquifers, the compressibility of the aquifer is the dominant control on water storage and release. As described above (see Figure 8, right panel), when water is extracted from confined aquifers by pumping or flow to natural springs, the aquifer remains saturated, but the water pressure decreases. Upon depressurization, the aquifer itself can compress slightly. If water is recharged or injected, the opposite occurs: pressure increases and the aquifer expands very slightly. Essentially, by increasing water pressure, more water mass is being “crammed” into the pore space in the aquifer, and vice versa. Although exaggerated, one way to visualize this is to think of pores in the rock or aquifer as a juice box. By changing the pressure inside the box, it will expand or contract. In the same way that a soft juice box will deform more than a stiff one for a given change in pressure, a more compressible aquifer will yield more water than a stiffer aquifer, for the same depressurization. The storage of water in confined aquifers is termed the specific storage, and reported in units of Volume of water/Volume of aquifer per change in water level (so the units are 1/length; e.g., 1/m or 1/ft). 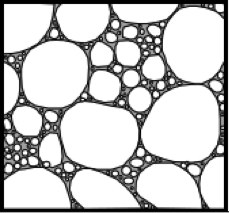 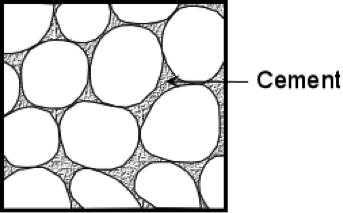 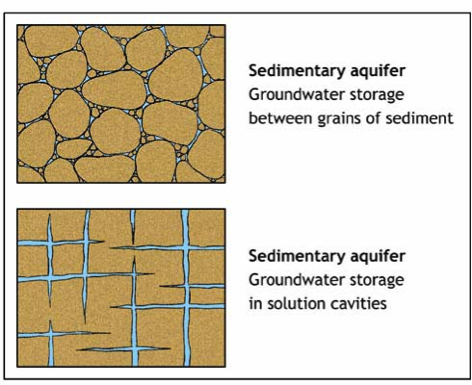 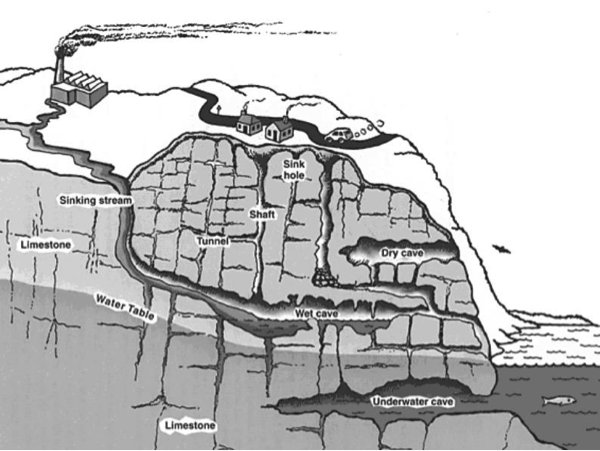