How are Tsunamis Generated?

The Earth's lithosphere is broken up into a bunch of discrete pieces, called plates, that move around the surface of the planet. This motion is driven by the flow of the mantle rock beneath the plates and by the forces plates exert at their boundaries where they touch each other. There are three distinct types of plate boundaries, shown illustrated by the drawing below both as separate block diagrams as well as situated within their appropriate geologic environment. 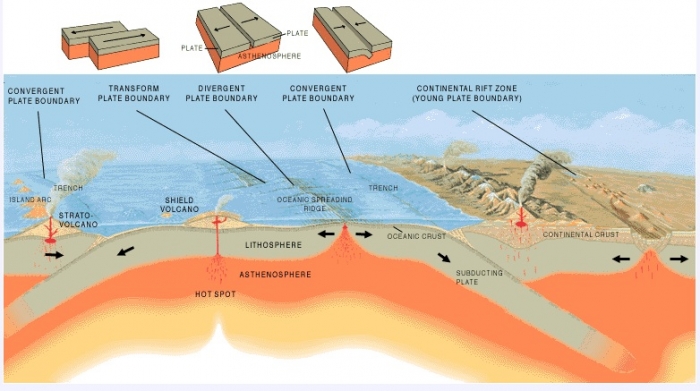 Earthquakes happen when plates move with respect to each other because the friction and stress at the edges of plates prevent them from slipping smoothly at their boundaries. For an earthquake to generate a tsunami you need:

If an earthquake happens far away from a body of water, it probably won't disturb the water too much. Therefore, no tsunami is expected. Next, you need a vertical disturbance. Picture this: You have a bathtub full of water and a hard-backed book. If you dip the book into the bathwater spine-first and move the book back and forth longways, what do you observe? Not much, except you've ruined your book. Now if you hold the book with its flat side on the surface of the water and move the book up and down in the water, you should generate some big waves as the vertical motion you've imposed on the water column is transferred to horizontal motion as the wave travels away from the source. This is basically how a tsunami is generated.

If "The Big One" happens on the San Andreas Fault, do we expect a large tsunami? Do we expect California to "fall into the ocean" as in the cartoon I drew? Think about why or why not based on the material you just read

Volcanic eruptions can also produce tsunamis. The rules are similar to the rules for earthquakes. In order for a volcano to produce a tsunami you need:

1. A volcano near the coast

2. An eruption that sends a large enough volume of material into the water to displace a significant volume of water.

If a large eruption sends a great volume of material into the water, it creates the vertical disturbance necessary to make a tsunami. This is one of the reasons the Cumbre Vieja volcano is worrisome: either an eruption or a landslide from a flank collapse could produce a tsunami.

Want to learn more about volcanoes and tsunamis? One of the earliest modern records of a devastating tsunami comes from the eruption of Krakatoa in August 1883. Read about that tsunami on the BBC News site - Krakatoa: The first modern tsunami.

‹ Risk for an Atlantic Tsunami? up Where are Tsunamigenic Danger Zones Located? ›
EARTH 501: Controversies in the Earth Sciences