For example, the rise time for an earthquake is often negligible compared to the rupture duration, but for a slow slip event, the rise time can be a significant fraction of the overall time of rupture.

The rise time is how long it takes an earthquake to go from zero to its seismic rupture velocity. Generally speaking, earthquake rise times are fast compared to how long the earthquake lasts. Another interesting thing about earthquake rise times is that they are about the same regardless of the final size of the earthquake. The rise time of a magnitude 5 and a magnitude 8 are about the same. The difference is that a magnitude 8 lasts longer and a bigger chunk of ground is involved in the earthquake. For a slow slip event, the rise times are incredibly long and the event never does get up to a seismic speed at all. Since the motion is all so smooth and slow, seismic waves aren't generated. That's why we have to use GPS instead of seismometers to measure slow slip events. See my screencast for a sketch explaining rise time. Click here for a close-captioned version of the rise-time sketch.

Where have slow slip events been found? 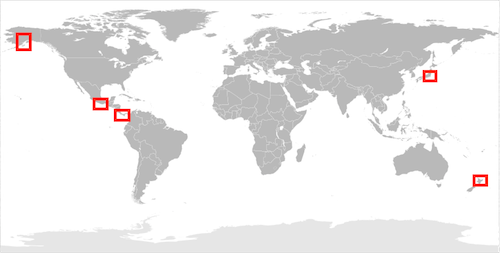 This figure shows some known slow slip locations at subduction zones (as of fall 2013). In a couple of places (San Andreas Fault, Hawaii) slow slip events have been observed at a non-subduction zone setting. For our purposes, we will stick to the subduction zones.
E. Richardson

The figures below are reproduced from published papers that describe slow slip events detected in New Zealand, Nicaragua, Mexico, and Alaska. Their locations in the grand scheme of the world are shown with rectangles on the world map above, except Japan is missing from the detailed maps below. All the slow slip events shown here have two main things in common: 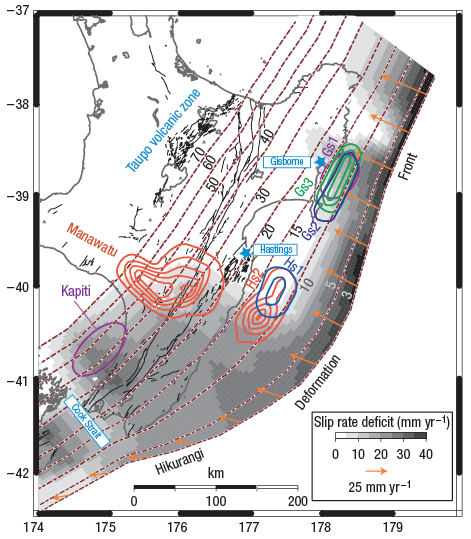 New Zealand. Each colored bulls-eye depicts a different slow slip event. The dotted line contours show depth of the subducting plate. The arrows show the direction of motion of the lower plate. There are several SSEs here; their durations are 10-20 days, and their slips are on the order of 10s of mm.
Credit: McCaffrey et al., 2008 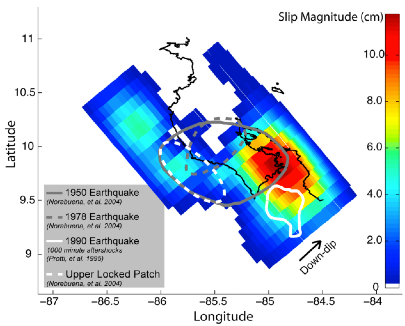 The Nicoya Peninsula of Nicaragua. The grey, grey-dashed, and white, and circles show the rupture areas of ordinary fast earthquakes that have happened here in the past. The colors indicate how much slip was detected during the SSE. One SSE was detected here, and it lasted for weeks, and it slipped on the order of 10 cm in the area in red.
Credit: Outerbridge et al., 2010 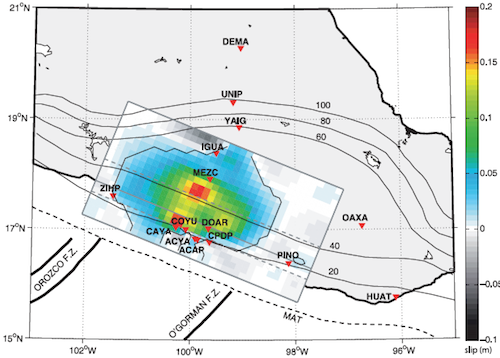 Guerrero, Mexico. The dashed line shows the Mid-America Trench. The contour lines show the position of the lower plate marked as depth below the surface of the Earth. The red down-pointing triangles are GPS stations. The box with the colors in it shows where the SSE happened. This one took months and slipped up to 20 cm in the middle near station MEZC.
Credit: Radiguet et al., 2011 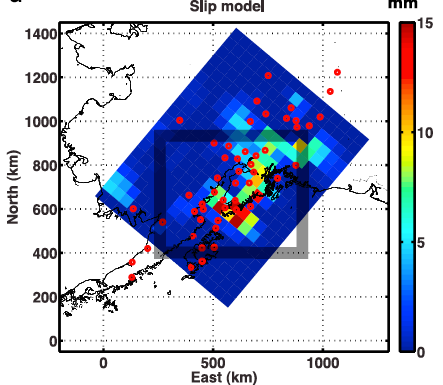 South-central Alaska. The red circles are GPS stations, and the colored squares show where the SSE happened. There was one SSE detected here. It lasted months, and slipped up to 15 mm in some places.
Credit: Wei et al., 2012
‹ The Secret Lives of Subduction Zones up Spectrum of Fault Slip problem set ›
EARTH 520: Plate Tectonics and People