Let's do something with Plate Tectonics and ask how fast plates move relative to one another? The answer can be found by using plate rotation vectors. Stick with me for a minute or two. This looks more complicated at first blush than it really is. For our purposes, we just need the ability to plug numbers into an equation --so we need to follow the parameter definitions and the equation.

The motion of a point on one tectonic plate relative to another plate can be described by the relative velocity vector v. The velocity v has magnitude and direction and is given by the cross product of the angular velocity vector ω and the plate rotation vector r . The equation looks like this, where the "x" means cross-product. The reason we can't just use distance=rate*time is because we are describing the motion on the surface of a sphere as opposed to making the assumption that it's all flat and distances are simply linear.

For example, according to one of the accepted models for plate motion (NUVEL 1), the velocity of the North American Plate relative to the Pacific Plate is given by the rotation pole at: 48.7° N 78.2° W and angular velocity 7.8x10-7 degrees/year (that is: 0.00000078 deg/year.) Therefore, a point on the Pacific plate near Parkfield California, which is at 35.9° N 120.5° W, is moving at 47.6 mm/yr relative to the rest of North America. How long will it take for this point to reach the present location of San Francisco?

How does this calculation work? Download this pdf file for the details. That file contains some useful background. The last page is the example above.

NOTE: Parkfield CA is the site of a National Science Foundation project called EarthScope that has drilled into the San Andreas Fault. See SAFOD Observatory for more details on the drilling project.

One of the first sketches to show tectonic plates

Note the three types of plate boundaries (compare to the figure on the previous page) and the definitions of lithosphere, asthenosphere, and mesosphere. Lithosphere means the rigid part and thus the bottom of it is defined by an isotherm (do you know why?). The base of the lithosphere is typically taken as 1300° C. Note that the plate thickens as it moves away from a divergent spreading center. Mid-ocean ridge systems are hot (they are volcanoes!) and thus ridges are relatively buoyant, which means that they have relatively higher elevation than regions around them. Ocean depth increases systematically with distance away from mid-ocean ridge systems. We'll look at this more closely in Activity 3.

Note in the sketch below that the Earth and its plates are portrayed as a block instead of a sphere. If you think spherical geometry is difficult to work with, you are right. It's hard to visualize in your head and not so easy to sketch, either.

You can always use vector algebra to calculate linear velocity v from the position vector r and the angular velocity vector ω, but there's an easier way to get the magnitude of the velocity by using the solid angle between the pole of rotation and the location of interest (see below). The solid angle can be obtained using spherical trigonometry:

Click for text description of the plate motion vectors table.

The standard notation for plate vectors () is that/ the first plate listed moves counterclockwise with respect to the second plate.

Some background on Spherical Trigonometry

To work with plate motion vectors, and to calculate the linear velocity of points on Earth's surface, we need to know the distances between various points on the globe. A useful analogy is that of linear and angular velocities associated with Earth's daily rotation. That is, the angular velocity is the same everywhere on Earth. All points rotate through 360° (2 pi radians) in 24 hours. But the linear velocity, on Earth's surface, depends on where you are relative to the rotation axis. If you're at the North Pole, then you cover only a small distance, whereas if you're at the equator, then you cover a distance equal to Earth's full circumference in 24 hours (2 pi R). As Earth rotates each day, the linear velocity of points at the Equator is much larger than points near the poles. The same type of thing happens with plate motions. Points that are close to the pole of rotation move with lower linear velocity than points that are farther from the pole. So, we need to calculate the distance between each point and the pole. These next two figures will help show how this works. Remember, for our purposes, we just need to be able to plug numbers into an equation, so we need to follow the parameter definitions and the equation. 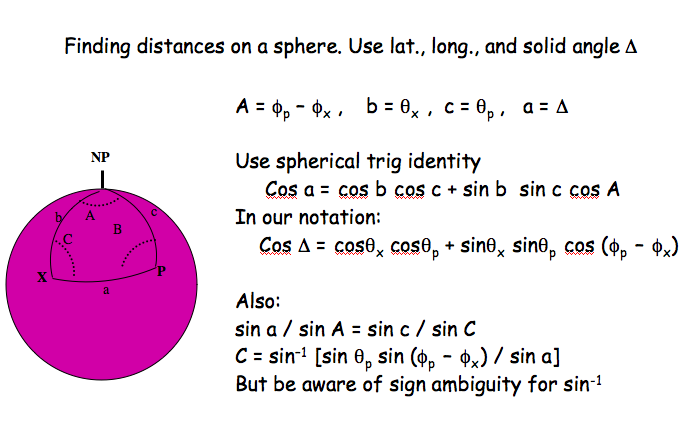 Click for text description of the spherical trigonometry image.

Finding Distances on a sphere. Use lat., long., and solid angle

In the diagram above, upper case letters refer to surface angles and lower case letters refer to solid angles, measured between lines that extend from the Earth's center to the surface. For a point X at, say, latitude 20° N, the angle b is 70°, because b is measured from the north pole along a line of longitude. In the calculation, it's standard to use the 'co-latitude' b and c. Note that it's easy to get b and c, based on their latitudes. But the same is not true for the solid angle a. That's why we need spherical trig. Surface angles are perhaps more familiar. They are obtained from latitude and are therefore nothing more than a larger-scale version of the angle between the first-base line and the third-base line on a baseball diamond.

Here's an example that will help to fix ideas. Do you follow? If not, please post a question on Canvas. 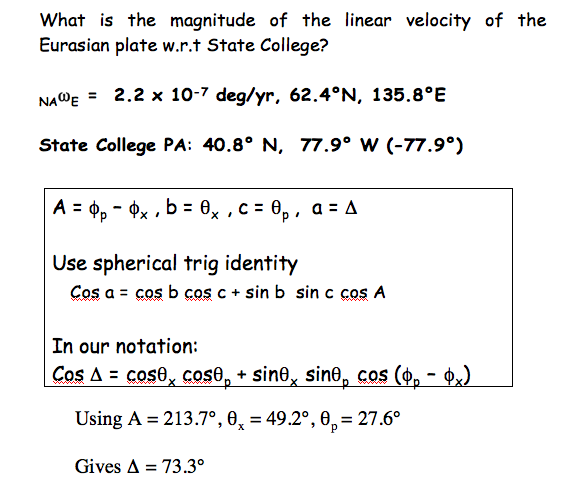 Click for text description of the spherical trigonometry example image.

What is the magnitude of the linear velocity of the Eurasian plate w.r.t State College?

Check: Can you verify 73.3 deg. for this example? If not, make sure you're using co-latitude and that your answer is in degrees. Still having trouble? Then have a look at this.

Once you have the angular distance between the points (Δ), you can get the linear velocity using v = ω R sin Δ. See the last page of this pdf file for a worked example.

NOTE: For this assignment, you will need to record your work on a word processing document. Your work is best submitted in Word (.doc), or PDF (.pdf) format so I can open it.

Upload your paper to the "Lesson 2 - Activity 1" dropbox in Canvas by the due date indicated on our Course Schedule.

‹ Overview up Activity 2; Motion Under the Ocean, Hot Spots ›
EARTH 540: Essentials of Oceanography