Water as the Universal Solvent

As indicated in previous sections, the polar water molecule allows water molecules to form bonds with one another. These bonds are referred to as hydrogen bonds. If we consider sodium chloride (salt), a compound containing ionic bonds, we could demonstrate that simply by placing table salt in water, for example, we can reduce the electrostatic attraction between the sodium and chloride ions by 80 times. As more and more ions of sodium and chlorine are freed by the weakening of the electrostatic attraction that is holding them together, they become surrounded by the polar molecules of water--what is termed "hydration." 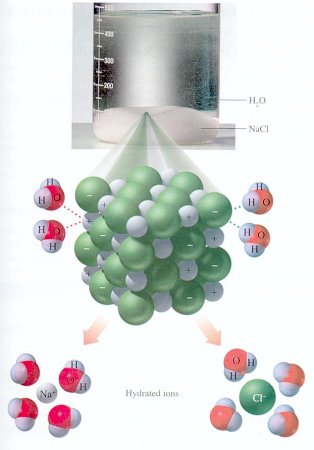 Water dissolves more substances than any other common liquid by breaking "salts" into component "ions" (e.g. NaCl into Na+ and Cl-) and hydrating those ions to keep them from interacting. Thus, polar water molecules have an attraction for ions (atoms or groups of atoms with a charge), where "cations" are ions with positive charge and "anions" have negative charge. Most elements have high solubilities in water, which means that large concentrations of those elements can build up before the capacity for water molecules to isolate the ions is exceeded. The point at which Na and Cl, for example, would begin to precipitate a salt in seawater is termed "saturation." For NaCl (the mineral "halite") this only occurs from present-day seawater when evaporation occurs and the volume of seawater is reduced to about 10% of its original volume.

Seawater is essentially an NaCl solution which averages a concentration of 35 g NaCl/kg water (or 3.5% salt). Na and Cl compose over 85% of the total dissolved solids (salt), but there are other important ions present. The relative abundance of ions in seawater ranks in order: Cl, Na, SO4, Mg, Ca, K. Together, these ions make up >99% of the dissolved solids in seawater. With only four other elements--HCO3 (bicarbonate), Br, Sr, B, F--we have 99.99% of all dissolved solids. Charges must balance, so the positive charge associated with Na+, Mg+2, Ca+2, K+ equals the negative charge associated with Cl-, SO4-2 (and HCO3-). We don't think you would want it any other way. Think about what the flow of the current would be from the sea to you, sitting on the beach, if the charges were not balanced--shocking!

Salinity varies over a range of about 32 to 37 o/oo in the open ocean as Figure 2 (below) illustrates. Note that areas of highest salinity occur in regions of highest net evaporation, as one might expect.

All other dissolved substances in seawater are at very low concentrations (part per million or billion) (ppm or ppb; 10-6 to 10-9). This Includes important nutrients such as phosphate and nitrate that are cycled by organisms (elements called "bio-limiting") and essential for life. Many metals have trace concentrations (wanna' get rich? There are about 9 million tons of gold dissolved in seawater, which is about equal to all the gold mined on earth throughout history).

‹ Latent Heat & Heat Capacity up Why the Sea is Bitter ›
EARTH 540: Essentials of Oceanography