For large scale winds and ocean currents, the Coriolis effect is an important consideration because it changes the net direction of heat transport.

Coriolis Effect The Coriolis effect is due to an inertial force that is important in a rotating frame of reference. As you know from Newton's laws of motion, bodies in motion stay in motion unless acted upon by external forces. So, a wind blowing from north to south should go in a straight line, and in fact, it does. The problem is that this straight line does not look straight when referenced to a spinning Earth. There are many on-line resources for the Coriolis effect, so I won't try to duplicate visualizations here, but there are a few things to get straight before looking at a few of them.

Thus, the magnitude of ac = ω v sinΔ where bold indicates magnitude and Δ is the solid angle between the vectors. For a three-dimensional body, this angle is a solid angle, and we can use the formulas developed from plate tectonics and spherical trigonometry to determine the solid angle. But fortunately, we don't need to use these, because the rotation axis corresponds to Earth's north pole, thus, we can just use the latitude.

If you want more background and examples, I can recommend the Wikipedia page which is very well done.

I can also recommend: Coriolis explained

The right panel is a wonderful image of the wind pattern around a Low Pressure system over Iceland. Note the counterclockwise nature of the coiling pattern of the clouds. Does this look familiar from images that you've seen for hurricanes?

Read the link below.

Ekman Transport Water in the ocean can be divided roughly into three regions based on density: surface water, the pycnocline, and deep water. The pycnocline (also called the thermocline or halocline: recall that seawater density (pycno) is determined by temperature (thermo) and salinity (halo). Winds drive surface currents in the ocean, and these currents are effected by the Coriolis effect. But surface flow causes motion in the water below, so things get a bit more complicated. The physical properties of Surface Waters vary smoothly from the ocean surface to the pycnocline, but for the purposes of this discussion, it's useful to imagine that the surface zone is composed of several layers of water. The top-most layer is driven by wind. Motion in this layer drives flow in the layer below, and so on, such that wind driven motion at the top, ultimately, drives flow in all of the layers below. Now here's the complication: each one of our 'layers' is influenced by the Coriolis effect. This sets up a spiral, with motion in each successively deeper layer bent somewhat to the right (in the Northern Hemisphere) relative to the forcing from above. 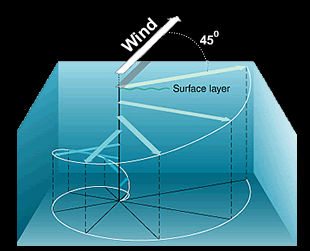