Read the link below.

Recall from Lesson 3 that water density increases with increasing salinity and decreasing temperature. Water density varies throughout the ocean and the water at the bottom of the ocean is densest, of course. Ocean-atmosphere interactions have important implications for global ocean currents. For example, think about what would happen if a large scale surface current continually lost heat. The colder it got the denser the water would be, and eventually that water would become dense enough to sink, and become deep water. Now lets add in evaporation. Imagine that water was continually evaporated from our surface current. This would make it saltier, which would increase the density. Eventually, the density would increase enough for the water to sink and become deep water. 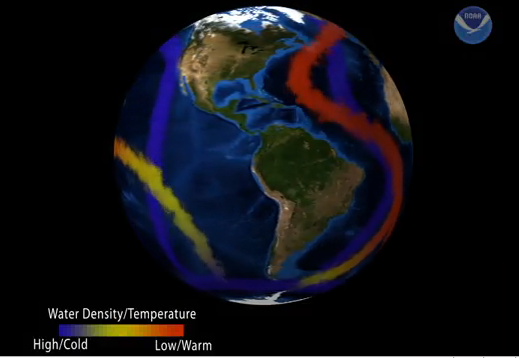 This is exactly what happens in the North Atlantic. But, if deep water forms in one place, then surface water has to form somewhere else; we can't push water into the deep ocean without something coming back to the surface, and in fact, surface water forms in various places in the ocean.

It's important to appreciate that any Figure drawn at this scale, the entire ocean, is approximate. Don't take everything you see in these figures as the gospel. For a different perspective, have a look at this animation.

The figure below shows the general structure of water masses as a function of depth in the ocean. 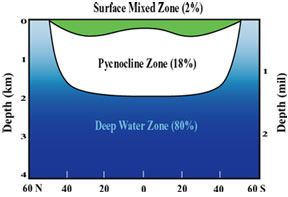 Why does surface water sink in the North Atlantic? Let's calculate the density differences between surface waters in the tropics vs. where deep water forms in the north.

Go to the Windows to the Universe is web site and read the information there (under: Density of Ocean Water)

Then click on the links in the second paragraph for ("the temperature of the water and the salinity of the water....")

For temperature, you'll need to click on the link for "Sea Surface Temperature Image," which is under the heading "Related Links." If you have trouble finding it, click here

For salinity, you can just click on "the salinity of the water" and then on the map at the top of the page.

The colors are a bit tricky to distinguish, but do your best and report the values you chose.

Please put your answers in a file and drop that in the dropbox for Lesson 4, Activity 2 on Canvas.

Save your document as either a Microsoft Word or PDF file in the following format:
L4_Activity2_AccessAccountID_LastName.doc (or .pages or .pdf)
For example, student Elvis Aaron Presley's file would be named "L4_Activity2_eap1_presley.doc".

‹ Coriolis and Ekman Transport up Gyres and Surface Currents ›
EARTH 540: Essentials of Oceanography