The Global Thermostat. The Ocean-Atmosphere-Climate Connection 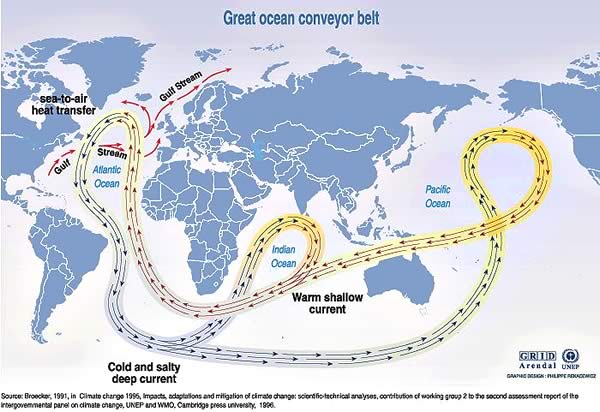 In this lesson, we have the ambitious task of tackling the heat distribution on Earth and it's role in dictating ocean circulation, atmospheric circulation, and Earth's climate.

By the end of this lesson you should have a deeper understanding of the role of the oceans and atmosphere in heat transfer on Earth, the structure of the oceans including surface water and deep water, thermo-haline circulation including patterns and the factors that drive flow, the Coriolis effect and Ekman transport, large-scale atmospheric circulation, oceanic gyres, and boundary currents in the ocean basins.

This figure incorporates many of the topics we will cover in Lesson 4. Note the Gulf stream in the North Atlantic and the sea-to-air heat transfer associated with it. Also note the three dimensional nature of ocean current flow (the conveyor), which includes warm surface currents and deep currents.

What will we learn in Lesson 4?

By the end of Lesson 4, you should be able to:

What is due for Lesson 4?

The chart below provides an overview of the requirements for Lesson 4. For assignment details, refer to the lesson page noted. See the Course Schedule (located in the Resources menu) for assignment due dates.

Post them to our Questions? discussion forum on Canvas or get in touch by email.