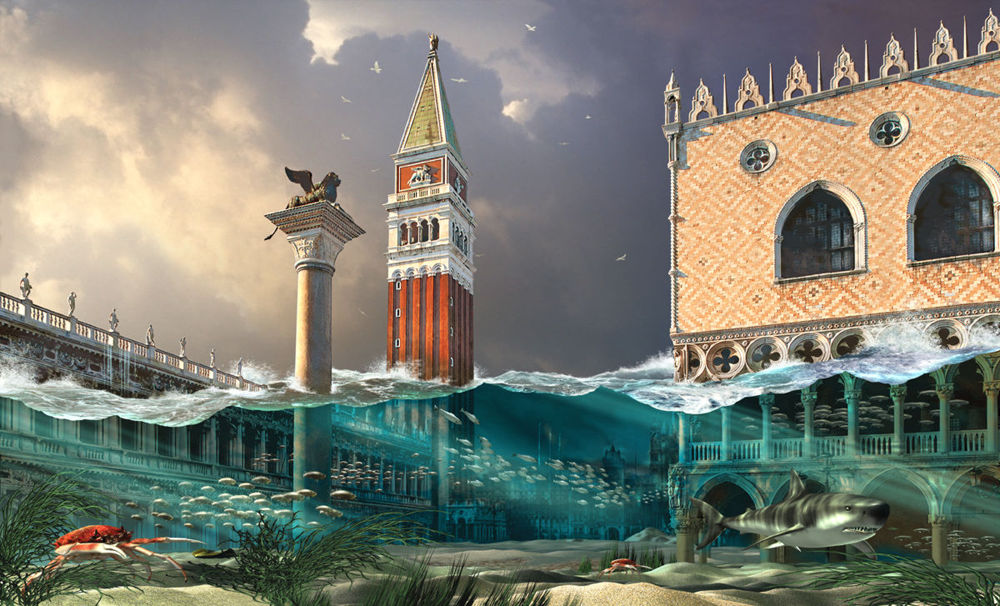 Yes, here is an essential question. Perhaps today's economy is not encouraging, so none of you are rushing out to purchase that beachfront house for the summer. But, let's assume that you have a cool million (or two) dollars languishing in your accounts--perhaps Bernard Madoff has just provided you a return on your investment! Would you go to your favorite coastal area, engage a real estate agent, and put in a bid for one of the many properties now available? Remember, buying when the market is down can make for good investments. Or would it in this case? The question is "what would you look for in a coastal property?"

Rather than answering that directly, let's embark on a consideration of the controversial topics of global climate change and resulting sea level change. Perhaps, after a reasonably intensive study of controls on sea level and predictions for the future, you will get cold feet on the coastal property purchase. Let's hope that it's not because you are standing inches deep in cold seawater in your living room! This fanciful artist's conception of Venice after a meter of sea level rise is not so far from reality. Engineers are, as we speak, planning an elaborate system of gates to prevent flooding of Venice while still allowing seawater to cycle through the adjacent wetland estuaries.

Click on the links below.
The Great Ice Meltdown and Rising Seas:  Lessons for Tomorrow By Vivien Gornitz — June 2012

Why is an understanding of future sea level so critical? It's the economy, it lives in the balance...! Think about the implications of meters of sea level rise in a short period of time. According to modeling studies, a category three hurricane (not the most severe by any means), given a certain critical storm track to the west of Manhattan, could create a storm-surge (more on this in a later lesson) of up to 6 meters at JFK Airport, 7 meters at the Lincoln Tunnel entrance, 8 meters at the Battery, and 5 meters at La Guardia Airport. The numbers could be larger if the storm passage coincides with high tide and if one considers the height of waves riding on the surge. What if sea level were, on average, a meter or two higher? Catastrophic flooding, loss of property, life and enormous cleanup costs. Certainly, hurricanes have affected New York City in the past. One made landfall at Jamaica Bay on Sept. 3, 1821 with a 13-foot storm surge, causing widespread flooding in lower Manhattan. The "Great Hurricane of 1938," a category three storm, tracked across central Long Island and southern New England on Sept. 21, 1938. The storm pushed a 25-35 foot high wall of water ahead of it, sweeping away protective barrier dunes and buildings. Some 700 people lost their lives during this storm. Things could be worse with any rise in sea level. The image below projects flooding associated with a Category 3 hurricane, as described above, with projections for additional flooding anticipated with given rises in sea level through 2050. Looks as though these "experts" might expect as much as 47 cm rise in the next 40 years. Hmmm, that's just over 1 mm per year. What is the present rate of rise? Is it expected to slow? On to the next phase of this lesson. 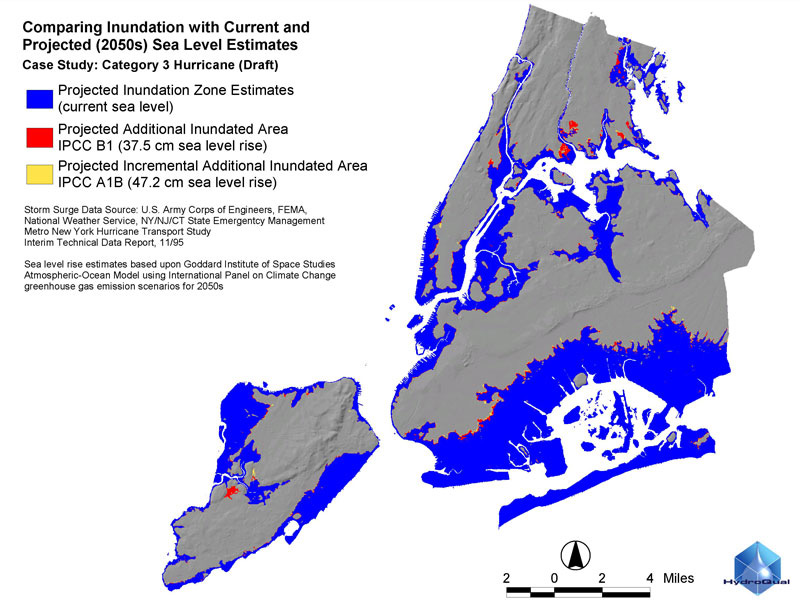