Please read Chapter 3: "Supply, Demand and the Market Process" in the textbook. This chapter covers the material that will be covered in the next three course lessons, although it is in a bit of a different order to how we will cover it. I will focus on a few specific issues, and try to go into a little bit more depth than the text. So, I suggest that before you start this lesson, you should read through Chapter 3 and then refer back to the appropriate material as we work through the next three lessons.

In Lesson 1, we spoke of some of the axioms of economics and the fundamental questions that we are trying to address: who makes and sells what, and for how much?

Historically, there have been two basic schools of thought, which can be roughly categorized as "markets" (or "capitalism") and "central planning." In centrally planned economies, government agents are responsible for making decisions about production, distribution, and pricing of goods. In markets, these decisions are decentralized, placed in the hands of millions of individuals, who invest their time, money and ideas into the manufacture or sale of some product, with the hope of making a profit and enhancing their own lives.

Throughout much of the 20th century, there was tension between advocates of market economies and those of centrally planned ones, but over the past 30 years, there appears to have been a clear shift in thinking across the globe towards market systems. Centrally planned economies were largely shown to be less successful at meeting the needs and wants of their consumers, and less able to efficiently allocate money and resources in production. Even countries that are still nominally referred to as "communist," such as China, have adopted market-based reforms that have led to great increases in the welfare and quality of life of their citizens.

The great problem of attempting to centrally plan an economy is that of information. While it may be possible to understand technology, inputs, and production and distribution costs, and it may be possible to establish what the basic human needs of a society are (e.g., necessary quantities of housing, food, transportation, etc.), it is impossible to assess the entirety of human wants. We all want more than we need, and we all have a different idea of what it is that we want. Indeed, for each of us, what we want is a constantly changing thing, as our tastes, desires and abilities change over the course of our lives. The greatest benefit of a market-based economy is that it is the only place where all of this widespread information about diverse and dynamic human wants is exposed. This information guides producers to alter their production and investment choices to ensure that human needs and wants are addressed. In a market context, this is what Adam Smith referred to as "the invisible hand," the assembly of unseen consumer forces continually changing the production landscape.

When we speak of central planning versus market economies, it is very easy to assume these to be two discrete states of social organization. The reality, of course, is that we exist at some place "in the middle." For this reason, I am reluctant to use the term "free markets," as this implies that under a market system, people are free to do whatever they want. This is not true - there are many constraints on human behavior. Some of these are social and cultural, but a great many are regulatory in nature: governments telling people what they can and cannot do. In the context of an economic system, this is manifested by things like labor laws, product safety rules, hazardous materials rules, consumer protection from fraud at the retail level, and so on. We have a great deal of government involvement in our economic lives, even in the United States, which is frequently held up as the standard-bearer for free-market economics in today's world. Indeed, every year, several thousand pages of new regulations are added at the federal level, and countless thousands more at the state and local levels. Almost no aspect of our economic lives is free of some restriction or regulation.

An economy without any form of government intervention is referred to as "laissez-faire." This is a French term that translates to "let it happen," and the United States is certainly not a laissez-faire economy. The peak of laissez-faire probably occurred in the second half of the 19th century, and gave rise to industrial titans such as Andrew Carnegie and John Rockefeller, who became known as "robber-barons" because of the allegedly predatory way in which they ran their businesses. This gave rise to the first great wave of business regulation, and we have not stopped since. Thus, when speaking of market economies, it is best to refer to them as "competitive markets," and not as free markets, because they certainly are not free in the sense that market participants are not unrestricted agents.

A Model for a Market Economy

The market is a system where producers and consumers interact for the benefit of all involved. It is helpful to look at these two sides of the market separately at first.

On one side of the market is the Demand Side. People on this side of the market can be referred to as consumers, demanders, or buyers - these terms will all be used interchangeably for the rest of this course. Consumers can be thought of as "Utility Maximizers," where the definition of utility is that referred to in Lesson 1. When we speak of consumers, we are generally referring to the end-users of products or services, and not firms that make intermediate purchases of materials or labor.

The other side of the market is known as the Supply Side. On this side, market participants can be called suppliers, producers, or sellers. Once again, all three of these terms can and will be used interchangeably. Producers are typically thought of as profit-maximizers, not utility maximizers, and this is a crucial distinction and affects the way we analyze the behavior of these two sides of the market.

The title of this section uses the term model. A model is a way of representing something else, a kind of "stand-in." A model is necessarily simpler than the thing it is trying to represent and, because of this, there is some detail that is lost in the process. The trade-off that is made when using a model is that a model can make things easier to understand. When we speak of a market, we are talking about something that involves the individual, private decisions of billions of consumers and producers. There is no way in which we can represent all of these decisions and interactions, but we can come up with a tool that illuminates some of the big-picture, general concepts in a way that is easy to grasp and comprehend, and has stood the test of usefulness over time. This is what the supply and demand concept consists of - it is elegant in its simplicity, and extremely powerful at describing the behavior of markets in a generalized way at a high level.

If you choose to study economics in more depth after this course, you will find that the supply and demand diagram will still be the key tool that is used. But at higher levels, we look in more detail at either aberrations from the simplified behavior described in the supply and demand diagram, or we look in more detail at specific parts of the market. However, my point here is that the supply and demand concept is the main underlying model of a market economy, and a good and thorough understanding of it will allow you to make a solid analysis of any situation involving market interactions, even without deeper knowledge of the situation at hand.

The main goal of analyzing markets is to try to figure out: 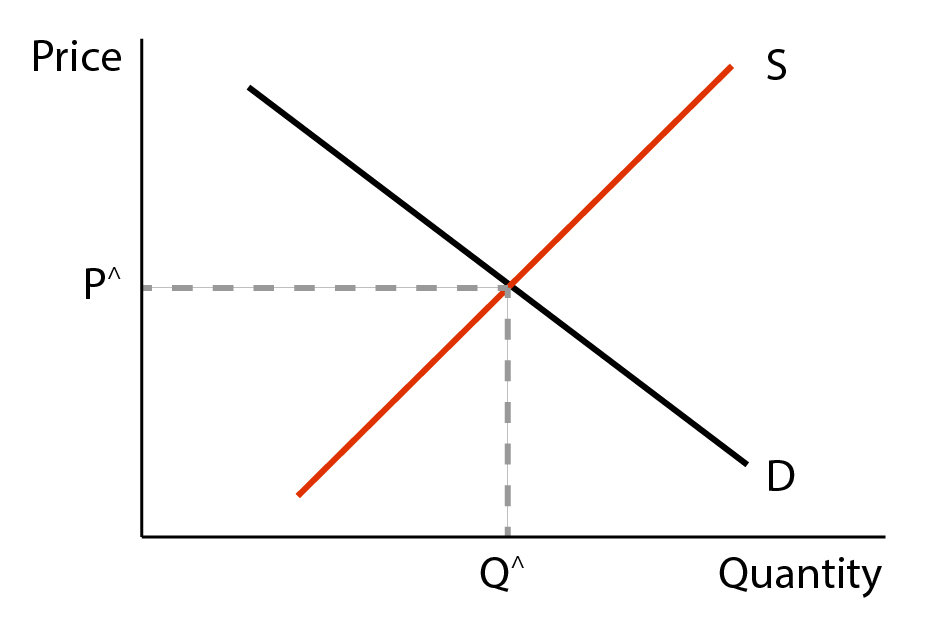 Parts of the Supply and Demand Diagram:

Markets are dynamic—always changing—so a supply-demand diagram is always just a “snapshot” of a market at a moment in time. Another dimension is “time,” which we do not consider at this point.

Figure 2.1 has two lines, which represent the two sides of the market, or the two parties in any economic transaction. The demand curve describes the behavior of the demanders in the economy. These people can also be called buyers or consumers. Restating: "demanders," "buyers," and "consumers" all mean essentially the same thing.

The other side of the market is described by the supply curve - the red upward-sloping line in the diagram above. The people *(or, typically, firms) on this side of the market can be called suppliers, or sellers, or producers. These three terms all mean basically the same thing.