Before we get into quantitative methods for considering uncertainty in energy project evaluation, have a look at the piece from the EIA on the wind production tax credit as well as the following story from CNN on nuclear energy. (Note that the EIA story is still relevant even though the debate on the wind production tax credit has now come and gone.)

There are certainly enough differences between the situations being faced by the wind and nuclear industries. But the commonality among them here is that both of these low-carbon power generation technologies face substantial uncertainty that will affect project investment decisions going forward. Wind energy has enjoyed a number of years of rapid growth in the U.S. and in Europe, but it is unclear how long that level of growth can be sustained. Nuclear energy appears to be in a period of decline. Whatever happened to the “energy transition” towards low-carbon electricity generation?

Figure 10.1 shows a screen shot from the PJM Renewable Dashboard, which illustrates all renewable energy projects within the PJM footprint that are currently in the queue for permission to interconnect to the PJM transmission grid. (There isn’t anything particularly special about PJM here, except that they have this nice graphical display of proposed and pending renewable energy projects.) The figure, which changes frequently as new projects are added and withdrawn from the queue, suggests a lot of enthusiasm for renewable electricity generation in PJM, particularly solar and wind. In fact, until coal-fired power plants started announcing their intention to retire a couple of years back, wind energy represented the largest source of planned new generation capacity of any type in the PJM system (yes, even more than natural gas, though that is no longer true as gas power plant projects position themselves to replace retiring coal plants). While there is plenty of interest, the reality is that few of these projects will actually get built, because their revenue streams depend on a number of factors that are highly uncertain. 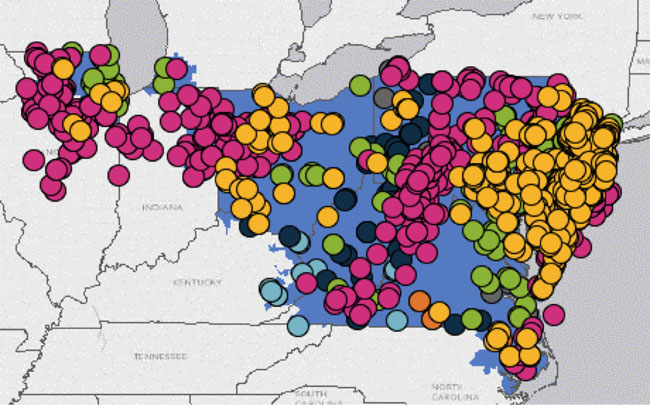 Figure 10.1:All renewable energy projects within the PJM footprint that are currently in the queue for permission to interconnect to the PJM transmission grid

Virtually all investments are always made under the shroud of uncertainty, but the problem is particularly acute for energy investments. The development of energy resources typically requires large up-front capital outlays, so investors need some assurances that revenue streams over time will be sufficient for cost recovery. We will actually discuss this more in Lesson 12 when we cover how specific regulatory and de-regulatory actions have affected the investment environment for power plants.

You can get something of a sneak peak of how changes in market institutions in the electricity industry have increased both the potential financial rewards from low-cost electricity generation but also uncertainty in power generation investment by reading the selection from Morgan, et al., “The U.S. Electric Power Sector and Climate Change Mitigation.”

The example with nuclear energy is primarily an illustration of market uncertainty. Just a few years ago, before the natural gas supply boom, electricity prices were high and nuclear power (having very high reliability and low production costs) was highly profitable. You might remember the profit calculation problems from Lesson 6 – the low-cost generator in that example was representative of a nuclear power plant. Companies that ran large fleets of nuclear power plants well – the biggest in the United States was Exelon – earned large returns for shareholders. Many existing nuclear power plants continue to make money, though the number of nuclear power plant retirements has accelerated in recent years. The biggest problem facing new nuclear plants, as well as some existing plants, is uncertainty in the market price of electricity. In deregulated electricity markets, the price of electricity is most often driven by the price of natural gas. As gas prices have plummeted with the unconventional natural gas boom, so have electricity prices. This squeezes profit margins for existing plants and makes the financial prospects for new plants look bleak. Will natural gas prices rise again in five to ten years (roughly the time line for a new nuclear build in the United States)? Who knows – current markets are not betting on it, as you could observe by looking at the futures curve for natural gas.

The example with wind energy is primarily an illustration of regulatory uncertainty. As we have discovered, wind energy is not always competitive with other forms of power generation without some form of subsidy or incentive (the same could actually be said for most low-carbon power generation technologies, including nuclear). The production tax credit (PTC) was implemented in order to provide a boost to the wind industry. The PTC basically amounts to a direct payment of a bit more than $20 per MWh for all qualifying wind energy plants. Other countries have implemented subsidy programs similar to the PTC, such as feed-in tariffs. But as the EIA article points out, since the PTC does not represent a long-term commitment by the U.S. government (it needs to be renewed periodically), when the PTC is not renewed, wind energy investments shrivel because the future availability of subsidies is uncertain. The piece by Morgan, et al., points out that the lack of a commitment to a carbon policy by the United States has been a major barrier to the development of a variety of low-carbon energy resources – not just wind and solar but also low-carbon bio-energy and technologies that can capture and store greenhouse gas emissions.

Other major sources of uncertainty for energy project include:

Uncertainty cannot be eliminated, but we can incorporate it into our project analyses in a few different ways, as we’ll discuss in the next several components of the lesson. Our use of the word “uncertainty” here rather than “risk” is purposeful. Use of the term “risk” implies some knowledge about the probabilities of uncertain events, like a coin flip or the role of some dice. But placing probabilities on specific events isn’t always straightforward or even possible. So, we use the broader term “uncertainty” to describe situations where some set of future outcomes is unknown. In particular (for our context), these outcomes are unknown at the time that some decision is to be made. Broadly, we can identify a few different types of such decision situations:

We will first discuss decision problems of the second type, then move on to the third type.