Please make sure you read all of Ch 8 in SECS for this lesson, and focus on the section "Empirical Correlation for Components" and this page content. In the two additional readings, it is OK to scan the Stoffel Ch 4 and the Gueymard paper for key elements that are parallel with the lesson and the textbook. I included them also so that you could look back to them later as resources for your career development.

Which is better, direct measurements or making do with estimations from less data?

Now that we have our measurements, how do we make use of them to estimate irradiance on any given tilted surface? In the following section, we want to sort out the way that we measure light in comparison to the way that we use solar data for simulations of SECS in software like SAM (System Advisor Model). The SAM model will only have hourly Global Horizontal Irradiation metrics to use (I), but we will want to estimate the hourly irradiation for an oriented surface (POA, It).

As you have learned from reading Chapter 8, the main way that meteorologists have measured irradiation is from a horizontal surface. However, most of our SECSs are mounted on non-horizontal surfaces. This presents a challenge.

What to keep in mind:

When a collector is oriented horizontally, it does not "see" the ground. In fact, per World Meteorological Organization requirements (Ch. 7: Measurement of Radiation), a pyranometer measuring downwelling (light coming down from the Sun) irradiance must not measure the irradiance from the ground. This means we are missing a key piece of information with only a GHI measure from a single fixed, horizontal pyranometer.

Solar radiation that reaches the earth from the sun is generally not constant. A number of factors can affect the amount of radiation we receive. These factors include time of day and year, state of the atmosphere, and presence of aerosols. As stated earlier, the total solar radiation incident on a surface comprises of different components, and there is a simple reason for this. Not all the light emitted by the sun reaches the surface of the earth without any interference. As the emitted light passes through the atmosphere, a number of things generally happen. Some of the light may be absorbed, scattered, or reflected by the air molecules, water vapor, and aerosols. This portion eventually reaches the earth but not with the full intensity it had when originally emitted by the sun. We call this diffuse irradiance (Gd).

When a collector is tilted: the diffuse component from the ground tends to increase in contribution.

Air chemistry in the path of the beam will scatter the energy into a small cone of light, called the circumsolar component of the sky dome. Next, the scattering events that occur during the day produce a blue or white hue across the hemispherical surface. This is referred to as the sky diffuse component of irradiance. A horizon diffuse component is observed as the path length increases for scattering in the sky. Finally, the reflectance of the ground surfaces will contribute an extra component as long as the collection system is not mounted horizontally. Some light will be reflected from the ground back to the tilted surface. This component is appropriately called ground reflected component.

There also exist portions of the emitted light that reach the earth directly with no interference from the atmosphere. This is called the direct or beam irradiance (Gb). If we have a measurement of DNI (Direct Normal Irradiance), then we can quickly estimate beam irradiance for the horizontal surface via the cosine relation to the zenith angle (). Atmospheric conditions, however, have a strong influence on the amount of beam radiation we receive. On clear, dry days, atmospheric condition can attenuate beam radiation by around 10% and by nearly 100% on very dark cloudy days. 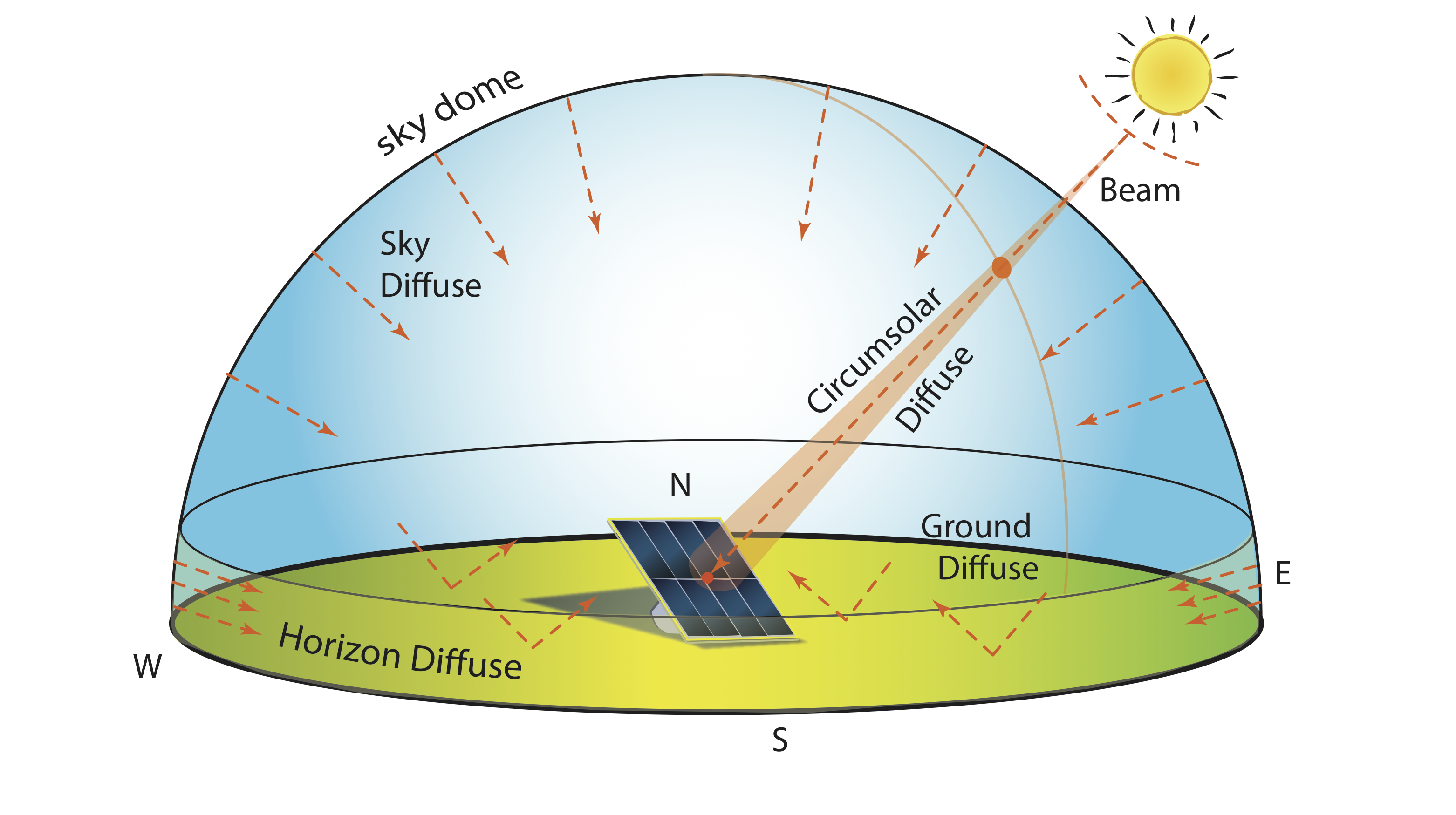 The Flow of Data from GHI to components to POA

In the following flow chart of data processing, we see that measured irradiance (shortwave, from the Sun) is measured in four typical manners: 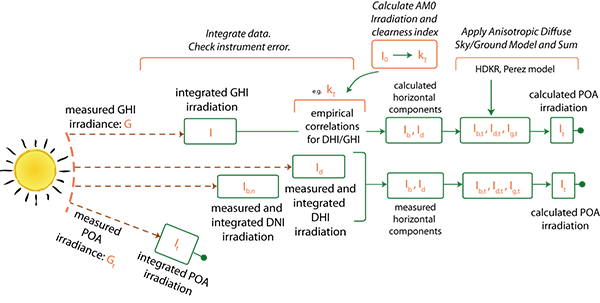 In the figure, we have integrated the time step to 1 hour of irradiation on a horizontal and tilted surface, respectively: I and It.

Measurement 1 (GHI) is the most common for a local site assessment in SECS design. Equipment for measuring DNI and DHI are atypical in an application site where the initial site assessment is beginning, and are absent from our satellite maps of the solar resource. Measurement 4 (POA) is becoming more and more popular, as it can potentially remove several steps of error propagation from empirical correlation on site.

Looking across the top line (Measurement 1), we see that we must perform "empirical correlations" using a metric called an "hourly clearness index" (kT) to arrive at "calculated horizontal components of Ib and Id (beam and diffuse hourly irradiation). Then, we must apply an "anisotropic diffuse sky/ground model" and sum the tilted components of irradiation, to finally arrive at a calculated POA irradiation estimate.

Paths 2 and 3 add to the level of precision by stepping past the clearness index correlations (which is error-prone) before applying an anisotropic diffuse sky/ground model and summing to a new calculated POA estimate.

Path 4 skips all of the empirical models and directly measures and integrates the irradiation on a POA surface. The one additional benefit would be to have a DNI measure along with a POA measure, for component decomposition if necessary (required for windows, for example).