These are some available heat transfer and storage fluids currently used:

Water is the most available and cheapest fluid to use, but the problem with water is that it has very limited temperature range when it is liquid. Keeping water in liquid state above 100 oC requires high pressure, which adds significantly to system complexity and cost. Oils and other synthetic liquids are commonly used in CSP plants, as they have a much wider working temperature range. Molten salts are probably the most common storage medium (Wu et al., 2001), but are not the best heat transfer medium, because salt tends to solidify in tubes at lower temperatures, blocking transport. Additional heating will need to be provided in that case to start up the plant. There are developments for novel fluids that can be used for both heat transfer and storage at the same time (Moens and Blake, 2004). Some commonly used fluids and their working temperature ranges are shown in the diagram in Figure 9.1.

Molten salt storage is employed at many existing solar thermal plants, so we are going to look at it in some more detail. As was mentioned above, salt "freezing" (i.e., transforming from a molten state to solid state) can present some problems, because the salt is supposed to circulate through the tubes to deliver thermal energy to the steam generator or another application. So, to achieve the lowest possible "freezing" temperature, an eutectic mixture of salts is used.

A eutectic system is a homogeneous mixture of two or more components, which together have a lower melting point than each of them separately. The eutectic mixture melts as a whole only at a specific ratio of those two components in the mixture. A generic eutectic phase diagram is shown below. 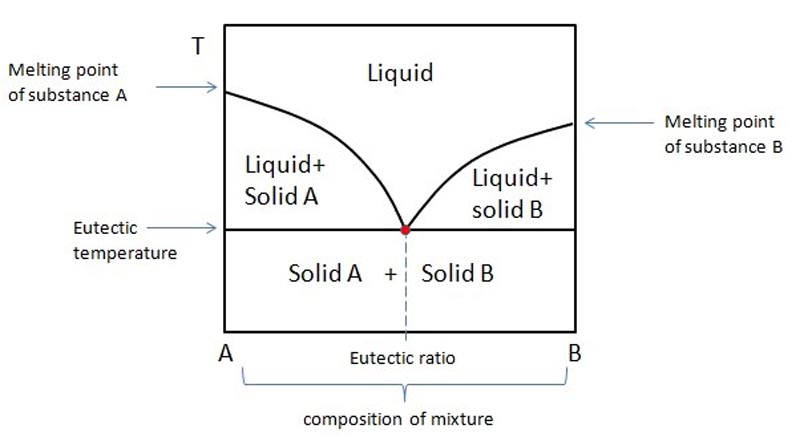 Figure 9.2. Generic phase diagram of an eutectic system. The horizontal axis measures the composition of mixture of components of A and B - point A represents 100% of component A, and point B represents 100% of component B. Any composition in between is the proportional mixture. The vertical axis is temperature. The melting temperatures of pure A and B are marked on left- and right-hand sides respectively. The eutectic mixture of A and B has much lower melting point (marked by the red dot).
Credit: Mark Fedkin.

The eutectic temperature for those compositions is in the range 142 to 145 oC.

The molten salt is used for high temperature energy storage applications (above 400 oC) because typical thermal fluids, such as synthetic oils, have temperature limitation and decompose beyond the maximum allowable temperature (410-430 oC).

This is how the molten salt storage is employed in a solar thermal plant. First, the solar energy is caught by the collectors and concentrated on the receiver tube filled with heat transfer fluid. The heat transfer fluid (with temperature of ~393 oC) is circulated in a closed loop to deliver heat to the steam generator, which produces superheated steam, and then the thermal fluid flows back to the solar collectors (with temperature of ~ 293 oC). Such a loop can only operate during sunshine hours. To extend the steam generation beyond sunshine hours, molten salt thermal energy storage is used. The thermal storage usually consists of two salt storage tanks. In this case, the closed loop with the heat transfer fluid is passed through one of the salt tanks, where salt is heated to the temperature of ~ 384oC. The tank is insulated, so salt can stay hot for a substantial period of time (estimated heat loss ~0.5 oC per day). The molten salt is stored in the tanks at ambient (atmospheric pressure). To discharge heat during night hours, the molten salt from the hot tank is pumped through the steam generator to produce steam, and then to the cold storage tank (at ~ 292 oC). In this configuration, some part of the heat transfer fluid loop is diverted to the heat exchanger between the cold and hot salt tanks. The cooled molten salt is then pumped through the heat exchangers and returns to the hot salt tank.

Solar tower systems can use molten salt as heat transfer fluid and heat storage medium without involving any additional thermal transfer fluid loops due to higher radiation concentration temperatures. In this case, molten salt is flowing through the tower-mounted molten salt receiver, where it is heated to 565 oC. Then the salt is supplied to the hot salt tank, from where it flows to the steam generator. This concept is illustrated on the eSolar website.

In this case, the use of molten salt for both heat transfer and thermal energy storage minimizes the number of storage tanks and salt volumes needed.

The molten salt storage is claimed to be a most cost effective solution for solar thermal plants. It rarely needs replacing or topping up for the 30+ year life of the plant. Also, salt is a non-toxic environmentally friendly mixture, which can be utilized as high grade fertilizer when eventually discarded (Solar Reserve, 2015).

Storing energy in fluids involves exchanging heat between different types of fluids in heat exchangers. For example, transfer of heat from a thermal fluid in solar-heated tubes to the molten salt reservoir requires a heat exchanger; further transfer of heat from the molten salt to water to produce steam would involve another heat exchanger. There is a thermal physics method to calculate the effectiveness of the heat transfer in different types of heat exchangers and to evaluate their performance. One example of such calculation is given in Section 3.17. of the book "Solar Engineering of Thermal Processes" by Duffie and Beckman (2013), referred to below.

This reading is available online through PSU Library system. It is an optional material to study if you are interested in more insight in how heat is transferred from one medium to another, and what kind of losses can be expected. More thorough consideration of thermal topics is included in EME 811, which is also part of RESS Solar Option program.