Why are there cities? Why do large numbers of people cluster near each other? Sometimes the reasons are predominantly environmental, such as the people who cluster at natural harbors to work at ports. Other times, the reasons are predominantly social, such as the people who cluster at political capitals to work in government. But whatever the reason, cities invariably exist so that people can interact with each other in person. Interacting with each other in person requires transportation. We travel from home to work, shopping, entertainment, and civic spaces.

Please read the article "Liberating Cities from Cars" on the Planetizen website.

As you read this, think about your answers to the questions below:

Let’s start by looking at Acorn Street on Beacon Hill in Boston: 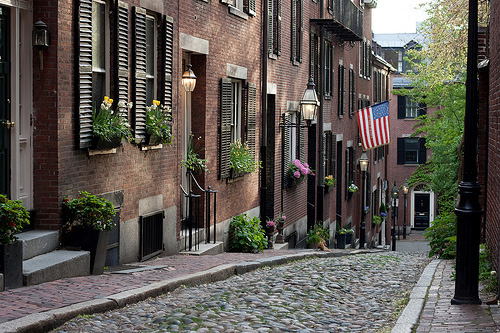 Beacon Hill is just north of Boston Common, which we studied in Module 4. It is, thus, immediately adjacent to downtown Boston, where there are many places to work, shop, and seek entertainment, among other things. One can easily walk to all of these places. But look at the photo. This urban area is also designed in a way that makes walking easy and desirable. Beacon Hill was developed mostly in the 1800s when walking was the transportation mode of choice. Today, Beacon Hill is a very wealthy neighborhood. Many people there can afford cars, but they often choose not to use them because walking is a more attractive option.

Now take a look at another part of Boston: Jamaica Plain. 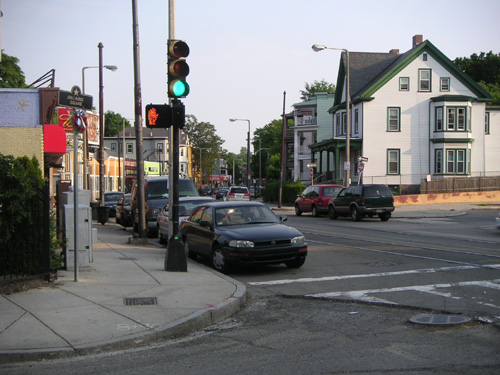 This image shows Centre Street in Jamaica Plain, about four miles southwest of Beacon Hill and downtown Boston. Notice the rail line going through the middle of the street. This is for a streetcar – the “E” on Boston’s Green Line. This type of neighborhood is called a streetcar suburb because it was designed for residents to commute into the city via streetcar. Similar streetcar suburb neighborhoods exist in many cities across the United States. These neighborhoods were built mainly in the early 1900s. They are more sparse than neighborhoods built mainly for pedestrian travel, but they are dense enough to keep houses within walking distance of streetcar stops. Likewise, they’ll almost always have sidewalks. There are often small “main street” style stores near the streetcar stops. People might shop at these stores on their way to or from work.

As an interesting side note, the E no longer goes through this part of Jamaica Plain. In 1985, it was “temporarily” replaced by a bus line. Whether to bring the E back here is a controversial issue in the neighborhood. Elsewhere in the country, many streetcar systems have been dismantled. In at least some cases, the automobile and bus industry appears to have played a role in the change. Today, bus lines often run where streetcar lines once did, though many people in streetcar suburbs frequently use automobiles. The choice between cars and transit is a collective action problem.

As the above discussion suggests, where we live has a large impact on what type of transportation we use. If we live in a pedestrian-oriented neighborhood like Beacon Hill, we’re a lot more likely to walk to get to places nearby and to take transit to go further away. If we live in a streetcar suburb, we’re likely to use a mixture of transit, walking, and cars. If we live in an automobile suburb, we’ll probably take cars almost everywhere we go. Two main factors in the impact of urban design on transportation choice are urban density and use mixture.

Urban Density and Use Mixture

Urban density is, in rough terms, the amount of urban development per unit area. Higher density can be achieved via taller buildings and narrower streets. It can also be achieved by putting more development in a given square foot of floor space, sidewalk space, etc. For example, when a single-family house is converted into two apartments for two families, urban density is increased with only minor tweaks to the building. Pedestrian-oriented neighborhoods tend to be higher density, and automobile suburbs tend to be lower density. Higher densities generally have lower environmental impacts, though there are some exceptions. For example, shorter buildings don’t require elevators.

Use mixture refers to the mix of types of end uses found within an urban area. A mixed-use area will have many different uses. Residences, office areas, shopping, entertainment, and the government will all be close together. This reduces the distances required for transportation and makes it easier to walk or bike from place to place. It can also help certain types of businesses. For example, many downtown business districts are very single-use areas and restaurants there are only open for lunch. In some cases, apartment buildings are opening up in the area, which helps more people walk to work and also brings customers to the restaurants at different hours. Pedestrian-oriented neighborhoods tend to be more mixed-use, and automobile suburbs tend to be more single-use. In general, mixed-use areas will have lower environmental impacts than single-use areas.

The health of people living in cities is affected by many factors. One important factor is the amount of exercise that they get. This, in turn, can be heavily influenced by urban design. When we drive everywhere, we don’t get any exercise unless we go out of our way for it. When we walk and bike everywhere, we get a lot of exercise just by getting around town. This is much healthier for our bodies. Even taking transit gives us some exercise because we have to walk to and from the transit stops. It is thus no surprise that people who live in pedestrian-oriented neighborhoods and streetcar suburbs are on average healthier than people who live in automobile suburbs. Of course, the urban environment does not completely determine what exercise we get. It’s entirely possible to be very healthy in an automobile suburb or very unhealthy in a pedestrian-oriented neighborhood. But promoting resident health is another reason to favor high-density, mixed-use, pedestrian-oriented development.