Cities have many different impacts on the environment. Furthermore, different types of cities will have different environmental impacts. Here we consider some major contributors. As you read about these contributors, think about how they might be interconnected with one another.

The efficiency of a car, bus, or train depends heavily on how many people are in it. A bus at average and maximum passenger loads gets about 40 and 330 miles per gallon per passenger respectively. Note that this does not factor in the energy consumed by the passengers’ bodies as they sit or stand in the bus. Trains can be even more efficient than buses because their metal wheels and rails have less friction than buses’ rubber tires on pavement. Furthermore, trains can move larger volumes of passengers. A bus or train with one passenger will consume a lot more energy than a car with one person in it. This means that cars are not necessarily the least efficient option.

Consider This: Transit and Traffic: A Collective Action Problem

Have you ever been stuck in traffic? Did you enjoy it? Most people don’t. We would rather get to our destination sooner.

If you live in an area where both cars and transit are options, then you may face a collective action problem. In this scenario, regardless of what everyone else does, you’ll reach your destination faster if you drive. However, if everyone takes transit, then everyone will reach their destinations faster than if everyone drives. This is because transit can move more people along a street per unit of time. It’s like using a big fire hydrant hose to move water instead of a little gardening hose. Transit can do this because, in a bus or train, people can sit or stand right next to each other, whereas in cars there’s a lot more space between each individual person. Furthermore, when streets get crowded, there can be more people taking transit, meaning that the transit system can run vehicles more frequently and people have to wait less time for them.

Given what you know about collective action, how would you solve this problem?

Buildings are perhaps the single biggest contributor to the environmental impacts of cities. There are major impacts throughout the lifecycle of a building. When buildings are constructed, they tend to require a lot of natural resources for the building materials and energy for the construction process. Then, once they’ve been built, they use a lot of energy for heating, air conditioning, lighting, and appliances. Finally, when the building is no longer desired, something must be done with the building materials.

The U.S. Green Building Council (USGBC) has implemented the LEED® program since 1998 to encourage sustainable building design, construction, operation, and maintenance. LEED stands for Leadership in Energy and Environmental Design and serves as a "yardstick" to measure the sustainability of structures by design and construction industry. An LEED-certified building is often referred to as a green or sustainable building. If a building meets sustainability criteria, it receives LEED certification on one of four levels (LEED Certified, Silver, Gold or Platinum, from the lowest to the highest level). The rating is based on the points a building can earn for sustainable building site selection, maximized water use efficiency, minimized energy use and effect on the atmosphere, advancements in indoor environmental quality (e.g., material, mechanical, and lighting performance).

For example, Penn State's (UP campus) Stuckeman Family Building, home of the School of Architecture and Landscape Architecture, is a LEED Gold complex thanks to its sustainable features such as an exterior construction of recycled copper and durable brick, rainwater harvesting and recycling for landscape irrigation, intelligent lighting control system, and energy-efficient motorized windows that take advantage of natural ventilation (Probing Question: What is a LEED building?).

Penn State now requires that all new and renovated facilities be LEED certified. Learn more about both current and future LEED projects at Penn State.

Cars, buses, power plants, factories, and fireplaces all put pollution into the air, affecting the health of everyone who breathes the air in. All else equal, cities with more of these activities will have more air pollution. But all is not always equal. Some urban areas have more air pollution even when they have the same amount of polluting activities. Here, the environment can be a big factor.

Temperature inversions are usually found in cities with a source of colder air and mountains that trap the cold air in. One example is Los Angeles, which receives cool air in from the ocean. Another is Salt Lake City, whose surrounding mountains also make for famous ski resorts. Here is a photograph from the ski slopes of the Alta resort. Mountains in the background can be seen poking up above low-lying clouds and smog, the result of a temperature inversion. 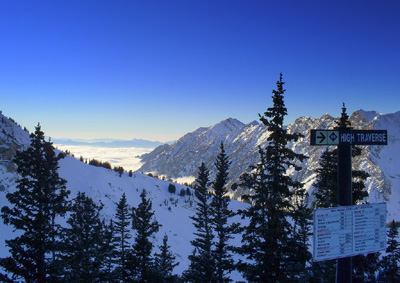 Here’s a view from a different site, showing the city in the valley below: 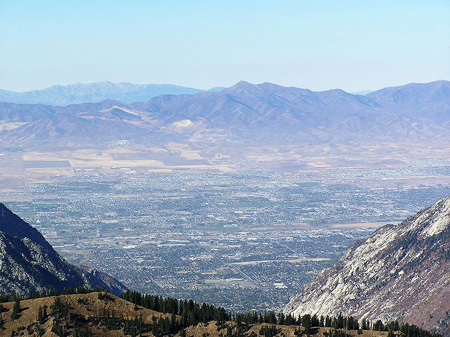