Geography of Food and Agriculture

Food, and its production through agriculture, are core topics in Human-Environment Geography. Political Ecology evolved as a field largely to deal with problems and problem narratives around food production (for example, to counter narratives of overpopulation as a reason for degradation of agricultural land). One of the earliest scholars to use a Political Ecology approach was Michael Watts in his 1983 book "Silent violence: food, famine, and peasantry in northern Nigeria" in which he argued that famine in Nigeria was linked to colonial policies that pushed commodity production on rural farmers, making them less resilient to drought. This was followed by Blaikie and Brookfield's 1987 "Land degradation and society" which is perhaps the best known example of a Political Ecology approach. Blaikie and Brookfield examined why land management often fails to prevent soil erosion, and sought to counter the narrative that poor farmers are poor land managers, to blame for soil degradation. They demonstrated how land accumulation by (largely white) elites in Southern Rhodesia had pushed poor farmers to more marginal land with higher risk of degradation. Since the 1980s, food and agriculture has remained a central topic in Human- Environment Geography. For example, Judith Carney, Rick Schroeder, Rebecca Elmhirst, and others have worked to demonstrate how social, economic, and political change in agricultural systems has lead to increasing burden on women around the world (Canrey 1993, Schroeder 1999). Penn State's Karl Zimmerer has published extensively on the Geography of Food and Agricultural systems in South America. In his book "Changing Fortunes: Biodiversity and Peasant Livelihood in the Peruvian Andes," he pushed back against the idea that the agrobiodiversity (diversity of crops grown) of the Andes was hopelessly endangered, by highlighting contemporary practices and attitudes that act to conserved agrobiodiversity, essential to adaptation.

Human-environment geographers are attentive to the ways narratives are used to justify or promote certain policies and this includes food and agriculture policy at the international scale and national scale, including here in the USA. For example, Jarosz (2014) examined the history and narratives around food security and food sovereignty, noting that food sovereignty narratives have evolved to fill a gap left by the fact that food security narratives have failed to adequately address justice and poverty as a driver of food insecurity. This week, you will read a paper by Garret Graddy-Lovelace on the ways that US agricultural policy perpetuate injustice and inequity.

When geographers examine global value chains, food is often the commodity used to demonstrate the ways global interconnections and telecoupling impact both producers and consumers (Benson and Fischer 2007, Cook 2004, Zimmerer et al. 2018). Freidberg's  (2004) "French Beans and Food Scares" documents the way food safety policies demanded by European consumers perpetuate inequality for producers in Africa. The films you will watch this week will highlight the ways food has become a commodity, and the implications for farmers and consumers' health and well-being.

Finally, geographers are, of course, also interested in the ways food impacts health. Guthman's book “Weighing In: Obesity, Food Justice, and the Limits of Capitalism” challenged assumptions about its causes and consequences of the “obesity epidemic”, looking at why we produce cheap, over-processed food, as well as why we eat it. Recently, geographers like Julie Guthman and Becky Mansfield have been re-examining the idea from food justice movements that the disproportionate prevalence of obesity and type 2 diabetes among certain minoritized populations is caused by injustice in the food system (such as food deserts) to include ideas from epigenetics, suggesting that these inequalities result due to the fact that a person's historical exposure to food and toxins can change the expression of their genetic code.

Throughout this course, we have learnt about the ways food production is destroying our planet and harming farm workers all over the planet. Achieving global food security and nutrition is one of the greatest challenges humanity faces today; how to achieve these in a sustainable manner is an almost inconceivable challenge. 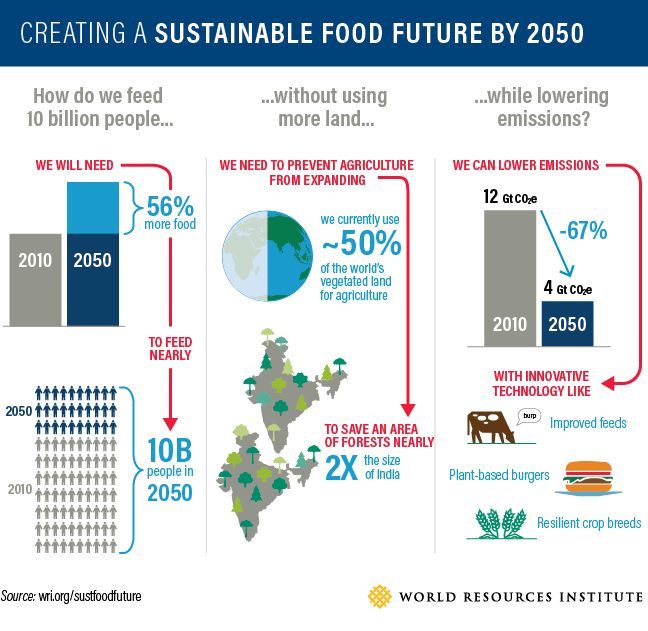 Creating a Sustainable Food Future by 2050

However, solutions and ideas exist about how we can achieve this. The World Resource Institute has recently released a publication called "How to Sustainably Feed 10 Billion People by 2050, in 21 Charts", check it out for some good facts and figures that you may want to keep in mind as we progress through the rest of the course.

Agroecology is an integrated approach that simultaneously applies ecological and social concepts and principles to the design and management of food and agricultural systems. It seeks to optimize the interactions between plants, animals, humans, and the environment while taking into consideration the social aspects that need to be addressed for a sustainable and fair food system. While Oliver de Schutter was the UN Special Rapporteur on the right to food, he argued not only that Food was a Human Right, but that access to food for all people must be achieved though both sustainable and just agricultural practices embodied by an Agroecological approach (Sage 2014).  Today, (Agroecology is a central aspect of the Food and Agriculture Organization of the United Nations' work). A recent study published in Nature found that 29% of all farms worldwide, and 9% of the agricultural land, now include some form of sustainable agricultural practice (including: integrated pest management, conservation agriculture, integrated crop and biodiversity, pasture and forage for cover, trees, irrigation management and small or patch systems) (Pretty et al. 2018). This week, you will read a paper by one of the most famous champions of Agroecology, Miguel Altieri. Dr. Altieri was born in Chile and is a Professor at the University of California, Berkeley in the Department of Environmental Science, Policy, and Management. Many consider him the father of Agroecology.

Food Sovereignty focuses on transforming the current food system to ensure that those who produce food have equitable access to, and control over, land, water, seeds, fisheries, and agricultural biodiversity (Jarosz 2014). The Food Sovereignty movement was started by the international peasants’ organization, Via Campesina, after the 1995 Zapatista uprising in Mexico. The Zapatista uprising was, in part a response to the dumping of subsidized American corn in Mexican markets following the passage of NAFTA (which acted to drop the price of corn below what small-scale farmers could compete with and also led to massive international migration of farmers from Mexico to the USA and elsewhere) (Jarosz 2014).

Philip McMichael: Professor of Development Sociology at Cornell University. His research examines historic and modern capitalist practice through the lens of agrarian questions, food regimes, agrarian/food sovereignty movements, and the implications for food systems of agrofuels and land grabbing.

Henry Bernstein: Emeritus Professor of Development Studies in the University of London at the School of Oriental and African Studies and Adjunct Professor at COHD, China Agricultural University, Beijing. His research expertise is in political economy of agrarian change, social theory, peasant studies, land reform, and the rural economy in South Africa.

Olivier de Schutter: Professor at the Catholic University of Louvain and at the College of Europe (Natolin). His interests align with international human rights and fundamental rights in the EU, with a particular emphasis on economic and social rights and on the relationship between human rights and governance.

Raj Patel: A New York Times best-selling writer, academic, and human rights activist. He is a Visiting Scholar at UC Berkeley's Center for African Studies and an Honorary Research Fellow at the University of KwaZulu-Natal in Durban, South Africa. He is the author of Stuffed and Starved: The Hidden Battle for the World Food System, and the New York Times and international bestseller, The Value of Nothing.

If you would like to watch all lectures from the conference, YouTube has a complete playlist of the lecturers.

Carney, J. (1993). Converting the wetlands, engendering the environment: The intersection of gender with agrarian change in the Gambia. Economic Geography, 69(4), 329-348.

‹ Lesson 6 Overview up Lesson 6 Reading ›
GEOG 430: Human Use of the Environment