As mentioned in previous lessons, the earliest web maps were typically drawn on the fly by the server, no matter how many layers were available or requested. These are the types of maps you just created using GeoServer and WMS. As you may have noticed, the symbol sets and labeling choices for this type of map are relatively limited and complex to work with. In fact, for many years, web cartographers had to build a map with minimal layer set and simple symbols to avoid hampering performance. In many cases, a cartographer was not even involved; instead, the web map was made by a server administrator tweaking XML files that defined the layer order, symbol sizes, and so forth. This was the case with both open specification web services (like WMS) and proprietary web services (like Esri ArcIMS).

Part of this approach stemmed from early efforts to make web GIS applications look exactly like their desktop counterparts. Sometimes these are referred to as “Swiss Army Knife applications” because they try to do everything (you may know one!). People expected that in a web GIS they should be able to toggle layer visibility, reorder layers, change layer symbols on the fly, and do everything else that they were accustomed to doing on the desktop. Ironically, this mindset prevailed at a time when web technology was least suited to accommodate it.

In the mid-2000s, after Google Maps, Microsoft Virtual Earth (now Bing Maps), and other popular mapping applications hit the web, people started to realize that maybe they didn't need the ability to tinker with the properties of every single layer. These providers had started fusing their vector layers together in a single rasterized image that was divided into 256 x 256 pixel images, or tiles. These tiles were pregenerated and stored on disk for rapid distribution to clients. This was done out of necessity to support hundreds or thousands of simultaneous users, a burden too great for drawing the maps on the fly.

The figure below shows how a tiled map consists of a "pyramid" of images covering the extent of the map across various scales. Tiled maps typically come with a level, row, and column numbering scheme that can be shared across caches to make sure that tile boundaries match up if you are overlaying two tile sets. 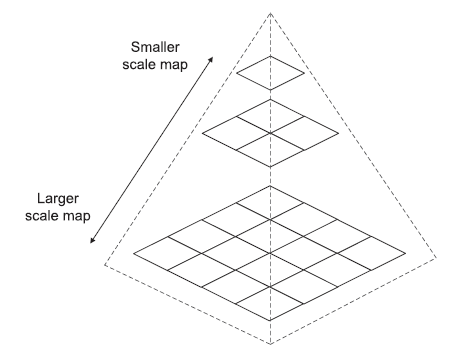 Figure 5.1 Tiled web maps take the form of a pyramid where the map is drawn at a progressive series of scale levels, with the smallest (zoomed out) scales using fewer tiles.

Cartographers loved the tiled maps, because now they could invest all the tools of their trade into making an aesthetically pleasing web map without worrying about performance. Once you had created the tiles, you just had a set of images sitting on disk, and the server could retrieve a beautiful image just as fast as it could retrieve an ugly one. And because the tiled map images could be distributed so quickly by a web server, Google and others were able to employ asynchronous JavaScript and XML (AJAX) programming techniques to retrieve the tiles with no page blink as people panned.

This was revolutionary. Which would you rather have: a slippy map with stunning cartography and no layer control, or a clunky and ugly map with the ability to reorder layers and adjust the color of a school? Some longtime GIS geeks had to stop to think about this, but for the common web user, the choice was a no-brainer.

Within a year or two of Google Maps' release, commercial GIS software began offering the ability to build map tiles. For many, ArcGIS Server was desirable because the map could be authored using the mature map authoring tools in ArcMap; however, cost was a concern for some. Arc2Earth was another commercial alternative. The free and open source Mapnik library could also build tiles, but it wasn't until recent years that projects like TileMill wrapped a user-friendly GUI around Mapnik. 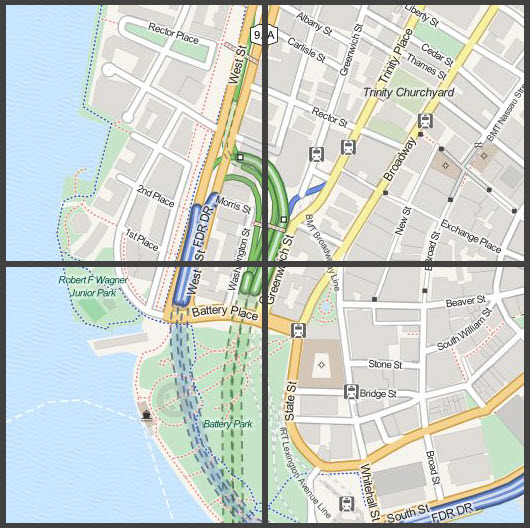 Tiled maps were the only model that could reasonably work for serving complex web maps to thousands of simultaneous users. However, they eliminated the ability for users to change layer order or symbols. People started working around this by serving out their general-purpose basemap layers as tiles and then overlaying a separate layer with thematic information. The general-purpose basemap tiles could be re-used in many applications. The thematic layers could also be tiled if the data didn't change too quickly or cover too broad an area at large scales. For example, you saw in Lesson 2 that the Microsoft Bing Maps traffic layer is served as PNG tiles.