In this section, you will understand the value of studying area maps for a project prior to the development of the flight plan.

Flight planners should acquaint themselves with the project area through two types of maps before proceeding with further steps of the design; those are U.S. Topo Quadrangle Maps and Sectional Aeronautical Charts.

The U.S. Topo Quadrangles Map, mainly a topographic map, shows the details of the contours of the land (terrain elevation). See Figure 4.1. This type of map reveals all information that a planner needs about the topography in the project area. Topography affects flight plan parameters such flight lines, spacing, and imagery spacing. Quad maps can be downloaded from the USGS. You can also review a sample of such maps for the State College area.

Sectional Aeronautical Charts, which are also called VFR charts (Figure 4.2), are described as “the primary navigational reference medium used by the VFR pilot community. The 1:500,000 scale Sectional Aeronautical Chart Series is designed for visual navigation of slow to medium speed aircraft. The topographic information featured consists of the relief and a judicious selection of visual checkpoints used for flight under visual flight rules. The checkpoints include populated places, drainage patterns, roads, railroads, and other distinctive landmarks. The aeronautical information on Sectional Charts includes visual and radio aids to navigation, airports, controlled airspace, restricted areas, obstructions, and related data. These charts are updated every six months, most Alaska Charts annually. To better understand these charts, review the FAA “Aeronautical Chart User Guide”.  You can also watch this YouTube video on learning how to read the sectional charts:. You can also consult the "The FAA Aeronautical Chart User’s Guide" for complete details on the charts.

The VFR acronym is adopted from “Visual Flight Rules” where a pilot relies on the visual see-and-avoid rule during flight. To download such charts, visit the FAA site. 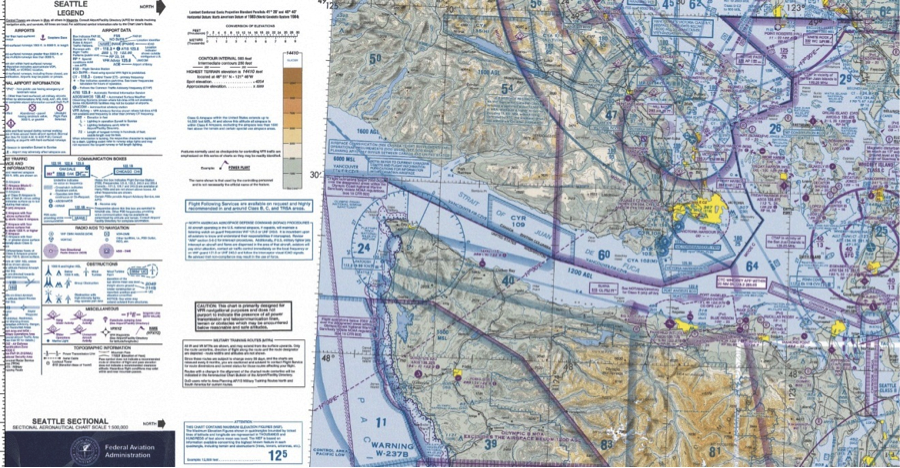 The topographic map and the aeronautical chart provide an overview of the area and the contents of the ground cover (both natural and manmade), restricted airspace such as airport approaches, high towers, etc.

No less important than visualizing sectional chart, is to utilize the online FAA sites and other services which allow you to zoom in to your geographic location to stand on the airspace status and the allowed flights ceiling. Here are couple of the free services available to the public:

2. Visualize it: See FAA UAS Data on a Map