Understanding atmospheric thermodynamics begins with the gas laws that you learned in chemistry. Because these laws are so important, we will review them again here and put them in forms that are particularly useful for atmospheric science. You will want to memorize these laws because they will be used again and again in many other areas of atmospheric science, including cloud physics, atmospheric structure, dynamics, radiation, boundary layer, and even forecasting. A constant pressure balloon stays aloft for weeks at an altitude of 100,000 ft so that the instruments in the attached gondola can make long-term measurements.
Credit: National Scientific Balloon Facility, Palestine TX

Before you begin this lesson's reading, I would like to remind you of the discussion activity for this lesson. This week's discussion activity will ask you to take what you learn throughout the lesson to answer an atmospheric problem. You will not need to post your discussion response until you have read the whole lesson, but keep the question in mind as you read:

This week's topic is a hypothetical question involving stability. The troposphere always has a capping temperature inversion—it's called the stratosphere. The tropopause is about 16 km high in the tropics and lowers to about 10 km at high latitudes. The stratosphere exists because solar ultraviolet light makes ozone and then a few percent of the solar radiation is absorbed by stratospheric ozone, heating the air and causing the inversion. Suppose that there was no ozone layer and hence no stratosphere caused by solar UV heating of ozone.

Would storms in the troposphere be different if there was no stratosphere to act like a capping inversion? And if so, how?

You will use what you have learned in this lesson about the atmosphere's pressure structure and stability to help you to think about this problem and to formulate your answer and discussions. So, think about this question as you read through the lesson. You'll have a chance to submit your response in 2.6!

The atmosphere is a mixture of gases that can be compressed or expanded in a way that obeys the Ideal Gas Law:

Recall that a mole is 6.02 x 1023 molecules (Avogadro’s Number). Equation 2.1 is a form of the ideal gas law that is independent of the type of molecule or mixture of molecules. A mole is a mole no matter its type. The video below (6:17) provides a brief review of the Ideal Gas Law. Note that the notation in the video differs slightly from our notation by using n for N, P for p, and R for R*.

Usually in the atmosphere we do not know the exact volume of an air parcel or air mass. To solve this problem, we can rewrite the Ideal Gas Law in a different useful form if we divide N by V and then multiply by the average mass per mole of air to get the mass density:

where M is the molar mass (kg mol–1). Density has SI units of kg m–3. The Greek symbol ρ (rho) is used for density and should not be confused with the symbol for pressure, p.

Thus we can put density in the Ideal Gas Law:

Density is an incredibly important quantity in meteorology. Air that is more dense than its surroundings (often called its environment) sinks, while air that is less dense than its surroundings rises. Note that density depends on temperature, pressure, and the average molar mass of the air parcel. The average molar mass depends on the atmospheric composition and is just the sum of the mole fraction of each type of molecule times the molar mass of each molecular constituent:

where the i subscript represents atmospheric components, N is the number of moles, M is the molar mass, and f is the mole fraction. This video (3:19) shows you how to find the gas density using the Ideal Gas Law. You will note that the person uses pressure in kPa and molar mass in g/mol. Since kPa = 1000 Pa and g = 1/1000 kg, the two factors of 1000 cancel when he multiplies them together and he can get away with using these units. I recommend always converting to SI units to avoid confusion. Also, note that the symbol for density used in the video is d, which is different from what we have used (ρ, the convention in atmospheric science).

Hey guys how do you solve ideal gas law questions involving density? The key is to have a formula or know how to derive the formula on your own. Remember density is mass over volume. Now, the way that mass is found in the ideal gas law equation is in n because the number of moles is the same as mass over molar mass. So, check this set. I'm going to replace n with mass over molar mass, and then I'm going to rearrange for m over v. I'm going to undo division by molar mass on the other side and then I'm going to undo multiplication by RT and bring my V over. Here's a what I mean. P times the molar mass divided by RT gives me mass over volume. Mass over volume is density and so my equation is density equals pressure times molar mass divided by RT. We can now use this equation to find the density of oxygen at 55 Celsius and a hundred and three kilopascals. So let's do it. The density is pressure that's 103 kilopascals times molar mass for oxygen. That's 32 grams per mole. R, now, I'm going to put my volume in liters and I'm going to put my pressure in kilopascals which means the relevant are that I want is 8.314 liters, kilopascals per mole Kelvin and my temperature in Kelvin is the temperature in Celsius plus 273, which gives me 328 Kelvin. And all of these units should cancel out to give me a density unit. Kelvin cancels of Kelvin per moles cancel / moles kilopascals canceled the scale pascals and left with grams per liter. Let's do this on the calculator 103 times 32 divided 8.314 divided 328. That's 1.21 grams per liter. That may not seem like a lot, but remember you're dealing with the gas here. If you have a 1-liter balloon how much is it actually going to weigh? Probably the amount of the rubber plus like a gram or so. This here is the density of oxygen gas at 55 and 103 kilopascals. This is your density formula in terms of the ideal gas law. Be able to use it. Best of luck!

Solve the following problem on your own. After arriving at your own answer, click on the link to check your work.

Let’s calculate the density of dry air where you live. We will use the Ideal Gas Law and account for the three most abundant gases in the atmosphere: nitrogen, oxygen, and argon. The mole fractions of the gases are 0.78, 0.21, and 0.01, respectively. M is the molar mass of air; M = 0.029 kg mol–1, which is just an average that accounts for the mole fractions of the three gases:

Putting these values into the equation 2.3, we get that the dry air density is 1.1 kg m–3.

What would the density be if the room were filled with helium and not dry air at the same pressure and temperature?

Often in meteorology we use mass-specific gas laws so that we must specify the gas that we are talking about, usually only dry air (N2 + O2 + Ar + CO2 +…) or water vapor (gaseous H2O). We can divide R* by Mi to get a mass-specific gas constant, such as Rd = R*/Mdry air.

Thus, we will use the following form of the Ideal Gas Law for dry air:

Mdry air is 0.02897 kg mol–1, which is the average of the molar masses of the gases in a dry atmosphere computed to four significant figures.

We can do the same procedure for water vapor: 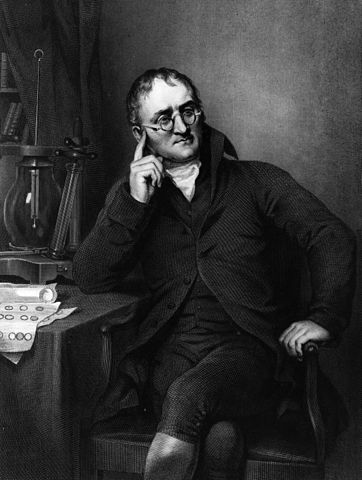 John Dalton
Frontispiece of John Dalton and the Rise of Modern Chemistry by Henry Roscoe. Licensed under Public Domain via Wikimedia Commons

This gas law is used often in meteorology. Applied to the atmosphere, it says that the total pressure is the sum of the partial pressures for dry air and water vapor:

Imagine that we put moist air and an absorbent in a jar and screw the lid on the jar. If we keep the temperature constant as the absorbent pulls water vapor out of the air, the pressure inside the jar will drop to pd. Always keep in mind that when we measure pressure in the atmosphere, we are measuring the total pressure, which includes the partial pressures of dry air and water vapor.

So it follows that the density of dry air and water vapor also add:

[2.8]
Solve the following problem on your own. After arriving at your own answer, click on the link to check your work.

Suppose we have two air parcels that are the same size and have the same pressure and temperature, but one is dry and the other is moist air. Which one is less dense?

We can solve this one without knowing the pressure, temperature, or volume. Let’s assume that 98% of the molecules are dry air, which means the remaining 2% are dry air in the first case and water vapor in second case. Dry air is 0.029 kg mol–1 and water vapor is 0.018 kg mol–1, so 2% of the moist air is lighter than the 2% of dry air, and when we consider the total air, this means that for the same temperature and pressure, moist air is always less dense than dry air.

Suppose there are two air parcels with different temperatures and water vapor amounts but the same pressure. Which one has a lower density? We can calculate the density to determine which one is lighter, but there is another way to do this comparison. Virtual temperature, Tv, is defined as the temperature dry air must have so that its density equals that of ambient moist air. Thus, virtual temperature is a property of the ambient moist air. Because the air density depends on the amount of moisture (for the same pressure and temperature), we have a hard time determining if the air parcel is more or less dense relative to its surroundings, which may have a different temperature and amount of water vapor. It is useful to pretend that the moist parcel is a dry parcel and to account for the difference in density by determining the temperature that the dry parcel would need to have in order to have the same density as the moist air parcel.

We can define the amount of moisture in the air by a quantity called specific humidity, q:

We see that q is just the fraction of water vapor density relative to the total moist air density. Usually q is given in units of g of water vapor per kg of dry air, or g kg–1.

Using the Ideal Gas Law and Dalton’s Law, we can derive the equation for virtual temperature:

Solve the following problem on your own. After arriving at your own answer, click on the link to check your work.

We see that the blob is less dense than its environment and so will rise. This difference of 0.6 oC may seem small, but it makes a huge difference in upward motion.

The following are some mistakes that are commonly made in the above calculations:

We calculate that Tvblob < Tvenv, which is the wrong answer.

We calculate that Tvblob > Tvenv, which is correct in this case, but the numbers are crazy! After you complete your calculations, if the numbers you get just don’t seem right—like these—then you know that you have made a mistake in the calculation. Go looking for the mistake. Don’t submit an answer that makes no sense.

Once we find Tv, we can easily find the density of a moist parcel by using equation [2.5], in which we substitute Tv for T. Thus,

This quiz will give you practice calculating the virtual temperature and density using the Excel workbook that you set up in the last lesson.