The final project will test your ability to make an observation of the atmosphere and to provide an integrated analysis of that observation using the knowledge and quantitative analysis skills that you have learned in this course.

Example of a Final Project for on-line instruction - other examples of residence instruction Powerpoints are given in Canvas. 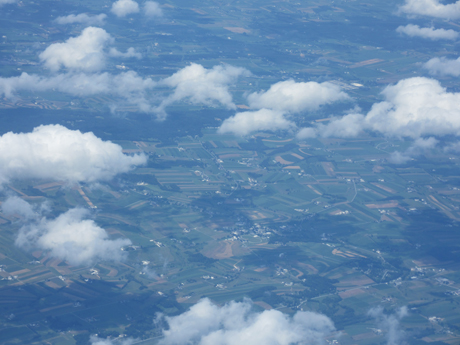 I took this picture of southeastern Pennsylvania while flying to Atlanta, GA on 29 June 2015. The picture was taken at 14:30 EDT (18:30 UTC) from an altitude of about 20 kft. Note the fair weather cumulus clouds have little vertical development. Also, even though it was a fairly moist summer day, the boundary layer below the fair weather cumulus appears quite clear.

The presence of clouds indicates that three conditions existed: moisture, aerosol, and cooling. The moisture came from the surface, which had seen heavy rain a day before. Surface heating by solar visible irradiance  evaporated liquid water on the surface, which created pockets of moist, buoyant air. These air parcels rose relative to the nearby less buoyant environment, according to the Buoyancy Equation [2.66]:

until they reached the lifting condensation level (LCL). There, they became supersaturated, so that the aerosol that forms the cloud condensation nuclei nucleated and cloud drops were formed according to the Koehler Theory Equation [5.13]:

These clouds sat in the entrainment zone just above the convective boundary layer. The energy budget for such a recently wetted land surface would likely show significant downward net radiation, and significant upward latent heat flux.

This condition came about from the synoptic scale conditions, with high pressure over the region (Figure 2) suggesting downward vertical descent and divergence according to Equation [9.5]:

which, by adiabatic compression, would lead to clearing skies.

It is most likely that these clouds in the observation were formed by adiabatic ascent by random localized buoyant air parcels. However, there was a fairly uniform stratus deck just to the northeast of this location and some evidence that this air mass was moving to the west or southwest toward the location (Figure 3).

Figure 3. Visible satellite image for 29 June 2015. Note the breaking cloud cover in the Northeast and the fair weather cumulus over much of Pennsylvania and Maryland.
Credit: NOAA

As this stratus deck was mixed with drier air (Lesson 5.3, Equation [5.4]), the cloud deck could have broken up into evaporating individual clouds. Likely the clouds in the observation were from both adiabatic ascent and the evaporation of the stratus cloud deck.

Often with clear skies the pollution levels are high and the boundary layer is filled with haze. However, the visibility is quite good in the picture. There is generally enough PM2.5 (particle matter less than 2.5 microns in diameter) present in southeastern Pennsylvania. However, rain the previous day was able to remove some of the pollution from previous days, thus clearing the air. In addition, the particles that were there may not have been swollen to a size that efficiently scatters solar radiation, when in Equation [6.17]:

the size of the particles are approximately equal to the visible wavelength. Indeed, we have at least three pieces of evidence that the air was fairly dry (Figure 1, Figure 3, and Figure 4 (Lesson 7)), with dewpoints in the middle-to-high 50s (oF) (see this image).

From the skew-T, the relative humidity was only about 50% (Lesson 3.5, RH = w/ws = 7 g/kg / 14 g/kg). Thus, the recent scavenging of aerosol by heavy rain and the low relative humidity made for great visibility and clear boundary layer air even in the high pressure region, with light winds and clearing skies. This example is interesting because only after frontal passages with rain is the boundary layer air so clear under high pressure. If the high pressure were to persist, then the moisture levels would likely increase due to evaporation of surface water and the pollutant emissions and chemistry would make more particle pollution, both of which would lead to lower visibility in the boundary layer.

Self Evaluation of This Example. Note: This evaluation is given here to show you how the rubic will be used to evaluate your project. You should not include a self-evaluation with your project.

This example meets the overall standards for integration and explanation of the observation. The analysis addresses the presence of the fair weather cumulus and the reason for the clear air in conditions when the visibility is often not so good. On the other hand, my example would not receive a perfect score for a few reasons. First, the choice of observation is good but not very interesting. Second, all of the equations are appropriate, but some are not well integrated into the analysis. Third, some of the figures are fuzzy. And, fourth, the possible evaporation of the stratus deck is not particularly well explained.

For your reference, the grade for this example would likely be 11 to 12 on a scale of 15.

‹ 12.1 An Integrated View of the Atmosphere up 12.3 The Final Comprehensive Examination ›
METEO 300 Fundamentals of Atmospheric Science