8.6 What You Experience Depends on Your Point of View: Eulerian vs. Lagrangian

8.6 What You Experience Depends on Your Point of View: Eulerian vs. Lagrangian 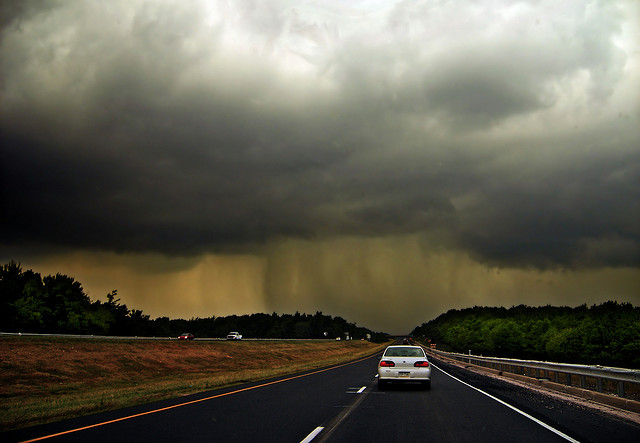 A car travels at the same speed and direction as a thunderstorm
Credit: Nicholas A.Tonelli via flickr

Suppose you were driving underneath an eastward-moving thunderstorm at the same speed and in the same direction as the storm, so that you stayed under it for a few hours. From your point-of-view, it was raining the entire time you were driving. But from the point-of-view of people in the houses you passed, the thunderstorm approached, it rained really hard for twenty minutes, and then stopped raining.

We can now generalize these ideas to any parcel of air, not just a thunderstorm. An air parcel is a blob of air that hangs more-or-less together as it moves through the atmosphere, meaning that its mass and composition are conserved (i.e., not changing) as it moves. It has a fairly uniform composition, temperature, and pressure, and has a defined velocity.

Here's an interesting fact. Radiosonde measurements are considered Eulerian because they measure properties like temperature and humidity at a fixed location. However, the horizontal velocity is measured by a radiosonde’s lateral movement with the horizontal wind and so is actually a Lagrangian measurement. A cup anemometer or sonic anemometer is an example of a Eulerian method of measuring wind velocity.

Discussion Forum 5: Eulerian and Lagrangian Points-of-View From Your Everyday Life

In the lesson, I presented an example of a driver in a car that happened to be traveling at the same speed as a rainstorm so that to the driver it was raining the entire time, while to the observers in the houses that the driver passed, the rain showers were brief. We could have given a second case in which there was widespread rain so that both the car driver and the house occupants observed constant rainfall for several hours. In the first case, the advection exactly matched the local rainfall change wherever the driver was, so that the driver was in rain constantly, but the house occupants saw rain only for a short while. In the second case, there was no gradient in the rainfall rate, so even if the storm was moving, neither the driver nor the house occupants observed a change in rainfall.

This discussion will be worth 3 discussion points. I will use the following rubric to grade your participation:

‹ 8.5 Gradients: How to Find Them up 8.7 Can the Eulerian and Lagrangian frameworks be connected? ›
METEO 300 Fundamentals of Atmospheric Science