Why Storage? What is used for PV?

Due to the advancement in the distributed generation systems for electricity, there is an increased demand for energy storage at both small and large scale applications. As we learned in lesson 1, PV is one of the fastest growing technologies in the electriccal generation market, and in some cases it requires storage systems. In this lesson, we will focus on the complementary energy source that is usually coupled with a PV system, which is the storage system.

Storage is needed in PV systems to overcome the intermittency of the energy generated. These variations could be caused due to daily or monthly solar irradiance fluctuations. Daily fluctuation occurs as a result of the change of solar irradiance within the 24 hour period; while the seasonal (or monthly) fluctuations occur due to the change of solar irradiance across the summer and winter as seen in Figure 3.1. If we observe the monthly energy production of a 1 kW PV system installed in State College, PA, we can see that the generation increases during the summer months while the energy generation drops during the winter months. We can see that the PV system will not generate the same amount of energy each month. This means we need another complementary system to help even out the energy difference throughout the year. 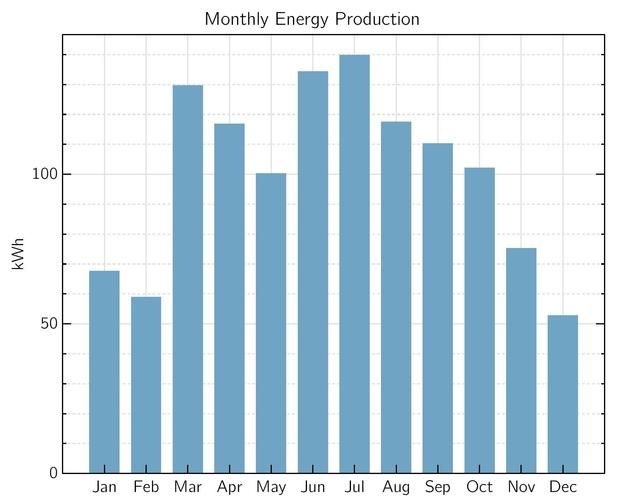 To learn more about the other storage technologies, you can refer to EME 812 (9.1. Options for energy storage).

How do we make an optimal choice of a storage system?

Depending on the desired application intended for a storage system, there are many factors that affect the selection decision. In general, each application requires either more power from the storage system or it may require more energy. In Figure 3.2, the Ragone plot illustrates the power/energy density of various storage technologies. It can be seen that some technologies, such as fuel cells, can generate higher energy density (in wh/kg) than technologies with lower energy density such as capacitors. In other words, fuel cells can supply energy for longer time periods than can capacitors. In contrast, capacitors have higher power density (W/kg) than fuel cells, which means capacitors supply higher power for short periods than do fuel cells. For example, a capacitor is a good choice for high power density requirements, but it is not the optimal choice for high energy density, as we can see in Figure 3.2. 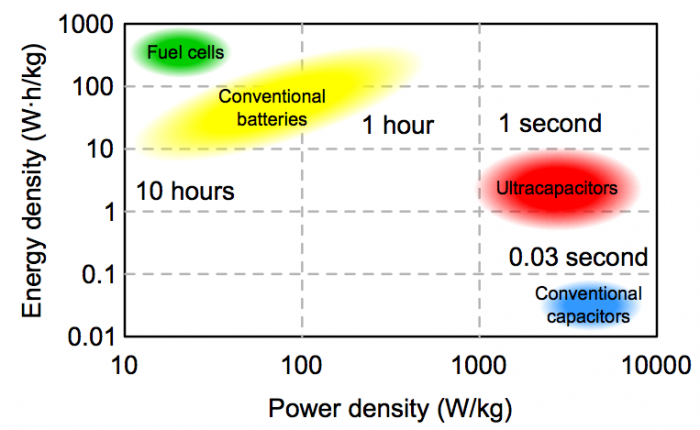 For most solar applications, we need a good balance between both high energy density and a high power density.

Going back to a previous example, can capacitors be a storage option for solar applications?

ANSWER: Due to low energy density, capacitors are not the best match for PV applications.

For short-term to medium-term storage applications, the most common kind of storage technology is the battery system. They exhibit the perfect match between both energy density and power density to meet the daily storage demand for PV systems.

Batteries are still the most reliable, easy to implement, and efficient option for most commercial small to medium PV systems when compared to other technologies such as fluid, compressed air energy storage, or fuel cell.

The next topic will focus on battery technology and its types and operation principles.

‹ Review up Battery Types and Principles ›