Batteries are electrochemical devices that convert chemical energy into electrical energy. Batteries are classified as primary and secondary batteries.

To learn more about battery technologies, you can refer to EME 812 (9.3. Battery storage). (Note: link is also located on the Review page of this Lesson.)

Which battery type is suitable for PV applications? Primary or secondary?

ANSWER: Since PV systems require energy to be stored more repeatedly during the day, we are interested in secondary battery technology.

So how do we compare batteries for best candidate for PV application? 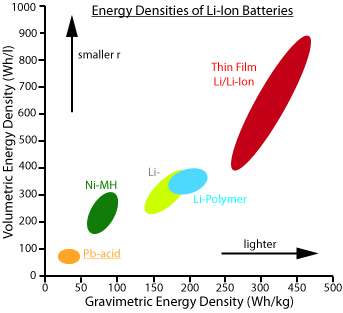 As shown in Figure 3.3, lead-acid shows the lowest volumetric and gravimetric energy densities among the batteries while Li-ion exhibits the best combination.

Since Lithium-ion batteries have the best properties in terms of energy and power density, why isn't it the most widely spread technology for PV applications?

ANSWER: Lithium-ion batteries have ideal material properties to make them an optimal storage choice, but cost is still a major factor that determines the feasibility of Lithium-ion as the best choice for broader PV applications.

That said, let's look a little bit more closely at the lead-acid battery.

Similar to most batteries, the lead-acid battery consists of several individual cells, each of which has a nominal voltage of around 2 V. Lead-acid batteries could have different types of assembly. For example, the common lead-acid battery pack voltage is 12 V, which means 6 cells are connected in series.

When the battery is recharged, the flow of electrons is reversed, as the external circuit doesn't have a load, but a source that has a higher voltage than the battery can enable the reverse reaction. In a PV system, this source is nothing but the PV module or array providing solar power and can charge the battery when the sun is available. As we learned previously in Lesson 1, the use of storage is more common in the stand-alone PV systems, because there is no other source of power to support the PV array when the sun is not available. In other words, the loads are at the mercy of the availability of the sun. In that case, energy storage option such as batteries can be very useful. As an example, a typical daily solar irradiance profile is shown in Figure 3.4. If we observe the orange curve that represents the daily solar irradiance, we can see that a significant amount of energy is generated during the daytime while no energy is generated during the nighttime. On the other hand, the daily energy demand represented in blue curve shows that energy is needed all day long with higher demands at certain time periods. When we put the daily load demand curve (aka daily load profile) on the same figure, we see that a significant energy demand exists when there is no sun. 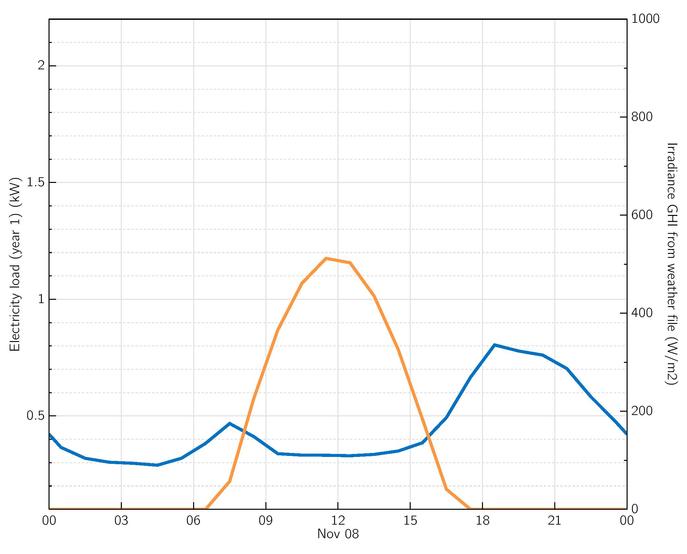 For utility-interactive systems, the excess energy is fed back to the grid while the load demand can be supplied from the grid when the sun is not available.

As for a stand-alone system without storage, even though the sun has more than enough power during the day, the system fails to utilize this excess energy to power the loads when the sun is not available.

With the introduction of battery storage, the excess energy from the sun during the day can be stored in a battery and then used later to meet the load demand when the sun is not available. This is represented in highlighted areas A1 and A2 in Figure 3.5, below, for excess solar power and evening load demand respectively.

The perfect match occurs when area A1 equals to area A2 and that can be accomplished by perfectly sizing the solar PV system to meet the average daily load energy demand. Furthermore, excess solar energy can be stored using Battery systems. 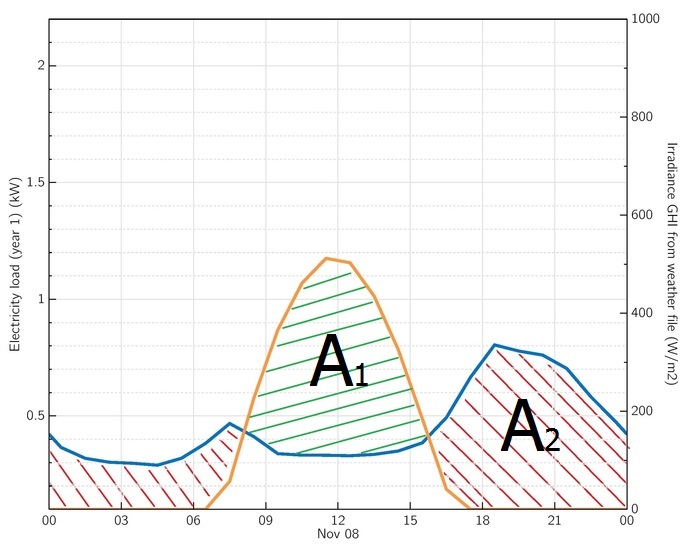 In summary, we have seen different types of battery technologies and discussed why lead-acid is the battery of choice for most current PV systems. We will talk in detail about battery parameters in the next topic. We will also see how managing battery parameters is a whole new optimization challenge on its own.

‹ Why Storage? What is used for PV? up Interpreting Battery Parameters and Specification Sheets ›