Life in the Solar System

You can summarize this lesson with the common phrase, "Are we alone?" You may associate this question with TV shows, movies, or sci-fi novels, but it is a valid question that researchers have considered alongside topics you might consider more traditional, like, "Why does the sun shine?" There is a growing field of study that is investigating all of the scientific questions associated with the search for life in the Universe, and it is referred to as astrobiology. It is part of our everyday experience that life is prevalent on Earth. But what we do not know for certain is how prevalent life may be in the Solar System, the Milky Way, and the Universe in general.

What is astrobiology? We will be discussing many areas of astrobiology during this lesson, but if you want to start with some pre-reading before you begin, I would recommend the NASA Astrobiology website.

The first task to address in the study of life in the Universe is to define what we are looking for. That is, how do you know that something is living when you find it? It is surprisingly difficult to do this, and so there is no single, universally accepted definition of life. If we compare and contrast living and nonliving things on Earth, we can come up with a set of properties that appear to be common among all living things. These are:

We can make this list more detailed, but the difficulty with this type of exercise is that you can find examples of nonliving things (for example, fire is often cited) that exhibit some of the properties of life, and you can cite examples (e.g., viruses) that do not fit all of the properties you expect living things to exhibit. While this question continues to be researched, one option that can be pursued in the meantime is for scientists to look for evidence of life elsewhere that shares properties of lifeforms known on Earth. Clearly, this is an assumption (and one that may be wrong), but for the most part, scientists are looking for evidence that simple, microbial life may be present now, or may have been present in the past on other worlds in our Solar System.

The locations considered most likely to harbor life are:

The reason these locations are considered more likely than, say, Mercury or our Moon, is because there is evidence that each of these worlds either had some liquid on its surface in the past or has subsurface liquid (water in the case of Mars, Europa, and Ganymede, and liquid hydrocarbons in the case of Titan) or on the surface now. This property is considered by many scientists as the single most important requirement for life to exist.

On Mars, we see evidence that liquid water was likely present in the past. Below is an example where scientists believe that the light-colored deposits indicate a brief flow of liquid water that occurred sometime very recently. 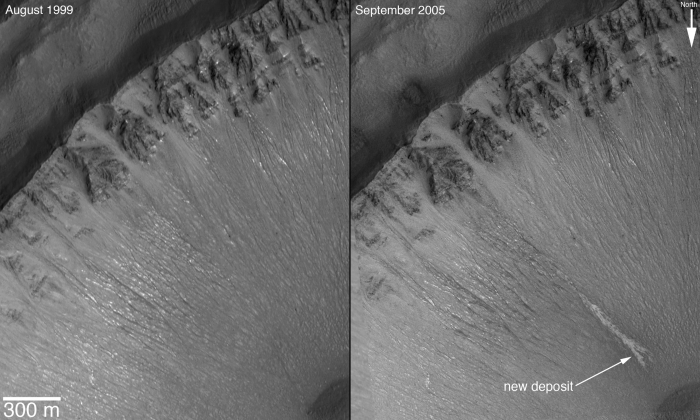 The Mars Phoenix Lander saw water ice in a trench it dug as it was studying the Martian soil. 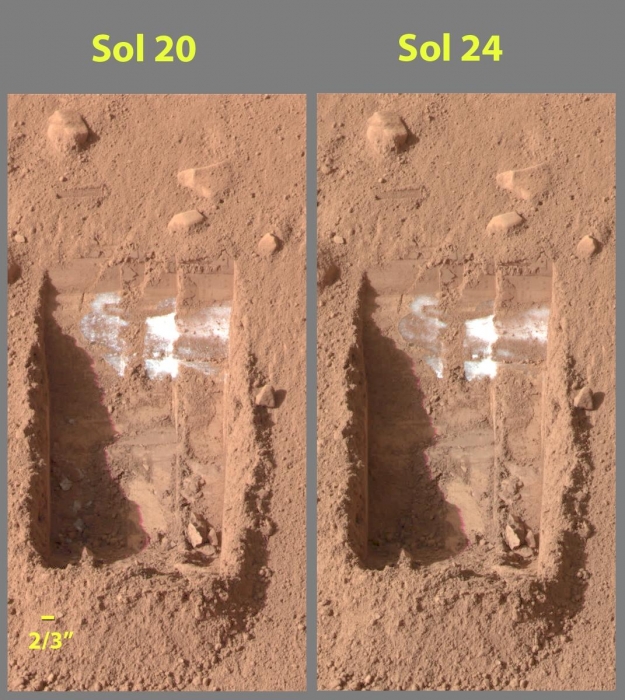 You can find a large number of images and studies of the Martian surface by landers (for example, the Spirit and Opportunity rovers, the Phoenix lander) or orbiters (Mars Global Surveyor, Mars Reconnaissance Orbiter) that suggest that Mars was once a wet world. Given this evidence, NASA has been investing a great deal of time and effort in the study of Mars in a search for life. At the Mars Exploration website, you can find a list of all of the past, present, and future missions to Mars.

The education and outreach group for the Phoenix Mars Mission has put together an excellent resource that compares images of Mars and images of Earth that builds the case that Mars must have been wet in the past.

‹ Overview up The Search for Planets around Other Stars ›
ASTRO 801: Planets, Stars, Galaxies, and the Universe