Is there any other evidence beyond the atmosphere that might indicate a planet is capable of supporting life? Additional requirements that we can place on a star that hosts a planet are:

Because of these two statements, most of the stars that are being searched for life-bearing planets are F, G, K, or M stars. O, B, and most A stars live such short lifetimes that we expect that their planets will not be able to develop complex life forms. For the lower mass stars with longer lifetimes, astronomers define the habitable zone (or HZ) as the region surrounding the star in which water can remain in its liquid state. In the image below, the blue band represents the location of the habitable zone. Notice, as expected, that for low-mass, cool stars the region is closer to the star, and for higher mass, hotter stars, the region is more distant from the star. In this particular illustration, the Earth appears to be precisely in the middle of the habitable zone for the Sun.

Figure 12.5: Habitable zone relative to the size of a star
Credit: Wikipedia

Another visualization of the habitable zone is shown below. The red region is too warm, the blue region too cool, and the green region is just right for liquid water. Because it can be described in this way, sometimes it is referred to as the "Goldilocks Zone," too. 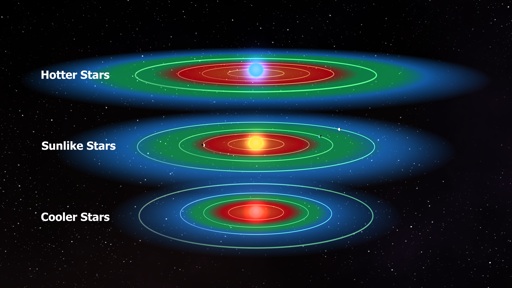 The size of the habitable zone clearly depends on the luminosity of the star, which determines the equilibrium temperature of the planet. However, modern models for the range of the habitable zone take into account more subtle effects, such as the effect of the carbonate-silicate cycle in regulating carbon dioxide in a planet's atmosphere. Work on this particular process by Penn State scientists, including Professor James Kasting, has shown that the habitable zone extends farther from a star than originally assumed. In the case of the Solar System, the Earth is inside of this revised HZ near its inner edge, and Mars is just outside of the outer edge. Our colleague Ravi Kopparapu maintains an up to date visualization of the habitable zone that includes all of the known exoplanets that lie inside their parent's HZ.

When we studied stellar evolution, you saw the evolutionary tracks for stars in the HR diagram: stars do not maintain the same color and luminosity over their entire lifetimes. When the star begins stable hydrogen fusion on the Main Sequence, it will lie in one particular location in the HR diagram, known as the Zero Age Main Sequence, or ZAMS. As the star ages, though, it will, in general, cool off a bit and become more luminous. As its luminosity changes, the location of its habitable zone will change, too. You can define a continuously habitable zone (or CHZ) as the region in which liquid water can exist over the entire Main Sequence lifetime of a star.

One last note about the CHZ. Recall that, in our Solar System, the moons Europa and Titan are considered locations where life may exist. Both moons are far outside of the CHZ around our Sun, though. So, although the CHZ is an interesting location to survey for planets around other stars that might support life, it is not the only location in a planetary system that might support life.

‹ The Search for Planets around Other Stars up The Drake Equation ›
ASTRO 801: Planets, Stars, Galaxies, and the Universe