Today, we are faced with an increasing world population with increasing standards of living, and both trends place considerable pressure on a wide range of natural resources from water to tungsten to timber. This escalation of demand in the face of decreasing availability of resources leads to a natural increase in commodity prices... and therefore, more aggressive exploration. At its most extreme, very low supply with high demand can lead to aggression of a different kind: according to the United Nations Environment Programme, between 1990 and 2009, "...at least eighteen violent conflicts have been fuelled by the exploration of natural resources. In fact, recent research suggests that over the last sixty years, at least forty percent of intrastate conflicts have a link to natural resources" (UNEP, 2009).

Consider the overall trajectory of commodity prices now, as compared to other times of scarcity, namely World War I: 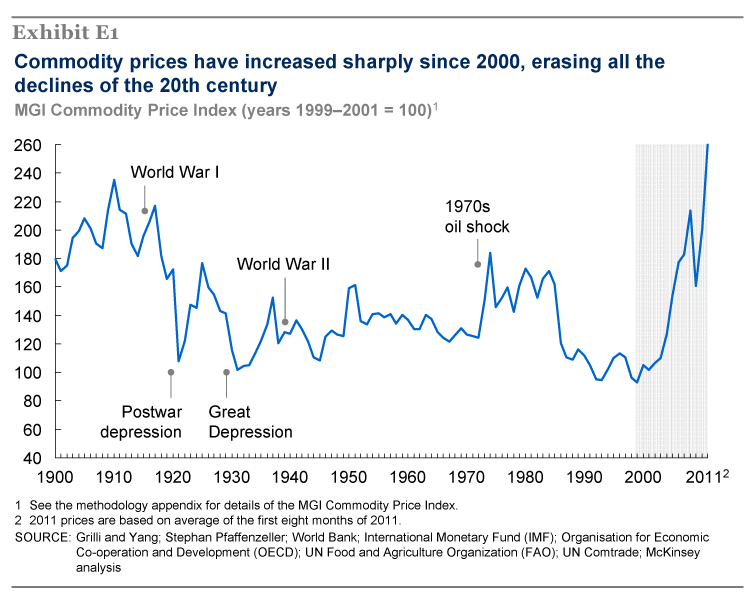 One Economist's View on Scarcity in the Next 20 Years

Commodity demand is being driven by three primary factors: the rising world population, expected to grow from roughly 7 billion today to 9 billion by 2050; increasing global wealth, with an estimated 3 billion people expected to join the ranks of the middle class by 2030; and a marked trend toward urbanization. On the last point, demographers predict that the number of urban dwellers will rise from 3 billion today to 5 billion by 2030, and each of them will demand better quality foodstuffs and modern conveniences that will accelerate the draw on the world’s resources.

On the supply side, however, arable land, potable water, energy, and minerals are finite, scarce and rapidly depleting. Take land—the earth contains approximately 13 billion hectares (32 billion acres) of land, or an area about 16 times the size of the United States. Of that, just 11% (1.4 billion hectares, or 3.5 billion acres) is arable and thus suitable to grow crops. The other 89%—including mountains and deserts—is prohibitively harder to exploit and farm. With the world’s population exploding, many more people will be looking to live and grow food on smaller patches of land.

Then there is water. Although the earth is 70% water, less than 1% is easily accessible fresh water that can be used for the sustenance of life, such as for drinking and sanitation. Meanwhile, by consuming about 85 million barrels of oil a day, we are living off oil discoveries that date as far back as the 1950s. Moreover, environmental concerns about fracking and shale gas could limit their promise so that such alternatives do not offer a real reprieve to global energy woes.

Finally, the global supply of minerals like copper is undermined by a decline in quality, a shrinking number of discoveries, and increased vulnerability to political interventions. Increasingly, companies have to go much farther afield, into more difficult terrain and riskier geopolitical environments, in order to secure these minerals.

Scarcity and the Influence of Subsidies

If you'd like a quick refresher of market equilibrium, check out this great 10 minute video.

It would be a natural response of consumers in a free market to respond to increasing prices by changing their behavior to consume less of the resource or product. If the price of gasoline reaches $3.50/gallon, people will tend to drive less than if gasoline were $1.00/gallon. If the price of electricity increased 500% overnight, people would take a much harder look at LED lighting, improvements to the energy efficiency of their homes, or perhaps invest in down jackets. Regardless of the mitigating behavior, in time, the market would find equilibrium between supply, demand, and price. But, that market balance can be upset in a significant way by subsidies. If there is an "invisible hand" which finds balance and equilibrium of market forces, we can think of subsidies as an "invisible finger" pushing down on one side of the scale. In essence, subsidies distort the balance of markets. If a government subsidizes the price of gasoline, it weakens the price signals which balance supply, demand, and price. This can lead to severe overconsumption of resources.

For decades, governments from Egypt to Indonesia have subsidised the price of basic fuels. Such programmes often start with noble intentions—to keep down the cost of living for the poor or, in the case of oil-producing countries, to provide a visible example of the benefits of carbon wealth—but they have disastrous consequences, wrecking budgets, distorting economies, harming the environment and, on balance, hurting rather than helping the poor.

Emerging markets are not the only places that distort energy markets. America, for instance, suppresses prices by restricting exports. But subsidies are more significant in poorer countries. Of the $500 billion a year the IMF reckons they cost—the equivalent of four times all official foreign aid—half is spent by governments in the Middle East and north Africa, where, on average, it is worth about 20% of government revenues. The proceeds flow overwhelmingly to the car-driving urban elite. In the typical emerging economy the richest fifth of households hoover up 40% of the benefits of fuel subsidies; the poorest fifth get only 7%. But the poorest suffer disproportionately from the distortions that such intervention creates. Egypt spends seven times more on fuel subsidies than on health. Cheap fuel encourages the development of heavy industry rather than the job-rich light manufacturing that offers far more people a route out of poverty.

Below is a Congressional Budget Office view of United States energy subsidies over the past decades. Consider the influence these subsidies may have had in increasing–or decreasing–innovation and natural market balance. In the next lesson, we will explore the relationships between subsidies, greenhouse gas emissions, and carbon taxes.

Credit: Congressional Budget Office. How Much Does the Federal Government Support the Development and Production of Fuels and Energy Technologies?