We all know that building things is more difficult than breaking them. No one could construct a college classroom or a computer or cell phone with just a hammer, but any of them can be broken with a hammer (a big hammer—a wrecking ball—for the classroom). 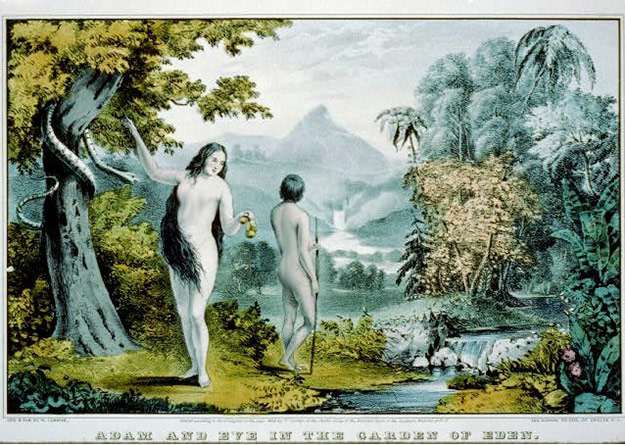 Many traditions include stories of a paradise. In western tradition, this is often the Garden of Eden, as imagined in this 1848 lithograph by N. Currier. Building something good requires getting many things right, but breaking that good thing is almost always much easier.
Source: Library of Congress

By analogy, we see no plausible way that simply raising CO2 in the atmosphere can turn the Earth into Eden, a paradise for all of us. But, the worst possibilities from global warming are rather scary—tropics too hot for unprotected large animals including us, farm fields too hot for our crops to grow, all of the ice sheets melting and raising sea level roughly 200 feet, poison gases belching out of anoxic oceans. We don’t think that any of these are likely, and they would be well into the future if they happened, but even a slight possibility of such outcomes is not balanced by a similar possibility of highly beneficial outcomes.

When faced with similar situations in everyday life, we take extensive precautions. Driving a car includes the slight chance of being killed by a drunk driver, so we use seat belts and put kids in especially safe child seats, buy cars with air bags and crumple zones, pay for road improvements and police surveillance, and support Mothers Against Drunk Driving. If we think that it is unethical to risk hugely damaging events in the future and that instead we should treat climate change like many other aspects of our lives and take out insurance, then more action would be justified now to slow the changes.

The extensive precautions we take in many ways to avoid possible large disasters are consistent with the Precautionary Principle. This is a generalization of the old medical principle “First, do no harm”.

The United Nations Rio Conference put it this way: "In order to protect the environment, the precautionary approach shall be widely applied by States according to their capabilities. Where there are threats of serious or irreversible damage, lack of full scientific certainty shall not be used as a reason for postponing cost-effective measures to prevent environmental degradation.” (United Nations Environment Programme Rio Declaration on Environment and Development, 1992, Principle #15, DocumentID=78&ArticleID=1163).

We discussed earlier how actions have “winners” and “losers”, or at least help one group more than another. Some people have argued that the precautionary principle means that we should slow our changes to the environment until we understand better. But, other people have argued that moving away from fossil fuels might harm the economy, so we should continue with business as usual until we understand better.

In such a situation, one way forward is to assess our experience with similar changes in the past, both environmentally and economically. And, such a comparison suggests that we have successfully negotiated larger economic changes, but have no experience with changes so large in the atmosphere, as discussed next.

Moving Toward the Optimal Path

Looking first at the economics, moving towards the optimal path is often estimated to cost a few months of economic growth over a few decades if you ignore the value of the climate changes avoided, and to improve the economy if you count those changes. Suppose for a moment that all of the climate science proves to be wrong. (Yes, this is a crazy supposition, but just suppose.) If so, then shifting away from fossil fuels is not needed for climatic reasons.

Eventually, the shift still will be needed for supply reasons, so starting to shift now would be an exercise in getting to a sustainable energy system while there is still a fossil-fuel safety net. The fossil fuels not burned would still be there, and could be burned if desired. The economy would have slowed slightly. Some people would have lost jobs, and others gained them. But the big-picture costs of experimenting with a sustainable energy system for a few decades are projected to be small relative to the size of the whole economy.

Governments frequently change their portfolio of taxes and subsidies, so a policy response such as a partial switch from wage taxes to carbon taxes over a few decades would not be far outside of experience. Moving away from fossil fuels would not even lose the technical know-how in the industry, both because serious plans do not envision a complete end to fossil-fuel use releasing CO2 for at least decades, and because most of the skills likely would be needed for geothermal energy or carbon-capture-and-sequestration uses.

The extra costs of running a fully sustainable energy system, with its larger changes than for the economically optimal path, are often estimated as roughly 1% of the economy.

Energy is now about 10% of the economy, so this is an increase in energy costs, but less than some of the oil-price shocks that the economy has experienced in the past. And, this ignores the benefits of slowing and then stopping the warming and other changes from the CO2.

The extra cost of the optimal path, and even of a fully sustainable system, is similar to the extra cost of the modern water-and-sewer sanitary system, as opposed to a minimal system such as existed in London in the days of cholera. Humanity has surely done bigger things, both bad (think of a world war) and good, including building the current energy system. We probably have never agreed to do something this big, but we have muddled through larger changes.

In contrast, atmospheric CO2 is now higher than ever experienced before by modern humans and may be heading for levels not seen in tens or possibly even hundreds of millions of years. Thus, if one subscribes to the precautionary principle, striving first to do no harm, the economic effects of response are well within experience, whereas the climatic effects of failure to respond are well outside of experience. Thus, if you think that the precautionary principle is useful, you probably would recommend more action now to slow fossil-fuel emissions of CO2.

To see a little more on why you might want to take out insurance against disasters, go bungy-jumping with Dr. Alley in New Zealand in this clip.

Click here for a video transcript of "Look Before you Leap".

Narrator: Burning fossil fuel emits black soot and other pollutants that fall out of the atmosphere quite quickly. But it also releases carbon dioxide, which remains in the air much longer, to influence Earth's climate. Richard Alley's ice core research shows that sometimes the Earth experiences abrupt climate changes, known as tipping points. And if we keep on burning fossil fuels without capturing CO2 emissions, we may increase the risk of pushing Earth's climate over the edge. It might be wise to Look Before You Leap.

Richard Alley: The Earth's climate system is usually well-behaved-- a little more Sun, a little more CO2, and we get a predictable amount of warming. This is the pattern of natural variability of the climate our planet has experienced over the past 400 thousand years, as recorded in the physics and chemistry of ice cores. The regular ups and downs in temperature are the result of changes in Earth's orbit around the Sun, and their subsequent effects on levels of carbon dioxide and other heat-trapping gases. You can think of this natural variation as the Ice Age roller coaster. As a geologist, I'm at home in the vast expanses of time. So let's take a ride, cresting hills and rolling through valleys, following the more-or-less regular pattern of changing climate, over hundreds of thousands of years. Here we're down at 180 parts per million of CO2 and in an Ice Age. Now we're climbing to 280 parts per million, a warmer interglacial period. Then down to a cold 180 and up again, to a warmer 280. Then repeating 180-280, the natural cycling of the climate roller coaster. But if we look in greater detail at 100,000 years of Earth history, and specifically at the ice core record from Greenland, it's obvious our planet's climate hasn't always had smooth ups and downs. Occasionally, we cross some sort of a tipping point, and the Earth evolves really rapidly to a new state which is very different.

Over the last 100,000 years of the Ice Age cycling, we've had a couple of dozen of these large, abrupt, widespread climate shifts, almost as if the Earth was bungy-jumping off the climate roller coaster. Of course, you'd have to be a little nuts to bungy off a roller coaster. Which is why I'm leaving this to my computer avatar. But these abrupt climate changes are real. Here's one of the largest and most recent. About 13,000 years ago, as the Earth was climbing out of the last Ice Age, the North passed a tipping point and rapidly slid back into a cold millennium-- drying monsoon regions of Asia where huge populations now rely on rain and warming the South. There were weather and climate disruptions worldwide. But then, another tipping point was reached, and in ten years or so, temperatures in Greenland rose by about 10 degrees Centigrade, 18 Fahrenheit-- numbers we know with high confidence from the ice core record. Today, whatever climate model we use to project the impact of rising levels of CO2, you see a relatively smooth curve, heading upward, but in principle a change we could adapt to. But Earth's history shows us that Earth's climate doesn't always work this way. Sometimes it really does get as crazy and unpredictable as bungy jumping off the climate roller coaster.

An abrupt climate change could be really bad for people. We're optimistic that we won't have one, but we're not certain. And the science suggests that the harder and faster we turn the CO2 knob, the more likely we are to cross a tipping point and trigger one. Yet here we are today, racing up a hill to who knows where. As burning fossil fuels means we've blown past 390 parts per million, without slowing down. Will our ascent be smooth and manageable? Or will our ride come off the rails? If we wanted to take out insurance against the possibility of such a change, we could look at slowing down now before we tip over the edge.