You can think of energy in the Earth’s climate in a way that is similar to the materials entering and leaving the car factory. Almost all the energy for the Earth system comes from the Sun. About 30% of this is reflected from clouds and the land surface and the other 70% is absorbed and heats the Earth. (The reflected fraction is called the “albedo”, so we say that the Earth’s albedo is about 30%. We don’t worry much about the heat coming up from the deep Earth because it is almost 4000 times smaller than the absorbed heat from the sun.)energy

You know that when the sun rises in the morning, the temperature in the air can go up a lot, quickly. If all of the Sun’s energy stayed on Earth, everyone would be dead from overheating in much less than a year.

But, warmer things lose energy to colder things. Suppose you turn on an electric stove. As the temperature of the heating element (the “burner”) rises, it begins to heat the pot of water on top to boil the water for your spaghetti. If there isn’t a pot of water on top, you can see the burner begin to glow, radiating energy. 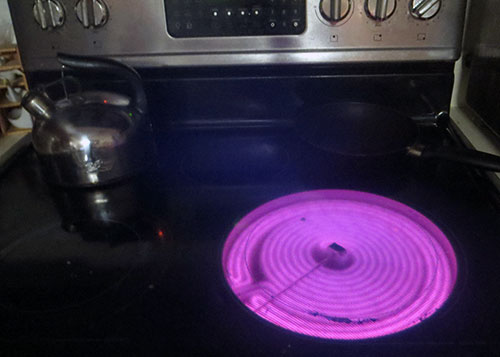 This stove burner is actually reddish, but looks purple because of a fancy easy-to-clean stove top
Photo Credit: Richard B. Alley

The burner is “glowing” even before you can see the glow, as you could prove to yourself if you watched it while wearing special glasses that can “see” in the infrared, which is a longer wavelength of energy than visible light. As the burner gets hotter, it radiates more energy. And, while it continues to radiate long wavelengths such as the infrared you can’t see, a hotter burner shifts more of its energy to shorter wavelengths you can see, going to red and then orange and yellow as it warms up.

If you keep giving the burner the same amount of energy, its temperature will increase until the outgoing and incoming energy are equal, and then the temperature will stabilize. If you then supply energy more rapidly, the burner will warm to a new level that radiates the extra energy. Always, the burner tends to that temperature at which incoming and outgoing energy are equal, a balance like the stuff going into and out of the factory. But, electricity comes in and electromagnetic radiation goes out, much the way car parts go in and cars come out of the factory.

For the Earth, energy from the very hot Sun comes in, mostly in the short wavelengths of light we can see, and we send back infrared radiation at longer wavelengths. But on average, the total amount of energy going out is just about the same as the total coming in. At the present time, this incoming and outgoing energy is not exactly equal — a bit less is leaving, which means that the Earth is warming.

‹ The Unavoidable Warmness of Burning up Potholes ›