Because warmer things begin to radiate more energy very quickly, the Earth’s climate is very strongly stabilized, as noted in The Simplest Climate Model. Other processes may stabilize the Earth system by reducing changes or destabilize by amplifying changes.

Some stabilizers can be very important but tend to be very slow. We saw in the last chapter that warming reduces oxygen in the ocean, which makes the burial of organic matter easier. And, because the organic matter grew from carbon dioxide in the air, burying rather than burning the dead bugs lowers atmospheric carbon dioxide. Thus, if something such as a brighter Sun causes warming, fossil-fuel formation reduces the size of the warming. However, we also saw that fossil-fuel formation is a slow process because most plants are still “burned” by bacteria or living things; fossil-fuel formation can be very important over a few hundred thousand years or longer, but not over a few thousand years.

Some carbon dioxide is also picked up from the air by rain, forming a weak acid that breaks down rocks in a process called “weathering”, because the weather is involved. The chemicals released from the rocks are used to make shells, some of which contain carbon dioxide. (A coral reef or a clamshell is calcium carbonate, usually written as CaCO3, but sometimes written as CaO•CO2, showing more clearly that it contains carbon dioxide.) Chemists use Bunsen burners in their labs for good reasons; warming almost always makes chemical reactions go faster. So, if the temperature goes up, chemistry removes carbon dioxide from the atmosphere more rapidly. If something such as a brighter sun raises the Earth’s temperature, this “rock weathering feedback” can remove enough carbon dioxide to cool the climate back close to the starting temperature in approximately ½ million years. 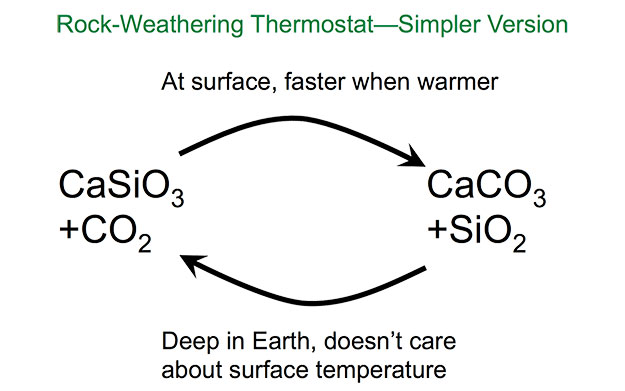 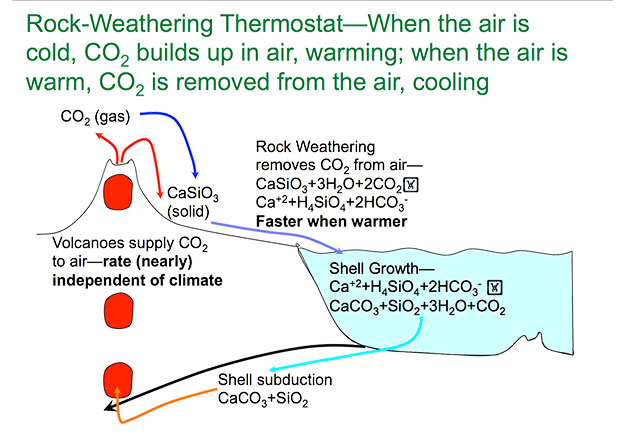 Rock Weathering Thermostat Diagram-more complex. The rock-weathering feedback stabilizes the Earth’s temperature over about ½ million years. The really really simple version and the simple version are shown here and should give you the basic idea.
Click the link to expand for a text description of Rock Weathering Figure

Rock-weathering Thermostat-When the air is cold, CO2 builds up in the air, warming; when the air is warm, CO2 is removed from the air, cooling. Volcanoes supply CO2 to air—rate is (nearly) independent of climate, and solid CaSiO3. Rock weathering remove CO2 from air— CaSiO3 + 3H2O+ 2 CO2 becomes Ca2+ +H4SiO4 +2HCO3- . This process works faster when it’s warmer. The products from the previous reaction fall into a body of water where shell growth occurs. The equation for this is Ca2+ +H4SiO4 + 2HCO3- becomes CaCO3 + SiO2 + 3H2O + CO2 .  CaCO3 and SiO2 undergo shell subduction, which feeds back into the volcano. Other products are released into the ground

Source: Diagrams by Dr. Richard Alley are based on Walker, J.C.G., P.B. Hays and J.F. Kasting, 1981, A negative feedback mechanism for the long-term stabilization of Earth’s surface temperature, Journal of Geophysical Research 86(C10), 9776-9782. 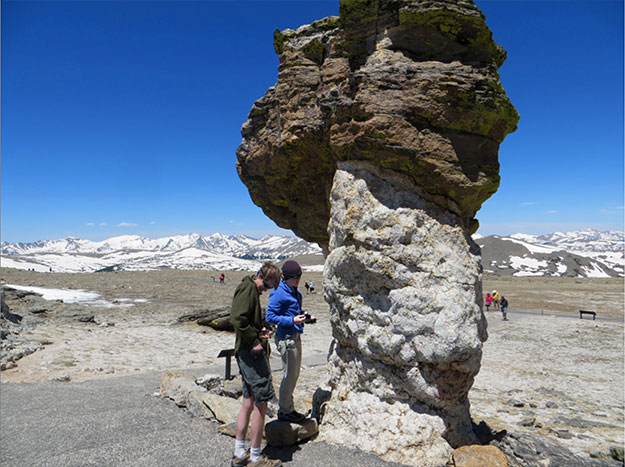 Evidence of rock weathering, Rocky Mountain National Park, Colorado, USA. Processes near the Earth’s surface, usually involving weather somehow and thus called weathering, break down rocks to make soil and dissolved materials, which eventually are washed to the sea. You are not responsible for these details, but… the picture shows Karen Alley and Alex Crawford inspecting the evidence of some weathering, high on the tundra in the Rocky Mountains. Deep in the mountain range, some rocks were heated almost but not quite high enough to melt (the dark rock on top, a schist), and then these rocks were cracked as melted rock squirted in before “freezing” (the light rock below, a pegmatite). Erosion then removed the rocks above, so these rocks eventually reached the surface and were naturally carved into the isolated pillar we see now, where once there were continuous layers. The pegmatite is more easily weathered in this climate, so more of it has been removed to make soil, leaving this mushroom shape.
Photo Credit: Richard B. Alley

The Earth's climate is a complex system, and like most other complex systems, it is, partially controlled by many feedbacks. Feedbacks can affect many things. If we think about temperature, if a warming or cooling affects other processes that in turn change the temperature, those other processes are called feedbacks. A feedback that works against the initial temperature change to reduce its size is said to be stabilizing or negative; a feedback that increases the size of the initial change is amplifying or positive. The most important stabilizing feedbacks for Earth’s temperature are the almost instantaneous increase in radiation leaving the planet when the temperature rises, and the faster removal of carbon dioxide from warmer air to form shells and fossil fuels over hundreds of thousands of years.

At the in-between times, however, the most important feedbacks are positive. As a result, climate changes over years to millennia can be almost as large as changes over much longer times.

Want to learn more?
Read the Enrichment titled Carbon Dioxide is more Important than Water Vapor as a Greenhouse Gas.

The air doesn’t know why it is warm, so anything that warms the air—brighter sun, or more greenhouse gas, or alien ray guns—will increase evaporation from the ocean, amplifying the warming.

Note that this does NOT mean that the warming “runs away” and the Earth burns up, but just that the total warming is made larger by the feedback. Suppose the sun becomes enough brighter to warm the planet by 1 degree, based on the simplest climate model in the Enrichment, which doesn’t include the water-vapor feedback. Including the effects of the extra water vapor would increase warming to almost 2 degrees.

Another important feedback is linked to snow and ice. Most surfaces (forests, grasslands, cities, oceans, even deserts) absorb most of the sunshine that reaches them, but snow and ice reflect most of the sunshine reaching them. Warming melts snow and ice, causing the Earth to absorb more sunshine, which causes more warming. This ice-albedo feedback is not nearly as strong as the water vapor feedback under modern Earth conditions, because most of the snow and ice occur in places and at times without a lot of sunshine (mostly in the winter, near the poles, and often under clouds that already are reflecting the sunshine; note that this feedback would be much more important if the temperature were cold enough for the ice to extend near the equator). 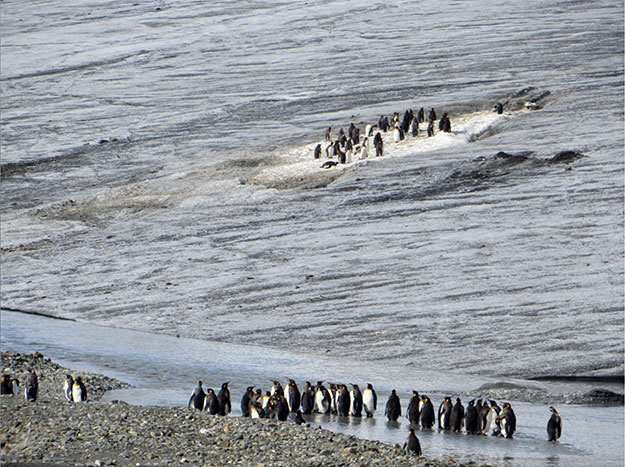 This photo of Heaney Glacier, South Georgia Island in the subantarctic Atlantic Ocean, shows important parts of the ice-albedo feedback. The upper group of penguins is standing on a patch of old snow that accumulated in a little hollow in the glacier ice that surrounds them, while the penguins at the bottom are cooling their feet in a meltwater stream next to rocks that were recently under the glacier, which is shrinking in response to climatic warming. The old snow is whiter and reflects more of the incoming sunlight than the glacier ice, and the ice reflects more sun than the rocks do. Fresh snow reflects even more than old snow. As warming occurs and snow melts, more sunshine is absorbed, causing more warming and more melting.
Photo Credit: Richard B. Alley 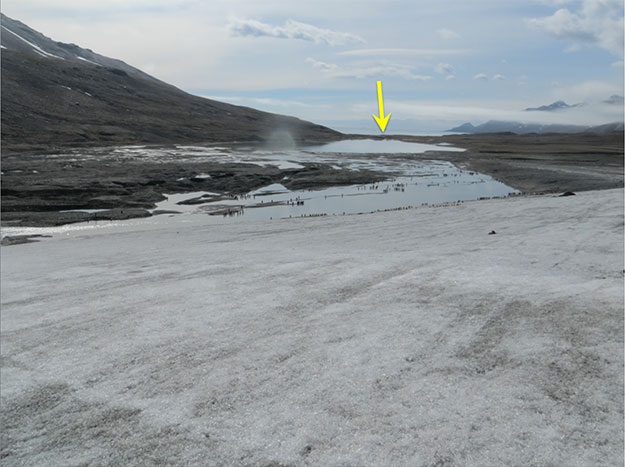 Photo taken by Dr. Richard B. Alley on the Heaney Glacier, not far from the penguins in the previous picture, looking down the valley toward the coast. The glacier reached to near the tip of the yellow arrow around 1920, and most of the retreat has occurred since 1980, exposing the darker rocks that now absorb more sunshine, amplifying the warming. The water looks highly reflective from this angle, but when viewed from above, where the most sunshine comes from, the water is dark, too.
Photo Credit: Richard B. Alley

But, the water-vapor and ice-albedo feedbacks interact with each other. If the sun becomes brighter or carbon dioxide is increased by fossil-fuel burning, the resulting warming melts snow and ice and picks up more water vapor. Each of these causes more warming. But, the warming from the extra water vapor also melts some snow and ice, and the warming from loss of snow causes more water vapor to be picked up. Under modern Earth conditions, this still doesn’t “run away”, but it amplifies the warming still more. (The warming did “run away” on Venus, evaporating the oceans and causing the surface today to be hot enough to melt the metal lead; and such a fate awaits Earth most of a billion years in the future as the sun slowly brightens, although if we hang around and keep learning, we could “geoengineer” our way out of the problem, perhaps using techniques that will be discussed later in the course.)

The best current estimate is that, including changes in vegetation and clouds as well as snow and water vapor, doubling the concentration of carbon dioxide in the air and letting the climate come into balance will cause a warming of roughly 3°C, with fairly high confidence that the number is not less than 1.5°C or more than 4.5°C (or, a most-likely warming of 5.4°F, with the range of possibilities primarily between 2.7°F to 8.1°F). This number is usually called climate sensitivity and is widely discussed in climate science. Of the roughly 3°C warming from doubled CO2, the direct effect of the carbon dioxide on Earth’s radiation is just over 1°C (roughly 2°F), with the rest coming from the positive feedbacks. The stabilizing effect of warmer bodies radiating more energy is included here. Some additional amplifiers are omitted (melting of seasonal snow and sea ice are included, but not melting of the Greenland and Antarctic ice sheets, for example), so over many centuries or millennia, the warming may be somewhat larger than 3°C. The very slow stabilizers are also omitted, but they do not become important until even further into the future. Despite hopes that the climate sensitivity might be low, the most recent studies have made it less and less likely that sensitivity is as low as 1.5-2oC (2.7-3.6oF), with a value close to 3oC (5.4oF) looking fairly likely.