This brief video from National Geographic describes the basics of flooding.

Click here for a transcript of the Floods 101 video.

Narrator: Over the past hundred years, no other natural disaster in the US has caused more death and destruction than floods. They can happen any place, any day, any time. And they will likely only get worse. As people cluster around coastal regions and flood plains, our growing population will confront the awesome power of water.  For thousands of years, farmers have depended on seasonal floods. The waters irrigated their crops and fertilized their lands. Today, excess water is channeled into reservoirs and power hydroelectric dams. But when water levels rise suddenly, far more than the ground can absorb, a flood occurs. Flash floods are a perfect example. Sudden storms unleash a torrential downpour. The runoff moves with surprising force. At a depth of two feet, the water can push aside a car. In fact, half of all deaths from flash floods involve vehicles. But floods occur in many other ways. Heavy rains and thawing snow fall can overwhelm rivers. Storm surge is caused by hurricanes and tsunamis inundate the coastline. Landslides and mudflows can displace large volumes of water. Dams break, levees fail.

In the Great Mississippi Flood of 1993, several of these factors came into play. Over 10,000 square miles of the midwestern United States were overwhelmed with rain. In a cruel twist, the earthen dams known as levees. along the Upper Mississippi River, forced the water to flow downstream faster and stronger. Communities further downriver were hit with the full brunt of the Mississippi. Two-thirds of all the levees were breached. Though towns rallied to protect their lives and livelihoods, the damage was still immense. Over ten billion dollars in damages, 56,000 homes flooded or destroyed, and some 50 people were killed.

At the start of this century, another powerful flood wreaked havoc, this one coming from the sea. The storm surges of Hurricane Katrina submerged 80% of the city of New Orleans. Over 1,800 people died in the floods. The damage has been estimated at over eighty billion dollars. In some ways, the New Orleans disaster was unique. Much of the city lies below sea level and despite years of warning, the city was woefully unprepared to handle a breach of the levees which kept it dry. But we are still vulnerable. Sea levels may rise, coastlines could erode, rain patterns might change, snowpacks could melt, and then the waters would rush in.

Floods are rare events in which a body of water temporarily covers land that is normally dry. Following from module 3, we will mostly restrict our discussion to floods in rivers, but it is important to note that floods also occur around lakes, wetlands, and the sea coast. Indeed, coastal storm surge is among the most dangerous natural disasters expected to result from global warming and sea level rise. River floods occur naturally and in many cases are beneficial for ecosystem functioning because they allow the river to exchange water, sediment, and nutrients with the floodplain and cause scour and deposition that provides habitat for a wide range of aquatic and riparian organisms. However, floods often threaten human infrastructure and livelihoods and can cause severe economic damages.

River floods are typically caused by excessive rainfall and/or sudden melting of snow and ice. Most rivers overflow their banks with small floods about once every two years. Such are the floods that tend to determine the width and depth of a river channel, as discussed in module 3. Moderate floods might occur once every five to ten years and very large floods might only occur once in fifty or a hundred years. The average time period over which a flood of a particular magnitude occurs is called that flood’s recurrence interval, or return period. For example, the very large flood that only occurs, on average, once in a hundred years has a 100-year recurrence interval and is therefore called the 100-year flood. Relating this notion of recurrence interval to the section on probability, above, the recurrence interval is simply the reciprocal of the probability associated with an event (i.e., T = 1/p, where T is the recurrence interval and p is the probability that such an event will occur (or be exceeded), as computed by integrating under the dashed line shown in Figure 4, above the event magnitude of interest). The probability of a 100-year event occurring in any given year is 0.01, or 1%.

We should pay careful attention to our terms here. Note that we are talking about the average time period expected between events. Just because a 100-year event happened last year, there is nothing that says it cannot happen again this year. In fact, the probability of two 100 year floods occurring in back-to-back years is 0.01 times 0.01, or 0.0001. This suggests that, if everything stays the same, the 100-year event should happen in back-to-back years about once every 10,000 years. Of course, over 10,000 year time periods most things don’t stay the same. We’ll discuss this issue, termed non-stationarity, towards the end of the module.

Flash floods are typically caused by heavy rains falling on soils that are already wet or frozen (and therefore have limited capacity to absorb more water), or on land that is covered by snow (in which case the frozen soil has limited capacity to absorb water and the situation is compounded by the fact that melting snow adds to the runoff). Flash floods allow very little time for people downstream to be warned and are therefore especially dangerous. For example, flash floods caused by excessive rainfall from Tropical Storm Washi in the Philippines in December 2011 killed over 1200 people and caused tens of millions of dollars in damages.

Expansion of urban areas can increase the frequency, magnitude, and flashiness of floods. Impervious surfaces (roads, parking lots, and buildings) route precipitation directly to stream channels and prevent draining of water slowly through soils to groundwater (Figure 5). The term flashiness refers to the rate at which the water levels rise and fall with faster rising and falling water levels considered flashier. 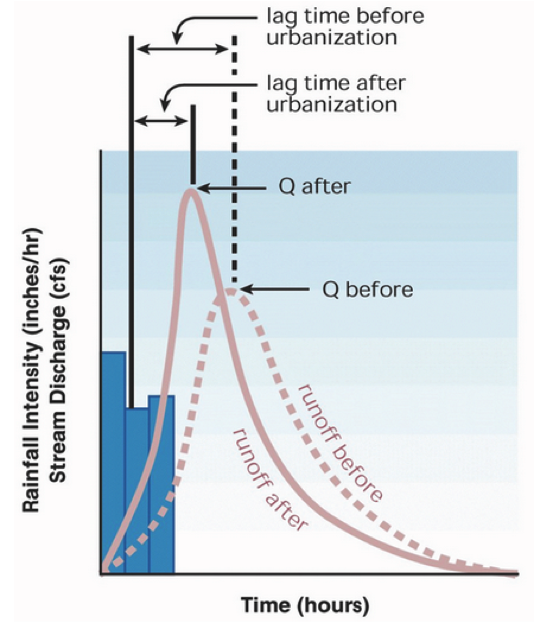 Figure 5. A hypothetical example to illustrate how urbanization may change the timing and magnitude of floods. Specifically, the peak discharge from a given precipitation event (blue bars) is higher and occurs earlier after urbanization. Often the total amount of runoff (which could be computed by integrating under each curve) is also higher after urbanization because there is less soil and vegetation to absorb precipitation.
Source: Image from the Federal Interagency Stream Restoration Working Group, 1998.
‹ Normal Versus Extreme Hydrologic Events up Hydrologic Versus Hydro-Geomorphic Perspectives ›
Earth 111: Water: Science and Society