In this activity, you will explore the relationship between known impact events and sudden extinctions on Earth. Want to see a hand sample from an impact crater? Here is a piece of rock from the Vredefort structure in South Africa. The Vredefort is so big that you can't even see across it. The extreme heat of impact created glassy flow bands in the rocks of the crater ring. That's the black part in the photo. It's a little easier to see in the outcrop scale, but it's still cool! 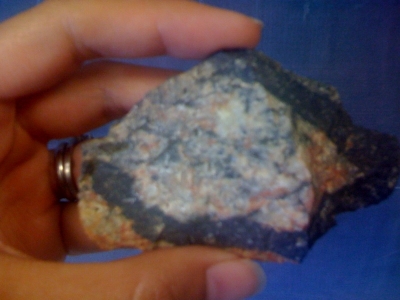 The world map shown in this screencast comes from the impact crater database maintained by the University of New Brunswick's Planetary and Space Science Centre. It shows the locations of known impact crater sites (noted as white dots on the map). In this screencast, I explain the map in more detail. You can also read a transcript of my discussion of the map. 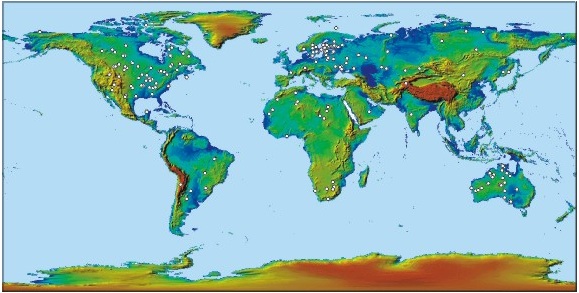 As discussed in the screencast, it is instructive to see where craters are and are not found on Earth. For example, craters are conspicuously absent from the oceans, Antarctica, Greenland, the Amazon river basin, central Africa, and Indonesia. Is this real (i.e., is there a scientific reason why asteroids or comets would fall to Earth in certain locations?) or is this an artifact? The reason why craters are not found uniformly over the globe is a result of preferential preservation in some places and also some places on the planet are not as easy to get to, thus potential impact sites have not been explored there.

In the case of the oceans, plate tectonic activity means that the oldest ocean crust dates from the Jurassic, so no impacts older than that could be found there. In addition, oceanic crust is quite thin and not conducive to preserving evidence of an impact.

For this problem set, create your own document instead of downloading a worksheet.

Your completed problem set should include your timescale, your scatter plot of crater diameter vs. age and answers to the follow-up questions. Save an electronic version of your work in the following format:

Upload your document to the Impact craters problem set assignment in Canvas by the end of week 3 of this lesson.

I'll use my to grade this assignment.

‹ Exploring a Controversial Theory up Recovering From an Extinction ›
EARTH 501: Controversies in the Earth Sciences