The mass extinction event that occurred about 65 million years ago brought about an end to the domination of the planet by reptiles and, in so doing, opened up ecological niches within which mammals flourished several million years later (including, happily, human beings!). 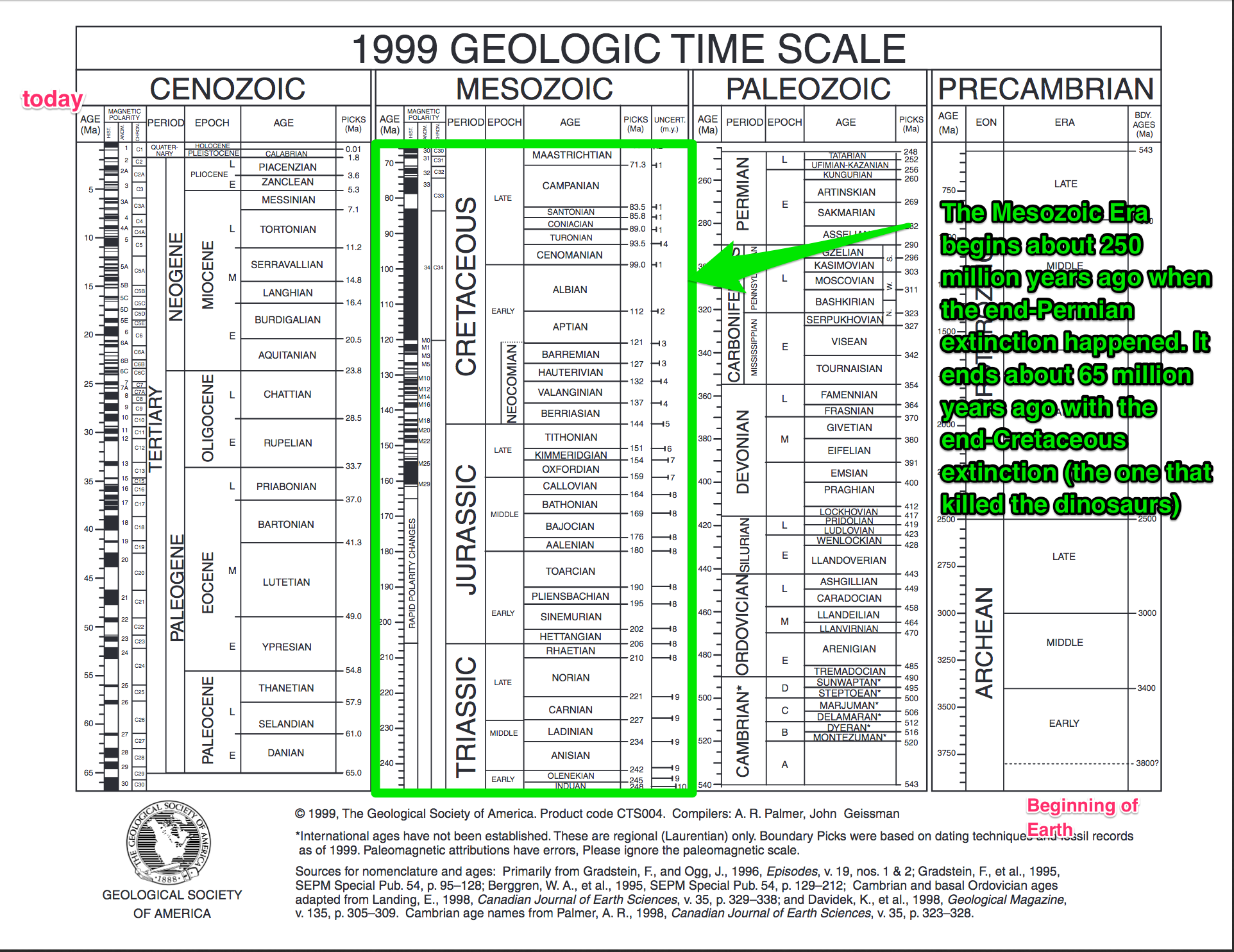 Evidence for an impact at the K/T boundary

History of the impact theory as the cause of the Cretaceous/Tertiary extinction 65 million years ago begins in the Italian town of Gubbio (green arrow in the map below). 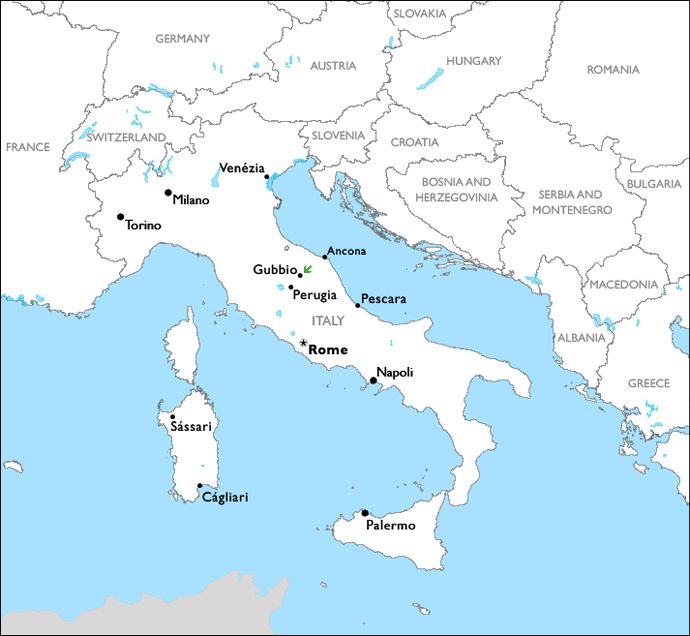 The rock sequence preserved in a gorge outside of Gubbio preserves the transition between the Cretaceous and Tertiary periods. The site was visited by geologists conducting paleomagnetic surveys used to make precise dates of geologic horizons. These workers had noticed that while the lower beds of the Cretaceous contained many fossils, the Tertiary beds above the boundary were surprisingly depleted in fossils. There was a thin layer of clay at the boundary, which turned out to have an extremely high concentration of iridium. Iridium does occur in the Earth's crust but the concentration of it in this layer was so high that either the layer must have been deposited over a very long period of time in a way that concentrated the iridium, or else this iridium must have been delivered to Earth all at once from an extraterrestrial source. Precise dates from paleomagnetic data on the beds above and below the clay layer eliminated the possibility that the clay was just a thin feature representing a very long time, so an extraterrestrial source was hypothesized by a team of scientists led by Luis Alvarez and his son Walter Alvarez. We'll read their 1980 paper in Science that outlines their theory. (Alvarez, L., et al., 1980, Extraterrestrial Cause for the Cretaceous-Tertiary Extinction, Science 208, p 1095-1108.) Since this discovery, iridium-rich clay layers have been found at the K/T boundary in rocks all over the world, making the hypothesis for a planet-wide ecological catastrophe caused by an asteroid or comet impact much stronger. 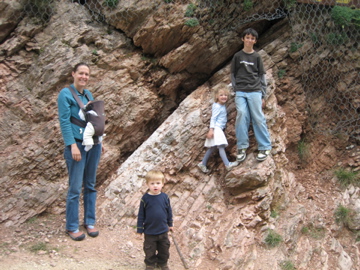 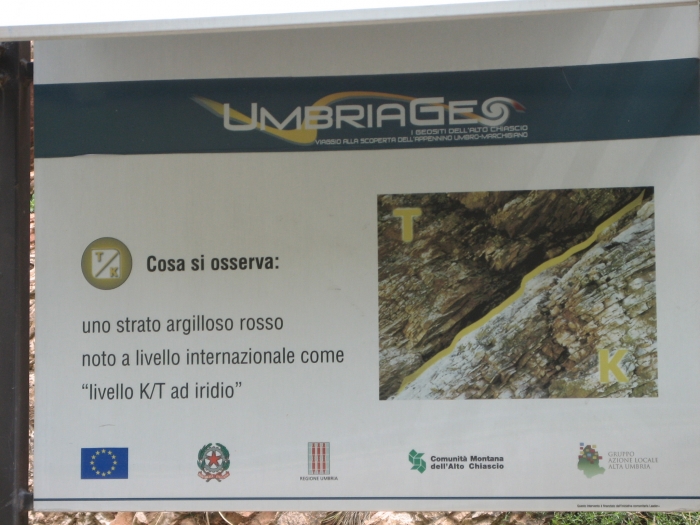 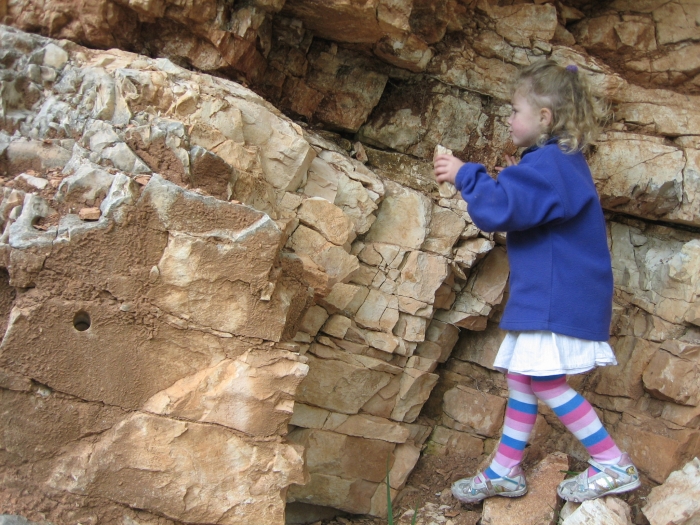 Where did the impact occur?

Other evidence of an extraterrestrial impact from the Cretaceous/Tertiary boundary rocks includes tektites, which are glassy spherules of melt ejected from the crater, and shocked quartz, a form of high-pressure quartz only found at other known meteorite impact craters on Earth. The photo below shows tektites from the K/T boundary in Haiti. 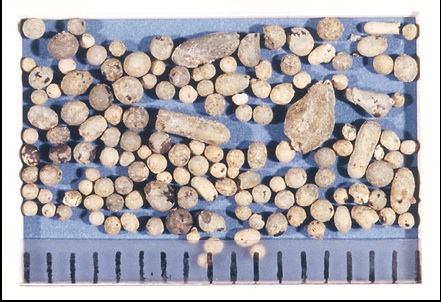 Figure 3.11: Altered impact melt spherules from the K/T boundary sediments in Haiti. These objects form a bed nearly half a meter thick, which is covered by a second, iridium-rich bed. The scale along the bottom of the photograph has 1mm divisions.
Source: The University of Arizona

Tektites and shocked quartz are found in K/T boundary rocks all over the Earth, but the concentrations of them in rocks around the Gulf of Mexico narrowed the search for the crater to that area. Calculations based on the amount of iridium in the boundary clay gave scientists an estimate of the size of the crater they were looking for. About 15 years ago scientists "found" the Chicxulub crater in the Yucatan peninsula and began a drilling project there to date the crater. I wrote "found" in quotation marks because this crater's existence was known in the oil industry for some time, but the idea that it could be the K/T crater was not thought of until the early 1990s. The 1992 Swisher et al. paper in Science that we will read as part of the reading assignment for this section of this lesson details the age-dating of this crater and other evidence to support Chicxulub as the site of the K/T impact. 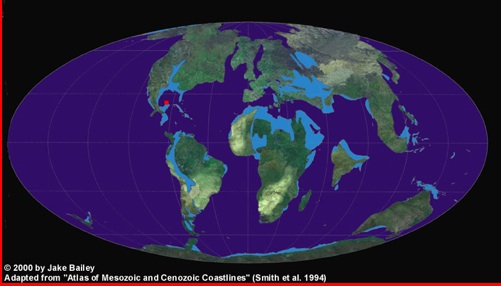 Figure 3.12: A paleogeographic reconstruction of the continents at 65 million years ago showing the impact location in red and the continents submerged at the time in light blue. Mean sea level was not the same as it is at present.
Source: The University of Arizona

Do all scientists believe the impact theory?

Well, what would the fun of that be? The majority of Earth scientists do agree with the Alvarez impact hypothesis because so many lines of evidence support it. However, there are some other fairly catastrophic events that happened on the planet at about 65 Ma, making for an odd coincidence at the very least. For example, the flood basalts of the Deccan Traps in India spewed out at about 65 million years ago. Such extensive volcanism would no doubt have altered the climate seriously. Would that have been enough to cause a mass extinction event? Plenty of geologists think so. It is safe to say a significant number of geologists who work in this field think that there was a sequence of events that led to the end-Cretaceous extinction event, with the asteroid impact being one of them.

‹ Antipodes and Geologic Time up The K/T Extinction Reading Assignment ›
EARTH 501: Controversies in the Earth Sciences