Earlier in this lesson, we discussed transmission congestion and Locational Marginal Prices. As you can see in Figure 2. LMPs are highly volatile. They are calculated at thousands of different locations and change almost constantly. You may also notice that the difference between LMPs at various locations is also volatile. Sometimes the price at one node is higher than at another node, and sometimes it is lower.

Locational or "basis" risk pertains to volatility in the LMP across space (between two or more locations); Risk associated with variation of the transmission price between two nodes or zones. This is the same thing as variation in the difference between two LMPs or zonal prices. Locational risk is sometimes referred to as “basis risk” in the electricity industry.

These two types of risk may need to be managed through various hedging instruments but they also may represent arbitrage opportunities.

The second mechanism for exercising arbitrage is through the "spark spread," which is the difference between the electricity price and the cost of generating electricity, which is mainly the fuel cost. The arbitrage opportunity that the spark spread represents is typically the opportunity to buy fuel and sell electricity. Spark spreads in financial markets are typically defined as the difference between the LMP and the cost of producing electricity by a natural gas generator with certain characteristics (like a heat rate of 10,000 and variable O&M costs of $2.50 per MWh). 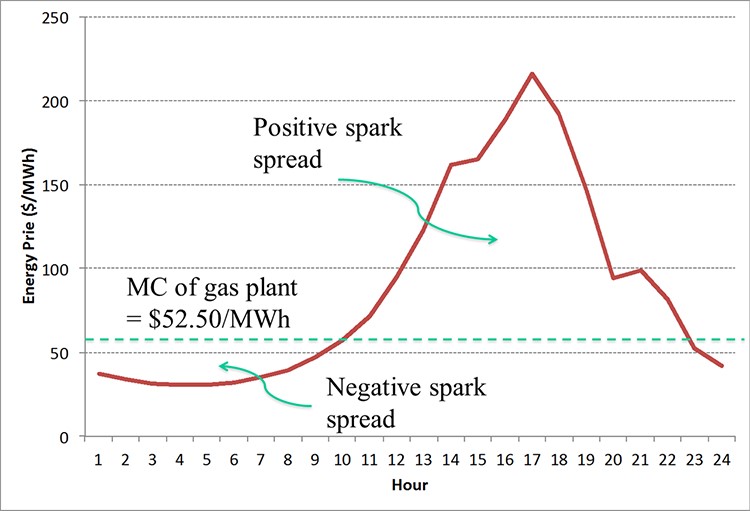 Figure 3: The spark spread is positive when the electricity price exceeds the cost of fuel for a representative power plant, and is negative when the cost of fuel exceeds the electricity price.
Credit: Seth Blumsack
‹ Locational Marginal Pricing up Financial Transmission Rights and Contracts for Differences ›
EBF 301:Global Finance for the Earth, Energy, and Materials Industries