Current and Future Energy Sources of the World

According to International Energy outlook 2016, the strongest growth in electricity generation is projected to occur among the developing, non-OECD nations. Increases in non-OECD electricity generation average 2.5%/year from 2012 to 2040, as rising living standards increase demand for home appliances and electronic devices, as well as for commercial services, including hospitals, schools, office buildings, and shopping malls. In the OECD nations, where infrastructures are more mature and population growth is relatively slow or declining, electric power generation increases by an average of 1.2%/year from 2012 to 2040. 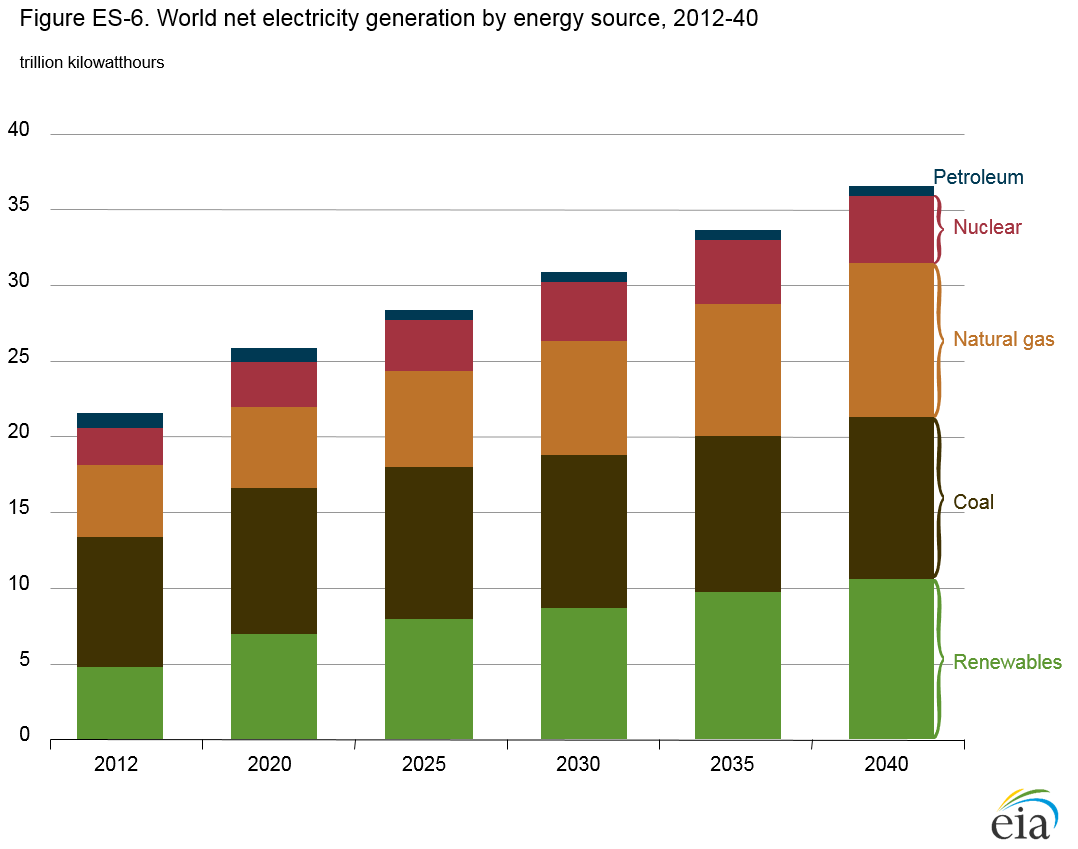 According to International Energy Outlook (2016) projections by US Department of Energy (US DOE), there is still considerable uncertainty about the future of nuclear power, and a number of issues could slow the development of new nuclear power plants. Issues related to plant safety, radioactive waste disposal, and proliferation of nuclear materials continue to raise public concerns in many countries and may hinder plans for new installations. Although the long-term implications of the disaster at Japan's Fukushima Daiichi nuclear power plant for world nuclear power development are unknown, Germany, Switzerland, and Italy have already announced plans to phase out or cancel all their existing and future reactors. In contrast, developing Asia is poised for a robust expansion of nuclear generation. Most of the increase is by China's addition of 139 gigawatts (GW) of nuclear capacity from 2012 to 2040.

In a nuclear plant, heat is produced by nuclear fission (splitting of an atom's nucleus into many new atoms) inside uranium fuel. As a result of fission, heat energy is released and the steam spins a turbine generator to produce electricity.

Among the industrialized nations, only Canada has plans to construct any sizable hydroelectric projects over the forecast period. Much of the expected increment in renewable energy consumption in the industrialized world is projected to be non-hydropower renewable energy sources, including particularly wind energy in Western Europe and the U. S. In addition, biomass and geothermal energy sources are expected to grow rapidly in the U. S.

In hydroelectricity, mechanical energy from the water being pulled downward by gravity is converted to electrical energy. More specifically, a hydroelectric generator directs the flow of water through a turbine, which extracts the kinetic energy from the movement of the water and turns it into electricity through the rotation of electrical generators. Hydropower is the largest single renewable electricity source today, providing 16% of world electricity at competitive prices. It dominates the electricity mix in several countries, developed, emerging, or developing.