Current and Future Energy Sources of the USA

US Energy Supply and Demand

When focusing on the energy supply and demand, it can be helpful to see where the energy is going. Which of our daily activities consume the most energy? Several agencies track this very closely. 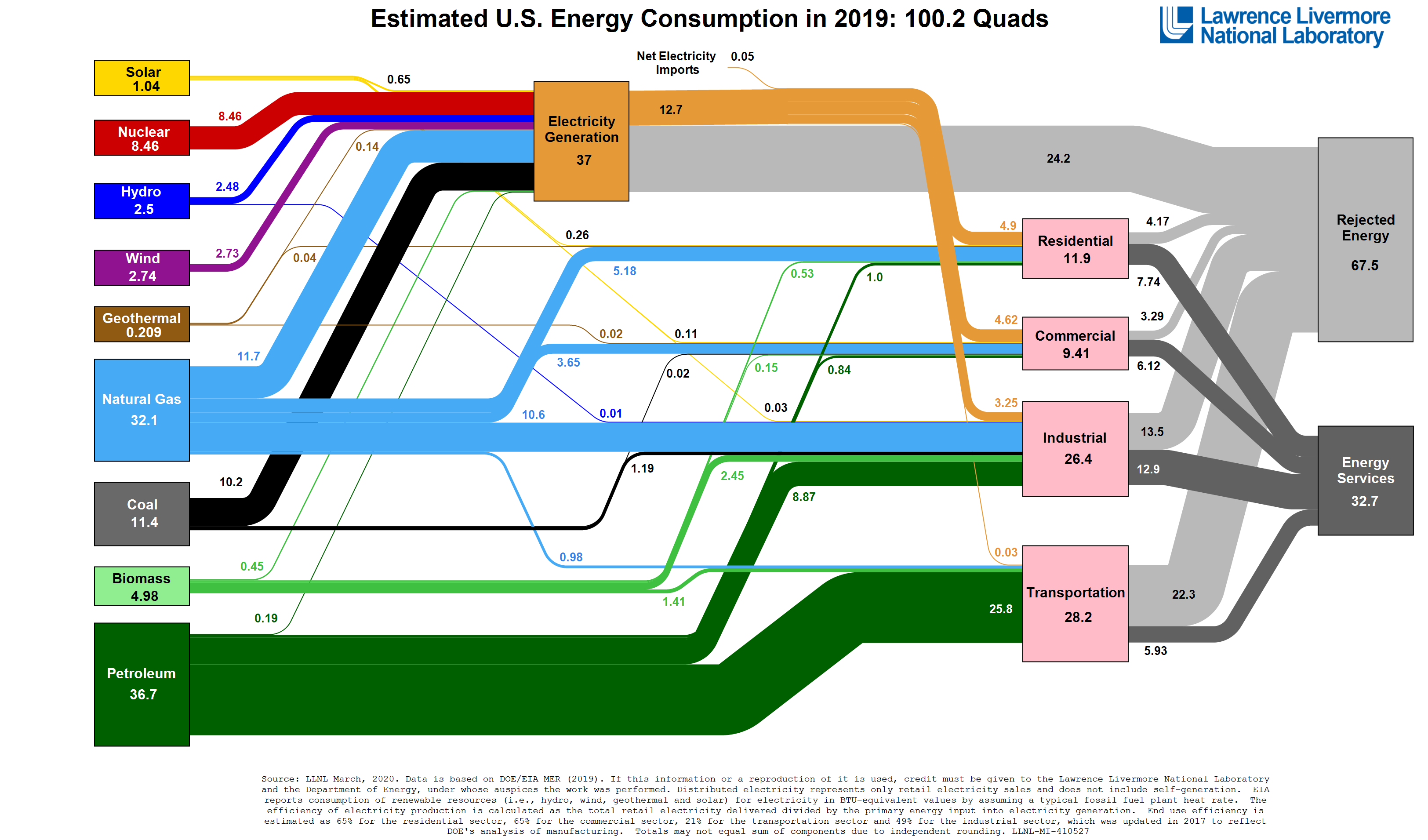 Globally, many interesting transitions are occurring. While the U.S. was once the top consumer of energy, China claimed this title in 2009.

As a result of innovations in oil and gas extraction, U.S. imports have dropped considerably. 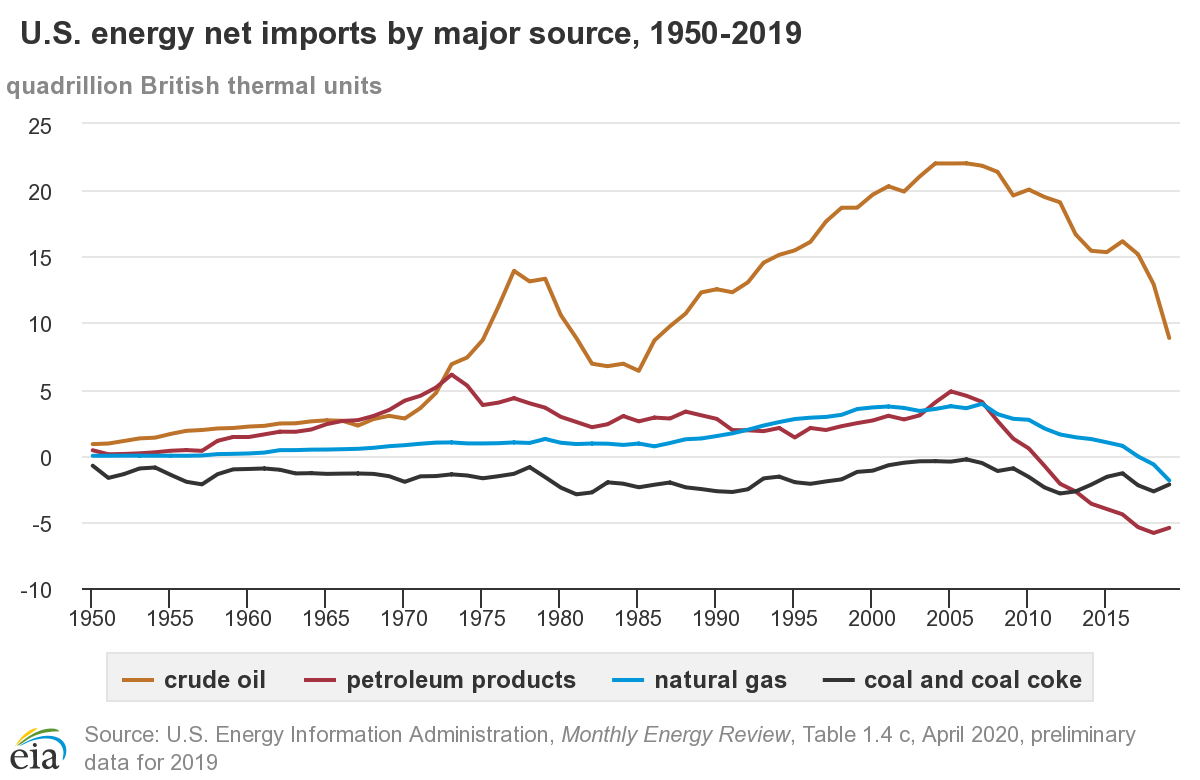 US Energy Imports between 1950 and 2019
Credit: EIA Energy Explained

Looking at the U.S. Energy Profile,  It can be seen from the imports profile that the US Crude oil imports have significantly reduced between 2005 and 2019 from a peak of 25 Quadrillion BTUs. Another significant change that can be noted is that the US is now exporting natural gas (below zero on the y axis) instead of importing it. Although crude oil is imported, US exports finished petroleum products resulting in less net imports. As a matter of fact, US total energy exports exceeded the imports in 2019 since 1950.

US Energy Consumption by Source and the chart of the US Energy consumption by source and user sector shows each energy source and the amount of energy it supplies in British thermal units (BTU). Petroleum is the leading source of energy in the US in 2019 with 36.72 quadrillion BTUs. Next is natural gas with 32.10 quadrillion BTUs. Coal supplies 11.31 quadrillion BTUs of energy. Renewable energy and nuclear power are responsible for 11.46 and 8.46 quadrillion BTUs respectively. Of the total petroleum consumption, 72% is used for transportation and another 23% is used by the industrial sector. Similarly, 35% of the natural gas (largest fraction) is used for power generation. On the other hand, 76% of the residential and commercial energy needs are met by natural gas. The actual percentages are not required to be memorized but answers to the questions such as: Which fuel is most used by power plants for power generation? Which sector uses petroleum the most? Approximately what fraction of the electricity is generated by renewable energy? (10, 25, 50 or 90) What is the primary purpose of coal use? etc. need to be answered.

US Energy Consumption by Source and Sector

The graph shows how dependent the U.S. is on our petroleum supply, as it accounts for almost 37% of our energy. Our next two highest sources of energy, like petroleum, are non-renewable and include natural gas and coal. Only about 11%  of our energy comes from renewable energy sources such as wood and water (hydroelectricity). According to Energy Information Administration, US renewable energy consumption surpassed coal for the first time in over 130 years in 2019. Of the 4.12 trillion kWh of electricity generated in the US, 38% was from natural gas, coal accounted for about 23% and nuclear adding another 20%. Renewable sources contributed to 17% of the total electricity generated. 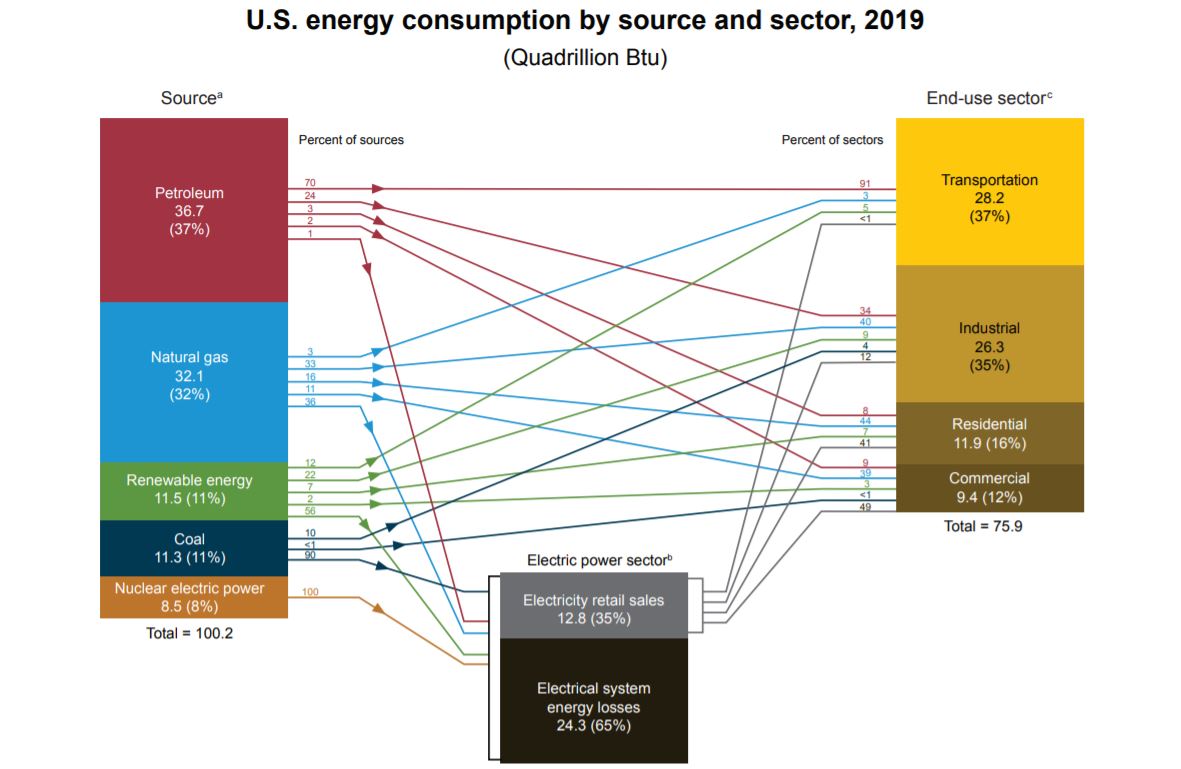 Graph of US Energy Consumption by Source and use by End Sectors
Credit: Energy Review Monthly, May 2020 by EIA

In 2019, fossil fuels made up 81% of total U.S. energy consumption, the lowest fossil fuel share in the past century. According to EIA projections, the percentage declines to 76.6% by 2040. Policy changes or technology breakthroughs that go beyond the trend improvements could significantly change that projection. In 2019, the renewable share of energy consumption in the United States was its largest since the 1930s at nearly 11.7%. The greatest growth in renewables over the past decade has been in solar and wind electricity generation. Liquid biofuels have also increased in recent years, contributing to the growing renewable share of total energy consumption. 2020 was the first year that renewables surpassed coal consumption in the U.S.

US Energy Consumption Over Time

The most significant decline in recent years has been coal: U.S. coal consumption fell by 41% since 2009 in a decade, from 997 million tons to 587 million tons. Biomass, which includes wood as well as liquid biofuels like ethanol and biodiesel, remain relatively flat, as wood use declines and biofuel use increases slightly. In contrast, wind and solar are among the fastest-growing energy sources in the projection, ultimately surpassing biomass and nuclear.

The plot of US energy consumption shows the relative amounts of each type of energy that was consumed for each year.  The history of the energy consumption profile of the United States indicates that petroleum makes the largest part of the energy demand over the past seven decades. Natural gas has taken the second over the past decade with the production of gas from shale. Coal has been replaced by renewable energy and natural gas for electricity generation. Among the renewable energy sources, biomass has the larger share followed by wind energy. Wind energy and solar energy are the fastest growing energy sources.

Growth of Renewables in the U.S.
EIA.gov

U.S. energy consumption projections by source and by sector.
https://www.eia.gov/outlooks/aeo/

Answers to the following questions need to be looked for in the material presented above.

The table below shows the vehicle fuel consumption and travel between 1960 and 2018.

Growth in electricity use for computers, office equipment, and electrical appliances in the residential and commercial sectors is partially offset by improved efficiency in these and other, more traditional electrical applications, by the effects of demand-side management programs, and by slower growth in electricity demand for some applications, such as air conditioning.

Most capacity additions over the next 10 years are renewables and natural gas, increasing the natural gas share to 26 percent and lowering the coal share to under 20 percent.  The nuclear generation (about 9 percent of total electricity supply in 2012) is projected to remain at about 9 percent in 2050.

Demand-side management programs address efficiency. By being more efficient, we can do more with less, and then reduce the demand for energy.