Another alcohol that can be generated from starch or cellulose is butanol, a four-carbon chain alcohol. There are usually two isomers: normal butanol (n-butanol) and iso-butanol. Their structures, along with ethanol, are shown below:

There are some advantages of butanol when compared to ethanol:

Table 7.4 shows a comparison of the energy content of various fuels in Btu/gal. The higher the value the more miles per gallon one can achieve; the Btu/gal value of butanol is close to the value of gasoline, and is higher than ethanol.

Butanol production is also a fermentation process – we’ll go over the differences in a little bit. There is a history regarding butanol production. It was known as the ABE process, or acetone, butanol, ethanol process. It was commercialized in 1918 using an enzyme named Clostridium acetobutylicum 824. Acetone was needed to produce Cordite, a smokeless powder used in propellants that contained nitroglycerin, gunpowder, and a petroleum product to hold it together – the acetone was used to gelatinize the material. In the 1930s, the butanol in the product was used to make butyl paints and lacquers. It has also been reported that Japanese fighter planes used butanol as fuel during WWII. The process of ABE fermentation was discontinued in the US during the early 1960s due to unfavorable economic conditions (made less expensively using petroleum). South Africa used the process into the 1980s, but then discontinued. There are reports that China had two commercial biobutanol plants in 2008, and currently, Brazil operates one biobutanol plant. There are three species of enzymes commonly used for butanol fermentation because they are some of the highest producers of butanol: Clostridium acetobutylicum 824, Clostridium beijerinckii P260, and Clostridium beijerinckii BA101. Figures 7.19a and 7.19b show micrographs of two of the fermentation enzymes used for butanol production. 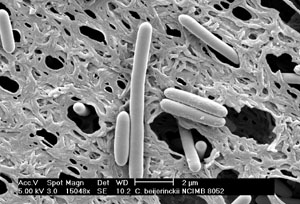 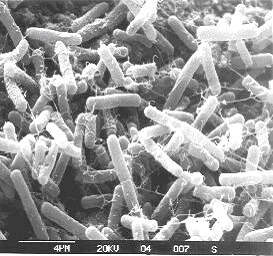 As in the conversion of starch to ethanol, the plants must be processed in a similar way, so I won’t repeat the five steps we just covered – we just use different enzymes, and end processing may be different because of the different chemicals produced. Starch must be hydrolyzed in acid before using the enzyme. And, as with using cellulose and hemicellulose as the starting material, it must first be pretreated to separate out the cellulose, then treated again to eventually produce glucose in order to make butanol from fermentation. Remember the glucose to ethanol reaction? Starch will produce the following products: 3 parts acetone (3 CH3-CO-CH3), 6 parts butanol (6 CH3-CH2-CH2-CH2OH), and 1 part ethanol (1 CH3-CH2-OH).

So, what feed materials are used for butanol production? Similar to what is used for ethanol production, which includes: 1) grains, including wheat straw, barley straw, and corn stover, 2) by-products from paper and sugar production, including waste paper, cotton woods, wood chips, corn fiber, and sugarcane bagasse, and 3) energy crops including switchgrass, reed canarygrass, and alfalfa. Table 7.5 shows the costs of various biomass sources.

The price and the availability of feeds determine what might be used to produce various biofuels. The feeds most available in the US are corn stover (2.4 x 108 ton/year) and wheat straw (4.9 x 107 ton/year). Other biomass substrates include corn fiber, barley straw and corn fiber at ~4-5 x 106 ton/year. Yields of butanol from corn and corn products by fermentation are shown in Table 7.6.

The solventogenic Clostridium species can metabolize both hexose and pentose sugars, which are released by cellulose and hemicellulose in wood and agricultural wastes; this is an advantage over other cultures used to produce biofuels. If all the residues available were converted into acetone-butanol (AB), the result would produce 22.1 x 109 gallons of AB. In 2009, 10.6 x 109 gallons of ethanol was produced, but that was only equivalent to 7.42 x 109 gallons of butanol on an equal energy basis.

There are several issues that are a challenge to producing AB in a traditional batch process: 1) product (butanol) concentration is low 13-20 g/L, 2) incomplete sugar utilization (<60 g/L), and 3) the process streams are large. These issues are due to severe product inhibition. Other issues include: 1) butanol glucose yield low, 22-26%, 2) butanol concentration in fermentation is low, 1.5%, 3) butanol concentration of 1% inhibits microbial cell growth, 4) butanol fermentation is in two phases, and 5) feedstock cost is high.

One of the more important considerations of butanol production is limiting the microbial inhibitory compounds. These compounds include some compounds related to lignin degradation, including syringaldehyde, coumaric acid, ferulic acid, and hydroxymethylfurfural.

As an example of one particular process, wheat straw was processed using a separate hydrolysis, fermentation, and recovery process. The following conditions were used: 1) wheat straw milled to 1-2 mm size particles, 2) dilute sulfuric acid (1% v/v) pretreatment at 160 C for 20 min., 3) mixture cooled to 45 C and hydrolyzed with cellulase, xylanase, and β-glucosidase enzymes for 72 h, followed by centrifugation and removal of sediments, 4) fermentation with C. beijerinckii P260 (fermentation gases CO2 and H2 were released to the environment, but could be captured, separated and used in other processes, and 5) butanol removed by distillation. For this particular process, the production of ABE was relatively high, with butanol and acetone being the major products. The reaction was done in a batch reactor and no treatment was used to remove inhibitor chemicals. Table 7.7 shows the process with wheat straw, barley straw, corn stover and switchgrass. Wheat straw did not need to be detoxified, but the others did. Detoxification can be done with adding lime (a weak base) or using a resin column to separate out the components.

ABE production. The wheat straw goes into milling and then into treatment where it is treated with H2SO4, BuOH and water. It then goes into hydrolysis with enzymes. Out of hydrolysis Lignin is removed and the rest of the product continues to fermentation. During fermentation CO2 and H2 are removed and after fermentation, the solids are removed. After that Acetone and ethanol are recovered.

So, what can be done to overcome butanol toxicity? What kind of downstream processing needs to be done to separate out the wanted components? The butanol level in the reactor has to be kept to a certain threshold in order to reduce toxicity to the culture and utilize all the sugar reactants.

First of all, these are the typical processing steps that must be utilized in some form for most refining units (the upstream processing includes pretreating the raw material, similar to what we discussed in Lesson 5): 1) sorting, 2) sieving, 3) communition (size reduction by milling), 4) hydrolysis, and 5) sterilization. The next main stage is the bioreaction stage: metabolite biosynthesis and biotransformations. The final aspect of processing is downstream processing, and the methods used depend on the products made. To separate solids, filtration, precipitation, and centrifugation take place. Flocculation can also be done. To separate liquids, several processes can be done: 1) diffusion, 2) evaporation, 3) distillation, and 4) solvent-liquid extraction.

For butanol processing, there have been several processes developed to reduce the level of toxicity. These include: 1) simultaneous saccharification, fermentation, and recovery (SSFR), 2) gas stripping (using N2 and/or fermentation gases – CO2 and H2), 3) cell recycle, 4) pervaporation (combination process of permeation/evaporation using selective membranes), 5) vacuum fermentation, 6) liquid-liquid extraction, and 6) perstraction (combination of solvent extraction and membranes for permeation). The goal is to convert all the sugars to acetone and butanol, but remove the products as they are produced to decrease toxicity. We’ll discuss more about liquid-liquid extraction (or solvent extraction) when we get to the lesson on biodiesel.

‹ 7.3b How Corn is Processed to Make Ethanol up 7.5 Assignments ›
EGEE 439: Alternative Fuels from Biomass Sources