Many researchers and scientists think that ground transportation will become increasingly dependent upon batteries, as in hybrids and electric vehicles. Reduction in fuel usage has been realized in the last 10 years, due to hybrid automobiles coming into the auto market. However, this is not a viable option for air travel, which will remain dependent on liquid fuel. Since more fuel will be available for aircrafts if less is used for vehicles, petroleum refineries should be able to keep up with demand. However, if there is a concern about emissions, especially the need to reduce CO2, liquid jet fuels from biomass will by far be the best option. Jet fuel must also go through a qualification process and become certified for use depending on the source of the fuel and the type of jet engine. As discussed briefly in Lesson 2, jet fuel should have certain properties. Table 8.3 shows some of the ASTM qualifications for jet fuel that currently exist.

The Federal Aviation Administration has been working diligently to get some alternative fuels available in the market. The government has aspirational goals for American airlines to utilize alternative jet fuel, with the hope of 1 billion gallons of alternative jet fuel per year by the year 2018. Airlines will need to meet this requirement either by purchasing alternative jet fuel or finding viable methods to produce alternative jet fuel. The expectations for jet fuel are that it be primarily composed of long chain alkanes (although shorter carbon chain lengths than diesel fuel) with some cycloalkane and/or aromatic content for the necessary O-ring lubrication and other reasons.

There are several known biomass materials that could be utilized in the production of jet fuel. These include fats/oils, cellulose, woody biomass, and coal.

One of the primary sources is vegetable oil (this also includes algae oil and fats from production of meats). Vegetable oils contain long chain hydrocarbons connected by three carbons as esters. The fatty acid portion of the oil is easily converted into fatty acid methyl esters (FAMEs) through transesterification to produce biodiesel. We will discuss biodiesel production for transesterification extensively in another lesson, but I will briefly discuss here why the FAA is interested in making jet fuel from fats and oils. Unfortunately, currently, FAMEs are an issue for biojet fuel and requirements include a limit of 5 ppm, as the FAMEs can cause corrosion, have a high freeze point, and are not compatible with materials in a jet engine. (Fremont, 2010) At present, biodiesel production is not always economic due to the high cost of oils and the method of production, and the ester must be removed for jet fuel.

Therefore, other methods are being evaluated to produce not only biodiesel, but also biojet fuel. These process methods include Hydroprocessed Esters and Fatty Acids (HEFA), Catalytic Hydrothermolysis, and Green Diesel. (Hileman and Stratton, 2014) Figure 8.6 shows a schematic of the process for HEFA. Jet fuel made from HEFA has been approved for use in airplanes because it has gone through the approval process. The following white paper, Alternative fuels specification and testing, (Kramer, S., 2013, March 1, Retrieved December 16, 2014) includes a schematic of the approval process on page 4; as you can see, it is a thorough and complicated process, and it takes quite some time to get a particular type of fuel qualified.

There are others who want to explore the use of the fluid catalytic cracking (FCC) unit in a refinery to convert vegetable oils into jet fuel. Al-Sabawi et al. (CanmetENERGY) provided a review of various biomass products that have been processed at a lab scale in the FCC unit. They show that the main effect would be on the catalyst used and the lifetime of the catalyst. (Al-Sabawi, 2012) 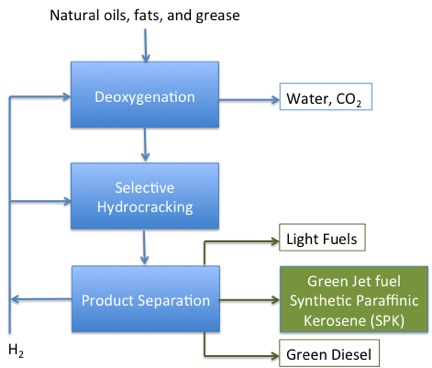 Mullens and Boateng of the USDA have developed a process to produce pyrolysis oils of low oxygen content (data of properties of fuel in previous section). (Mullens, 2013) The review paper by Al-Sabawi et al. also discusses potential processing of pyrolysis oils in the FCC unit. The main requirement is the pyrolysis oils need to be low in oxygen, but additional information on the composition of the oil could tell us whether the FCC unit or another unit in a refinery would be best for processing.

Cellulosic sources for producing alternative jet fuel can be used. By use of gasification of biomass and Fischer-Tropsch processing, a good biojet fuel can be produced, although some additives need to be included to prevent some potential problems. There are also processes to produce medium chain length alcohols from cellulose, as methanol and ethanol does not have the energy density necessary to allow planes to fly long distances. One of the fuels that made it through the approval process is Synthetic Paraffinic Kerosene (SPK) made by Fischer-Tropsch synthesis. (Hileman and Stratton, 2014) It may also be possible to use by-products from production of ethanol from corn (corn stover), sugar cane (bagasse), and paper production (tall oil). Westfall et al. (2008) and Liu et al. (2013) have also outlined other potential sources to produce fuels, with most processes including a catalytic deoxygenation aspect. (2008) The next section of this lesson will discuss Fischer-Tropsch and other chemical processes to make liquid fuels; it is an indirect method, as either natural gas or carbon materials that have been gasified must be used in these processes.

Additionally, there are some processes being developed for the production of alternative jet fuel from biomass-natural gas and biomass-coal. Researchers are working to develop processes at the demonstration scale for eventual commercialization. Virent, along with Battelle in Ohio, have produced ReadiJet Fuel using a pilot scale facility. (Conkle et al., 2012a, 2012b) Their paper includes a diagram of a schematic of their process (p. 3), a catalytic process to deoxygenate oils similar to the HEFA process. Liu et al. point out that jet fuel from natural gas has some advantages, especially the transportation aspect of fuels (2013). Jet fuel made from natural gas is made via steam reforming to CO and H2, then use of the Fischer-Tropsch method to make long chain alkanes (see additional explanation toward the end of the lesson). The fuel is very clean (no sulfur and no aromatics) and can be a drop in replacement for petroleum derived jet fuel - jet fuel made in this way has been thoroughly tested and the fuel has been qualified for use in military and commercial jet airliners so long as the alternative fuel composes less than 50% of the fuel mixture. Penn State and the Air Force have been involved with the production of a coal-based jet fuel (Balster et al., 2008) that could possibly be co-processed with some type of bio-oil, such as vegetable oil or low-oxygen pyrolysis oil. The potential for using the coal-based jet fuel lies in its high energy density, superior thermal properties, and few issues with lubricity. Table 8.4 shows how the fuel produced by Battelle/Air Force and PSU/Air Force meets some of the ASTM requirements; Battelle’s fuel has been certified, but PSU’s fuel has not completely met certification criteria. Recently, Penn State received DOE funding to expand the solvent extraction unit to a continuous reactor and will use solvent from Battelle’s process to extract the coal – the goal is to incorporate coal into a biomass process in a more environmentally sound way than using other solvents. Figure 8.7 shows a schematic of the PSU unit. Elliot et al. (2013) at Pacific Northwest National Laboratory have developed a specific hydrothermal process to convert algal water slurries into organic hydrocarbons at subcritical water conditions (350 °C and 20 MPa pressure). The process also includes catalytic processes to remove oxygen, sulfur, and nitrogen, and the liquids generated are most likely of fuel quality.

*No additives were included in these fuels for these tests. Balster et al., Conkel et al. 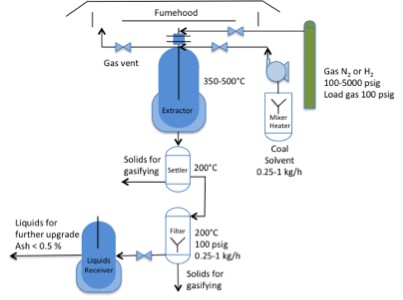