So, what can be done with synthesis gas? It can be burned and used in a gas turbine to heat exchange the heat to produce steam and operate a second turbine for electricity. The gas can be fed to a solid oxide fuel cell to generate electricity. We can also use synthesis gas to generate fuels, chemicals, and materials. In fact, the dominant application of synthesis gas from coal is the production of synthetic hydrocarbons for transportation fuels – Fischer Tropsch (FT) synthesis. This is what is primarily done in South Africa by the company Sasol and was also one of the methods used by the Germans in WWII to generate liquid fuels; in fact, direct liquefaction was the primary method used to produce liquid fuels in Germany in the 1940s. However, it is not the only gasification to liquids process. As noted in Lesson 4, the FT synthesis reaction can be presented by:

We are taking carbon atoms and building them up as alkanes, containing up to at least 20 carbon atoms. It is really a polymerization process, and it follows polymerization statistics. Figure 8.9 shows a typical polymerization statistical function. You will not obtain one single pure alkane from the FT process, and there will be a distribution of products. As with all chemical reactions, you will have reaction variables to adjust, such as temperature, pressure, residence, and addition of a catalyst. By skillful selection of variables (T, P, t, and catalyst), we can, in principle, make anything from methane to high molecular weight waxes. The intent is to maximize liquid transportation fuel production. 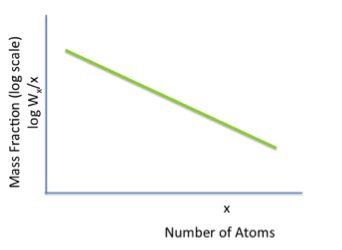 Figure 8.9: Polymerization statistics for FT synthesis, where Wx is the weight fraction of compound with x atoms.
Credit: Dr. Caroline B. Clifford

The primary process for FT is the Synthol Process; the schematic is shown in Figure 8.10. The synthesis gas goes into the reactor at 2.2 MPa of pressure and 315-330°C. The product leaves the reactor where the catalyst is recovered, oils are removed by a hydrocarbon scrubber, and the tail gas recovered. The gas part is recycled, and the rest of the material is then distilled into gasoline, jet fuel, and diesel fractions. The Synthol reactor is a fluid bed reactor that uses an iron-based catalyst. 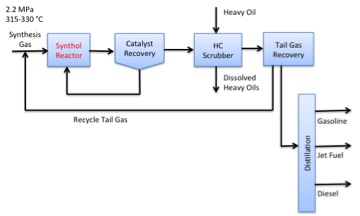 Synthesis gas enters the synthol reactor. From there it moves onto the catalyst recover. The gas can then return to the synthol reactor or proceed to the HC scrubber where heavy oil is introduced. Dissolved heavy oils are removed and everything else moves onto tall gas recovery. The tall gas is then recycled and everything else moves to distillation where it goes on to become gasoline, jet fuel and diesel.

The liquids produced make very clean fuels. The product is near zero sulfur and low in aromatic compounds, and it is composed of mainly straight-chain alkanes. When considering the carbon-steam reaction, it is an endothermic reaction (the gasification, need to add heat). In this case, the reaction is “backward," or going the other direction. Therefore, the FT synthesis reaction is an exothermic reaction. Because the reaction is exothermic, heat is generated, so Synthol reactors have internal cooling tubes with steam that when heated generate high-pressure steam that can be used in other processes.

Jet fuel made from FT synthesis makes a decent fuel. It is low in aromatic and sulfur content. It is the first bio-based jet fuel that has been certified for use in aircraft and has been tested in blends with major airlines (Virgin). However, for use in military jets, it must be blended because newer designs use the fuel as a coolant for electronics, as the fuel can have issues in these aircraft. For example, alkanes have the lowest density of various compound classes in jet fuel, so FT jet fuel has borderline volumetric density. Alkanes are also likely to undergo pyrolysis reactions at certain high temperatures, and if the fuel is used as a heat-exchange fluid to reduce the heat load, carbon formation can occur – this is mainly a problem for some of the newer military jet aircraft.

FT gasoline that comes straight off of the reaction is not great gasoline, as it has a low octane number. Recall that branched alkanes and aromatic compounds have higher octane numbers. Since FT compounds tend to be straight-chain alkanes, the isomerization is required, and an appropriate catalyst must be used for catalytic reforming.

The primary location for gasification and FT synthesis is in South Africa – the gasoline being sold in South Africa has an octane number of 93. An integrated plant will also produce aromatics, waxes, liquid petroleum gas, alcohols, ketones, and phenols in addition to liquid hydrocarbon fuels. The reasoning behind marketing multiple products is because all the products will go up and down in price; when something goes up in price, you make more of it, when something goes down in price, you may make less. This is a way for plants to maximize their profits.

Synthesis gas can also be used to produce methanol, CH3OH. The current technology for making methanol is fairly mature. Typically natural gas is used as the feedstock, which is steam reformed to make CO and hydrogen:

Then methanol is synthesized by the reaction:

However, another methanol synthesis reaction allows for CO2 to be in the feed gas:

But because water and methanol are infinitely soluble, an additional step is required downstream to isolate methanol from water. Typical operating conditions in the methanol synthesis reactor are 5-10 MPa pressure, 250-270°C, using a copper/zinc catalyst. The reaction is extremely exothermic, so heat must be removed to keep the reaction under control. Similar to the FT reaction, the reactor has a shell and tube heat exchanger where the coolant is circulated through the shell, and catalyst particles are packed into the tubes where the reactant/product liquids flow. Figure 8.11 shows a schematic of the methanol synthesis process. 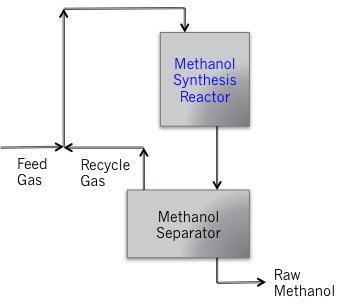 So, what can methanol be used for? It is periodically used as a replacement for gasoline, particularly for racing fuel, as it has a high octane number. It has no sulfur in it, will produce almost no NOX due to the low flame temperature and can be blended with gasoline.

There are also some disadvantages to using methanol as a fuel. It is infinitely miscible with water, it has health and safety issues, provides only half the volumetric energy density of gasoline, and may have compatibility issues with materials in some vehicles.

Enormous tonnages of methanol are produced and handled annually with excellent safety – but within the chemical process industry. However, if the general public is handling methanol, safety may be an issue, because methanol has toxic properties. Methanol is being seriously considered as the fuel of choice in the use of fuel cells. However, there is a process to make methanol directly into gasoline, so concerns about methanol aren’t an issue then.

Methanol can be used to make a gasoline product. The process uses a special zeolite catalyst with pore size such that molecules up to C10 can get out of the catalyst. Larger molecules cannot be made with this process; therefore, a product is made with no carbon molecules greater than C10, which boils in the gasoline range. In this process, aromatics and branched-chain alkanes are made, which means the MTG process produces very high octane gasoline. Gasoline is the only product. In the reaction, methanol is converted into dimethyl ether (which can be a good diesel fuel) by the following reaction:

As the reaction progresses, the dimethyl ether is dehydrated further to the product hydrocarbons. The overall reaction is:

As with the other reactions we’ve looked at in this section of the lesson, the reaction is highly exothermic, so the reactor and process has to be designed to remove heat from the reaction to keep it under control. The conditions for this reaction are 330-400°C and 2.3 MPa. If one wanted to envision how a plant could incorporate all of these processes together, the following would be one scenario:

The plant then produces gasoline, diesel, and electricity.