Please read the “Overview” section (through page 14) from " Managing Variable Energy Resources to Increase Renewable Electricity’s Contribution to the Grid."

The terms “renewable energy resources” and “variable energy resources” are often used interchangeably when applied to electric power generation. The two are, in fact, not the same, although there is some overlap. The term “Variable Energy Resource” (VER) refers to any generation resource whose output is not perfectly controllable by a transmission system operator, and whose output is dependent on a fuel resource that cannot be directly stored or stockpiled and whose availability is difficult to predict. Wind and solar power generation are the primary VERs, since the sun does not shine all the time (even during the day, clouds and dust can interfere with solar power generation in surprising ways) and the wind does not blow all the time. In some cases, hydro electricity without storage (so-called “run of river” hydro) could be considered a VER since its output is dependent on streamflows at any given moment. VERs are, in some sense, defined respective to so-called “dispatchable” or “controllable” power generation resources, which encompasses fossil-fuel plants, nuclear, and some hydro electricity (with reservoir storage). The VER concept is pretty vague if you think about it – after all, coal or natural gas plants can sometimes break, so don’t have perfect availability. Fuel supply chains can also be disrupted for fossil plants. In addition, the “variable” aspect is, at least in concept, nothing new for system operators. Demand varies all the time and system operators are able to handle it without substantial negative impacts.

Keep in mind that the “variability” of VERs is different over different time scales. Figures 7-9 of “Managing Variable Energy Resources to Increase Renewable Electricity’s Contribution to the Grid” show how wind and solar are variable over time scales of days or fewer. Figure 7.1, below, shows wind energy production in the PJM RTO every five minutes over a period of two years. This figure shows how wind production varies seasonally and also inter-annually, with windier and less windy years. 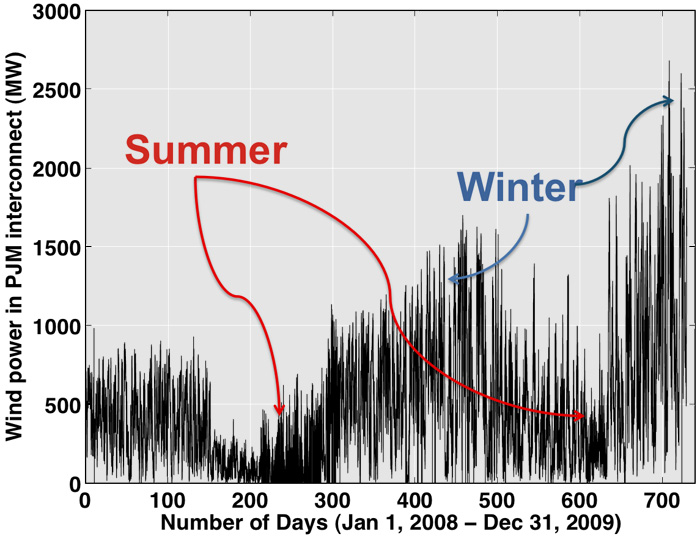 Variability with respect to electricity demand is also important. If you think about it, electric system operators don’t really care about variability in demand or in VERs per se – what they care about is being able to match supply and demand on a continuous basis. If variability between VERs and demand were perfectly synchronous, so that VERs would increase (or decrease) in output right at the moments when demand increased or decreased in output, then there would be no problems. If VERs and demand are anti-correlated or perfectly asynchronous, that poses more of a challenge. Part of the challenge with the wind in Vermont, as you have read, is that the wind tends to blow most strongly at night when there is less electricity demand and the power plants that are serving that demand are inflexible “base load” units that are difficult to ramp down. This is typical of wind – Figure 7.2 shows (normalized) wind and electricity demand by season in the PJM RTO. Solar, on the other hand, is much more highly correlated with electricity demand (at least on a day-to-day basis). 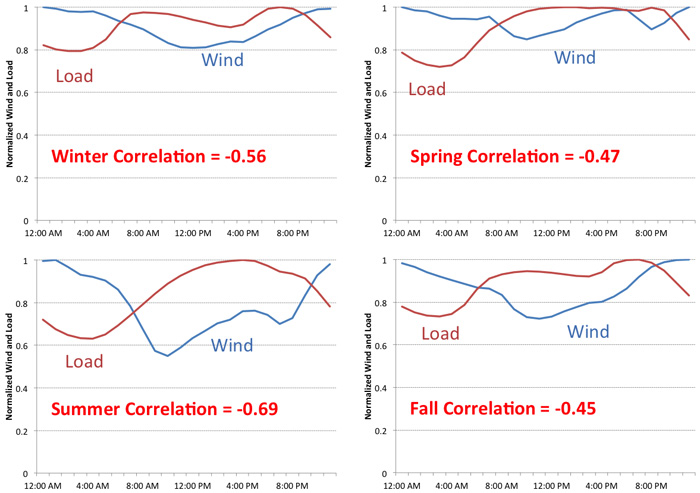 Whether or not you believe that there is anything “special” about VERs, electric grid operators around the world are rethinking the way that they plan and operate their systems and markets in order to accommodate various forms of policy that are promoting investment in VERs. Read the introductory portion of Chapter 4 of Energy Storage on the Grid and the Short-term Variability of Wind and pp.15-20 of “Managing Variable Energy Resources to Increase Renewable Electricity’s Contribution to the Grid,” which discuss various types of strategies that grid operators have been using to manage large-scale VERs on the grid. As you may have gathered from the Vermont article, some of the control strategies used most often by grid operators (such as manually curtailing wind energy output during periods when supply exceeds demand) have also been the most controversial.

More generally, there are three economic challenges relevant to VER integration, each of which we will discuss in a bit more detail.